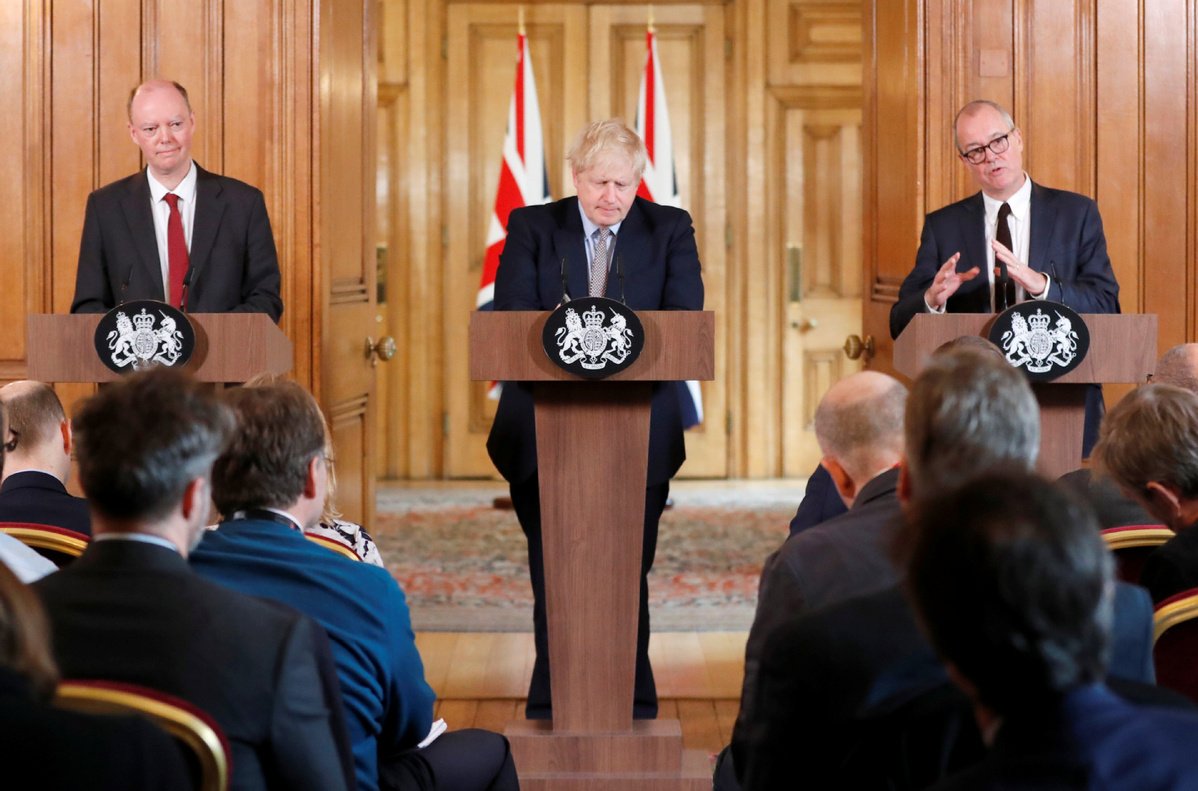 The United Kingdom will launch a public information campaign this week to tell people how to limit the spread of the novel coronavirus and the respiratory disease it causes.

The campaign will focus on regular hand-washing, sneezing into tissues, and keeping surfaces clean.

Meanwhile, the government is making contingencies for up to a fifth of the UK workforce to be on sick leave if the virus fully breaks free.

Because of anticipated staff shortages, the nation's police force may only respond to serious crimes, the government added. It said the army will support the emergency services, if needed.

Attendees also discussed widespread school closures, the cancellation of major sporting events, and encouraging working from home, although the measures are not yet in place.

The government also expects many non-urgent hospital procedures to be cancelled, so medics can focus on treating people with the disease.

Johnson said the number of infections is likely to rise considerably from the 51 cases confirmed as of Tuesday lunchtime.

He told the BBC's political editor Laura Kuenssberg: "The most important thing now is that we prepare against a possible very significant expansion of coronavirus in the UK population."

He said additional "protective measures" will be announced as they become necessary, noting it is "much more likely than not that we will face a challenge in the weeks, months ahead".

Earlier, Public Health England said the widespread transmission of the virus in the UK had become "highly likely".

Johnson said the plans, which were published on the government's website on Tuesday, include a "range of calibrated responses to the spread of coronavirus".

The Express newspaper quoted him as saying the government's priority is to "contain, delay, research, mitigate".

Johnson said: "Our plan means we are committed to doing everything possible, based on the advice of our world-leading scientific experts, to prepare for all eventualities."

The European Union, meanwhile, raised its risk level to "high".

European Commission President Ursula von der Leyen said:" (The European Centre for Disease Prevention and Control) has announced … that the risk level has risen from moderate to high for people in the European Union, in other words the virus continues to spread."

CNBC, the United States business television channel owned by NBC, reported on Tuesday that the worst-affected European nation, Italy, will boost its spending in the face of 2,041 confirmed cases and 52 deaths there as of Tuesday morning.

Italy's Council of Ministers is expected to sign off on the 3.6-billion-euro ($4 billion) financial package on Friday that will support beleaguered sectors, including tourism and transportation.

The broadcaster said hospitals in the Lombardy region, at the center of the country's outbreak, are struggling to cope.

Giulio Gallera, the region's top health official, told the Italian news channel Sky TG24 that 10 percent of Lombardy's doctors and nurses had tested positive and were off work.

Elsewhere, the illness has spread extensively in Western Europe, with Portugal reporting its first two cases on Tuesday.

As of Monday, the EU had 2,199 confirmed infections, with the vast majority in Italy.

The European Centre for Disease Prevention and Control said: "Most cases reported in the EU/EEA and UK outside some regions in Italy have identified epidemiological links. However, there is an increasing number of cases without a defined chain of transmission."

Christine Lagarde, president of the European Central Bank, said it was too early to say whether the outbreak will cause a "long-lasting shock" to the EU's economy.

In Iran, the disease has killed a senior advisor to Supreme Leader Ayatollah Ali Khamenei. Unconfirmed media reports say 23 members of the country's Parliament have now tested positive for the disease. The nation has reported at least 1,501 cases and more than 66 deaths.