The British are famously keen on preserving old things. They find it hard to let go. Double-decker buses, black taxi cabs, and those little red phone boxes around the country still look like the ones in the 20th century, the time when they were designed. 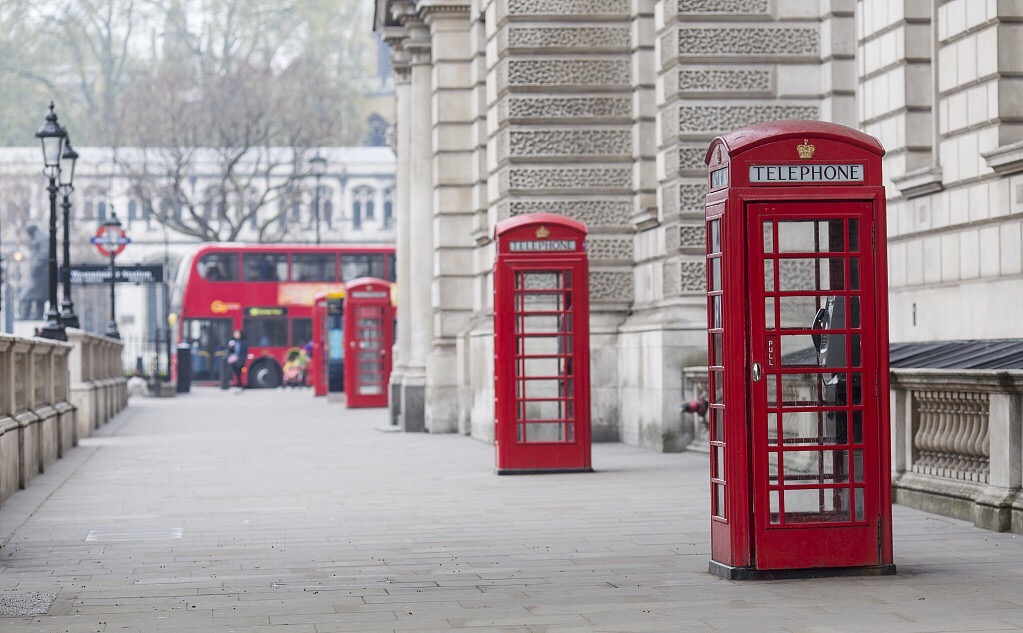 Unlike other public artifacts, the rise of mobile phones has squeezed outdoor payphones out of daily use since the 1980s. The original red cast-iron boxes with the domed roofs, called Kiosk No. 2 or K2, first appeared in 1926, and have been part of the British landscape for a long time.

Instead of consigning iconic kiosks to scraps, British Telecom (BT) launched an "Adopt a Kiosk" scheme in 2008 as a way for communities to retain one of these red phone boxes and transform them in imaginative ways.

BT said thousands of people have already come up with fantastic ideas to re-use their local phone box, particularly in rural areas. It only costs £1 to adopt a phone box. 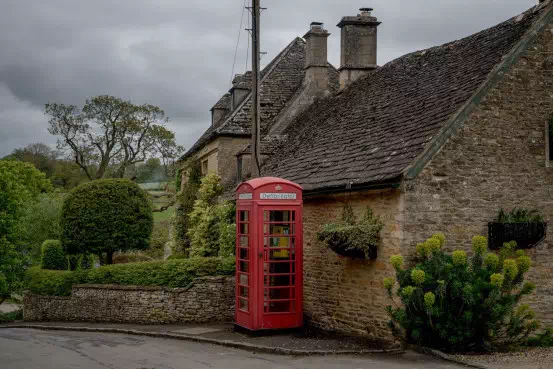 BT said nearly half of the phone boxes in the UK have been removed, but around 8,000 of them can still be adopted.

The Community Heartbeat Trust, UK' s community defibrillator charity, has installed defibrillators in disused phone boxes across the country, especially in the villages where medical help cannot reach in time. 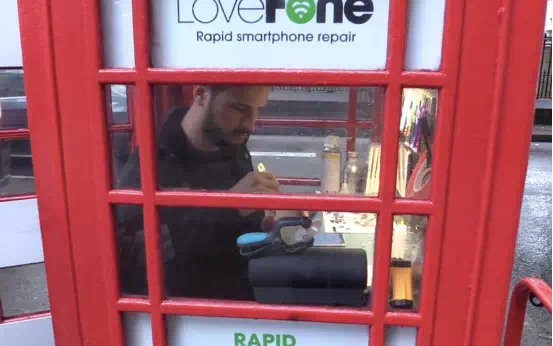 LoveFone, a company that advocates repairing cellphones rather than disposing of them, opened a cellphone repair workshop in a London kiosk in 2016.

Fouad Choaibi, who has his own repairing business in Spain, joined the project two years ago. He thought it was a great idea to open a business in a small telephone box. "When you are a guy inside a phone box, people get curious and stop to ask, 'hey', said Fouad, "and you get familiar with the community.”

Business in the red boxes also made economic sense. The New York Times reported that one of the shops generated $13,500 in revenue a month and only cost around $400 to rent. 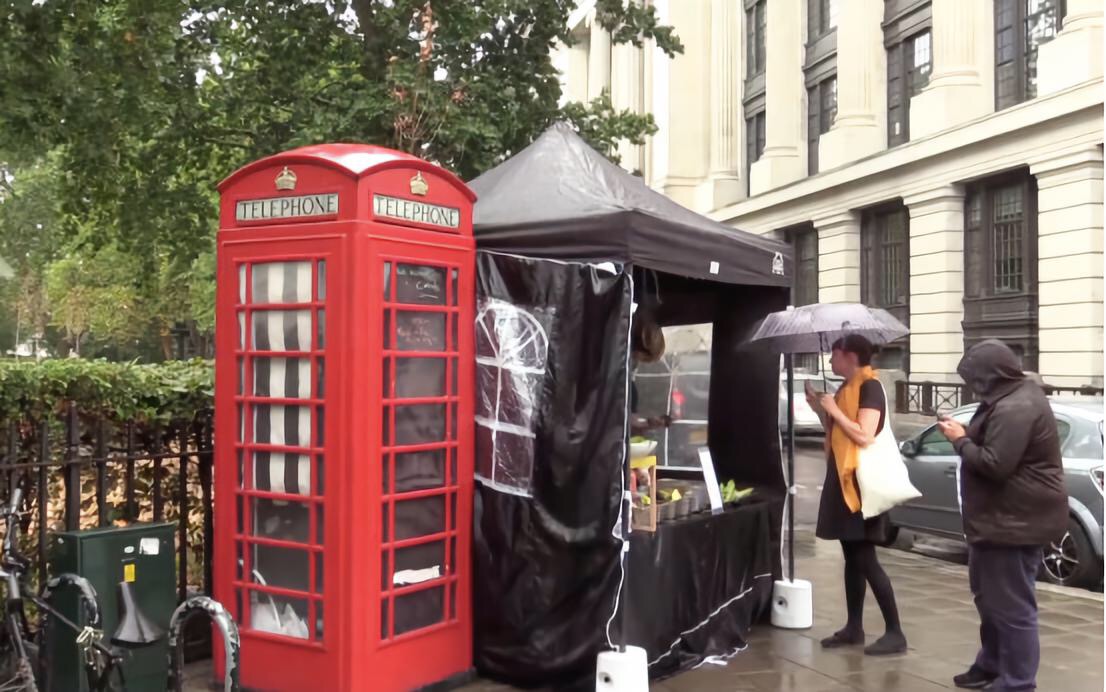 A falafel and salad bar (Screen shot of VCG video)

Red telephone booths also reappear as a miniature library and falafel and salad bar in London's Holborn district. In addition to refusing to let go, the British bring new life to these relics. 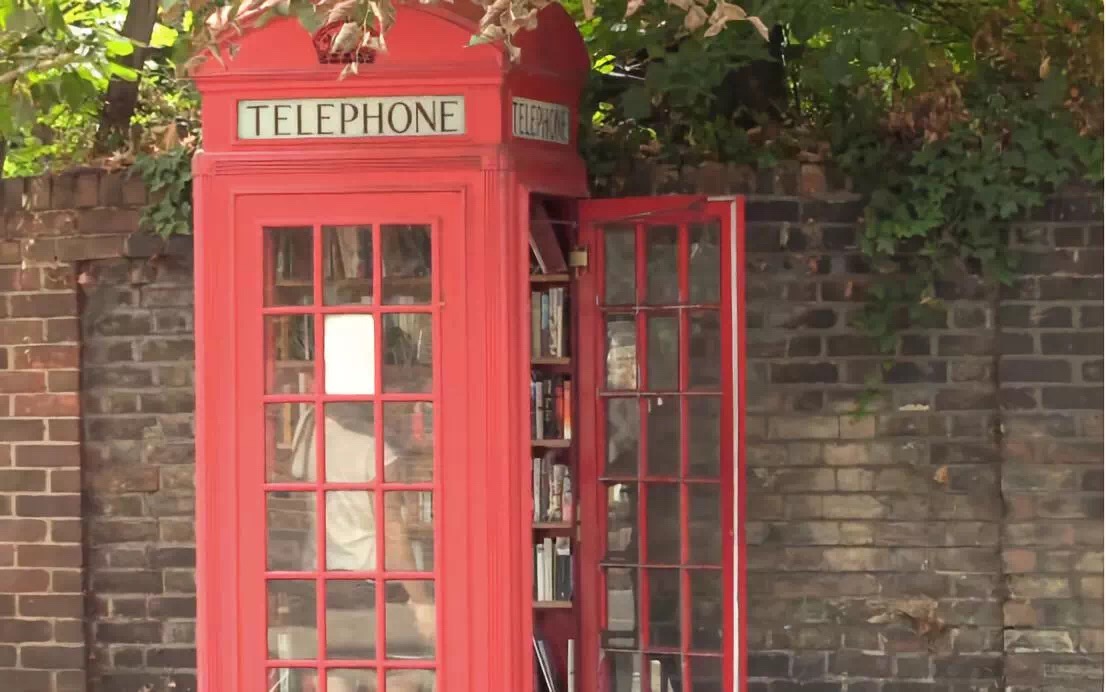 "We are obsessed with the old, and that' s because our experience of the modern world has been bruising," Dan Snow, a well-known historian and broadcaster, told the New York Times. "If you look around at the things that people are very nostalgic about, they are things that remind older people of our imperial and hegemonic past."