WORLD Idai 'one of the worst' storms to hit S. Africa

Idai 'one of the worst' storms to hit S. Africa

Cyclone Idai may be one of the worst natural disasters to hit southern Africa in living memory, said a UN spokesman on Wednesday of the storm that has killed at least 360 people.

Farhan Haq, deputy spokesman for UN Secretary-General Antonio Guterres, gave a grim report of the destruction left by the cyclone that hit parts of Malawi, Mozambique, and Zimbabwe.

"What we want to do is underscore the sheer level of this crisis," Haq said. "This may be one of the worst national disasters to hit southern Africa in living memory and we will need to do quite a lot."

He told a regular briefing that what is needed is not yet known "because of the amount of the damage that's been created and the inaccessibility to the area."

"Our humanitarian colleagues report that the UN's humanitarian chief, Mark Lowcock, allocated 20 million U.S. dollars from the UN's Central Emergency Response Fund to complement the efforts of the governments of Mozambique, Zimbabwe and Malawi to provide assistance to communities affected," Haq said.

"Lowcock noted that the allocation would be insufficient to respond to the expected rise in the level of need, and urged donors to contribute to the response," the spokesman said. 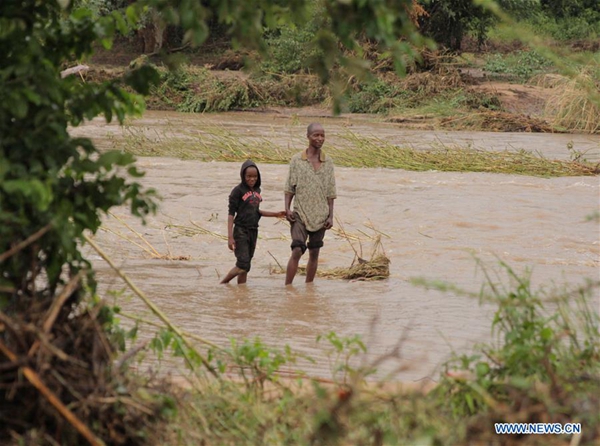 In Malawi, nearly 1 million people were affected, with 56 deaths and 577 injuries recorded, the UN Office for the Coordination of Humanitarian Affairs said. More than 82,700 people are estimated to be displaced.

In Mozambique, according to the government, at least 202 people are confirmed dead. The death toll is expected to rise, Haq said. An estimated 260,000 children have reportedly been affected, according to UNICEF, the UN Children's Fund.

"In Zimbabwe, at least 102 deaths and over 200 injuries have been reported, and more than 200 people are reportedly still missing," said Haq. "Relief trucks carrying shelter, non-food items and water and sanitation supplies have arrived, and distribution is under way in some areas."

The World Food Programme has pre-positioned food stocks ready to deploy and other agencies are mobilizing stocks, particularly for health and water and sanitation interventions, the spokesman said.