WORLD If the US really wants to 'stand with the Cuban people,' it should learn more from China: Cuban diplomat

If the US really wants to 'stand with the Cuban people,' it should learn more from China: Cuban diplomat 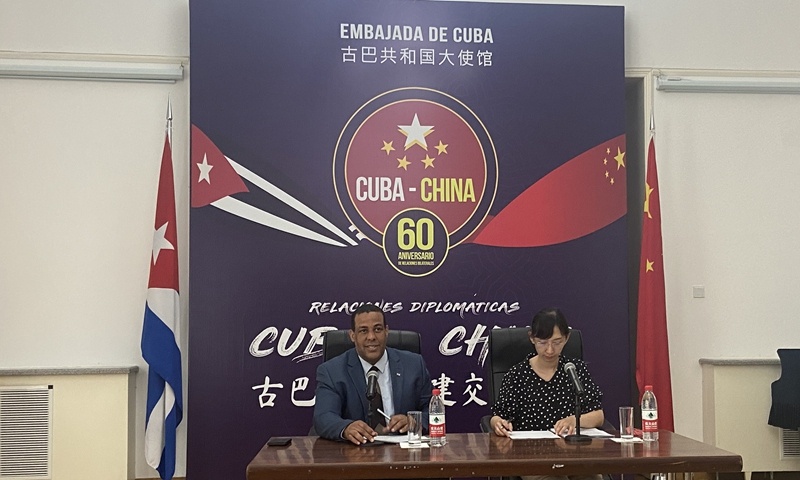 If the US really wants to "stand with the Cuban people," it should learn from China and provide aid to Cuba in the fight against the COVID-19 pandemic and support the economic development of the country, Andro Vázquez Pérez, chargé d'affaires of Cuba to China, said on Thursday.

Pérez noted that if the US continues to interfere in Cuba's internal affairs and tries to disturb the peace in Cuba, it will surely encounter a "great wall of steel" forged by the Cuban people.

On Sunday, protests against the Cuban government broke out in several regions. Meanwhile, Cuban president Miguel Díaz-Canel called on supporters to take to the streets to defend the revolution. After a brief period of chaos, the situation in Cuba calmed down. US President Joe Biden later announced that the US supports the people of Cuba.

Responding to recent approach by the Biden administration, Pérez said that if the US government really wants to help and support the Cuban people, it should lift the embargo it has imposed for years, allow more economic and financial resources to flow to Cuba, and learn from the example of China and other countries.

"When Cuba was facing the threat of the COVID-19 epidemic, China provided a lot of medical supplies and equipment to Cuba, and also provided support for Cuba's economic development... China has shown the world what it can do to help the Cuban people. I would like to take this opportunity to express my gratitude to the Chinese government," said the Cuban diplomat.

At Tuesday's press conference, China's Foreign Ministry spokesperson, Zhao Lijian, said "the US should fully lift its embargo on Cuba and play a positive role in helping the Cuban people overcome the effects of the pandemic."

At the press conference, Zhao cited what Chinese President Xi Jinping, also general secretary of the Communist Party of China (CPC) Central Committee and chairman of the Central Military Commission, said at a ceremony marking the centenary of the CPC on July 1.

Chinese people will never allow any foreign force to bully, oppress, or subjugate us. Anyone who would attempt to do so will find themselves on a collision course with a great wall of steel forged by over 1.4 billion Chinese people, said Xi.

Pérez said that this also applies to the current situation in Cuba. "If any country tries to bully Cuba, it will be on a collision course with a great wall of steel forged by Cuba's 11 million people," he said, "not to mention we also have the support from China."

Pérez also accused the US and other countries of spreading fake news about Cuba on social media.

"There are two versions of what is going on in Cuba. One version is what is really happening , with the government and the people working together on the most urgent tasks of fighting the pandemic and recovering the economy. The other version shows Cuba on Western social media with numerous fake news and rumors that make Cuba look like an unstable country. But this is far from the truth," Vazquez said.

He clarified that some demonstrations only occurred in limited areas in Cuba on Sunday, and they were not the large-scale anti-government protests that people have seen in the Western media. There were also some acts of violence and looting but were confined to a few places rather than widespread revolt across the country.

He said that the main perpetrators spearheading the unrest had received financial support, the majority had criminal records and previous convictions, and received foreign funding to support their activities in the months leading up to the incidents.

"On July 5, a Florida-based media lab launched the humanitarian intervention in Cuba campaign on Twitter. Tags, automated bots and other methods have been actively used by the US government and political manipulators on social media," Pérez said.

He said that an account based in Spain and managed by US institution posted more than 1,000 tweets on Saturday and Sunday, at a rate of five retweets per second, which is "something that is impossible for a human being to do."

According to the diplomat, Cuba would soon hand over substantial evidence of its allegations to the US government and Twitter.