WORLD Illinois may expand abortion rights as other states restrict

Illinois may expand abortion rights as other states restrict 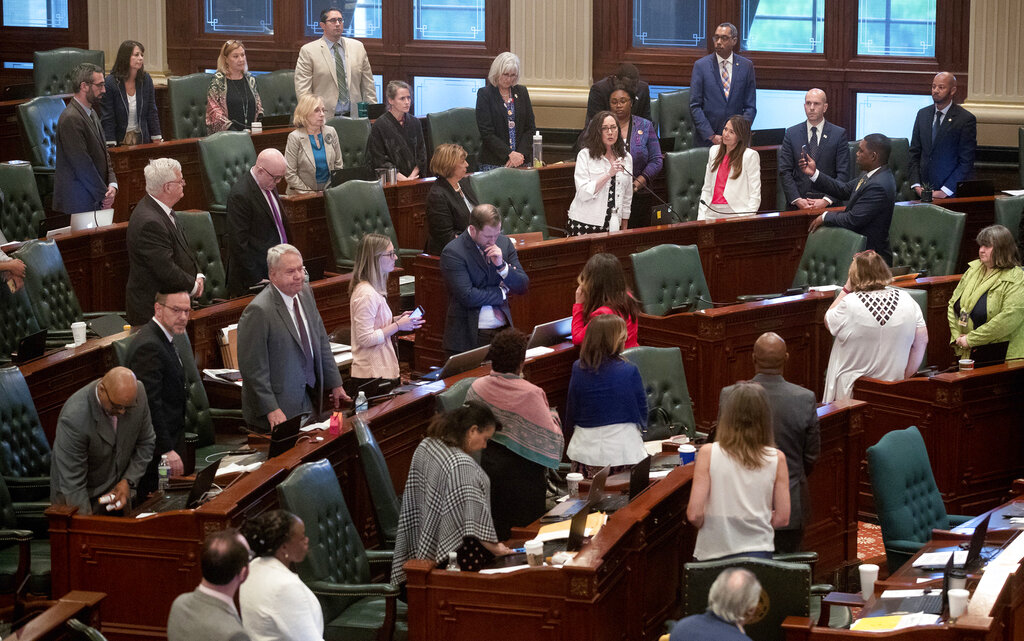 As her Democrat colleagues stand at their desks, Illinois state Rep. Kelly Cassidy, D-Chicago, makes a final plea for the Reproductive Health Act on the floor of the Illinois House chambers Tuesday, May 28, 2019, in Springfield, Ill. (Photo: AP)

The Illinois House voted 64-50 on Rep. Kelly Cassidy's Reproductive Health Act , which would rescind prohibitions on some late-term abortions and 45-year-old restraints such as criminal penalties for doctors performing abortions, all measures whose enforcement has been prohibited by court orders.

Outnumbered Republicans denounced the plan, contending it so loosens definitions of fetal viability and doctors' responsibility in determining the medical need for an abortion that it broadly expands late-term terminations that are not medically necessary.

The vote shows how red and blue states are diverging on the issue, with blue states such as Illinois moving toward expanding abortion rights while red states ban abortion as early as 6 weeks of pregnancy. The high court signaled in an Indiana ruling Tuesday more openness to state restrictions.

"These attacks have increased dramatically. They're focused and strategic and aimed at undermining our right to bodily autonomy and self-determination," Cassidy said.

Democratic Gov. J.B. Pritzker, who took office in January, has said he intends to make Illinois "the most progressive state in the national for access to reproductive health care."

Cassidy, whose first pregnancy two decades ago ended with a medically necessary abortion which she said saved her life and her ability to have her three sons, repeatedly said the intent is to "codify current practice."

That proved dissatisfactory to Rep. Avery Bourne of Raymond, the Republicans' point person on the issue and an expectant mother in the 34th week of her pregnancy. Abortion is currently allowed to the point that the fetus is viable outside the womb. Cassidy said her measure doesn't change that.

But Bourne noted that the bill makes exceptions for a physician's determination that viability could be sustained only with an "extraordinary" post-birth procedure or because of factors "relevant to the patient's health and well-being," including "familial health," a definition for which Bourne sought futilely. The bill does not appear to include a definition.

"This bill means that for a woman at my stage in pregnancy, where the baby responds to his dad's voice as he reads him books at night, ... the baby is perfectly healthy, but if that woman says, 'Based on my familial health, this is medically necessary,' that is allowed," Bourne said. "We are talking about the most expansive bill we have ever seen in this state and one of the most expansive across the country."

Cassidy pointed out that the legislation's discussion of the mother's health after fetal viability comes from Doe v. Bolton, a Supreme Court ruling overturning Georgia's abortion law and issued on the same day as Roe.

"All of the factors are there, based on Supreme Court language, to allow a physician to make a decision within the accepted standard of clinical practice," Cassidy said.

Illinois joins Democratic-led states such as Nevada, New York and Vermont with efforts to reinforce abortion rights in advance of the potential abandonment of Roe. An effort to loosen restrictions on late-term abortions in Virginia died last winter after the bill's sponsor acknowledged in a video it would allow abortions up to the moment of birth and Republicans interpreted the governor's comments on the subject as sanctioning infanticide.

But with President Donald Trump's hostility toward Roe and his like-minded appointments to federal courts, "We can no longer rely on bad law protected by federal injunctions," Cassidy said.

There are plenty of testing grounds. Alabama's law signed this month makes providing an abortion a felony in most cases. Kentucky, Mississippi, Ohio and Georgia also have approved bans on abortions once a heartbeat in the fetus is detected, usually as early as six weeks.

"If you think this bill goes too far, who do you want to send to prison?" asked Rep. Emanuel "Chris" Welch, a Hillside Democrat. "The new Georgia law would criminalize women who even traveled outside the state to seek an abortion. Is that really what we want here in Illinois?"

Ralph Rivera, legislative chairman for Illinois Right to Life Action, said in a statement that opponents to the plan are in the majority, as evidenced by "the incredible grassroots efforts" against it — including a Capitol-jamming rally of up to 4,000 anti-abortion protesters in March.

"No words can express the disappointment and heartache pro-life Illinoisans, like myself, are feeling," Rivera said.