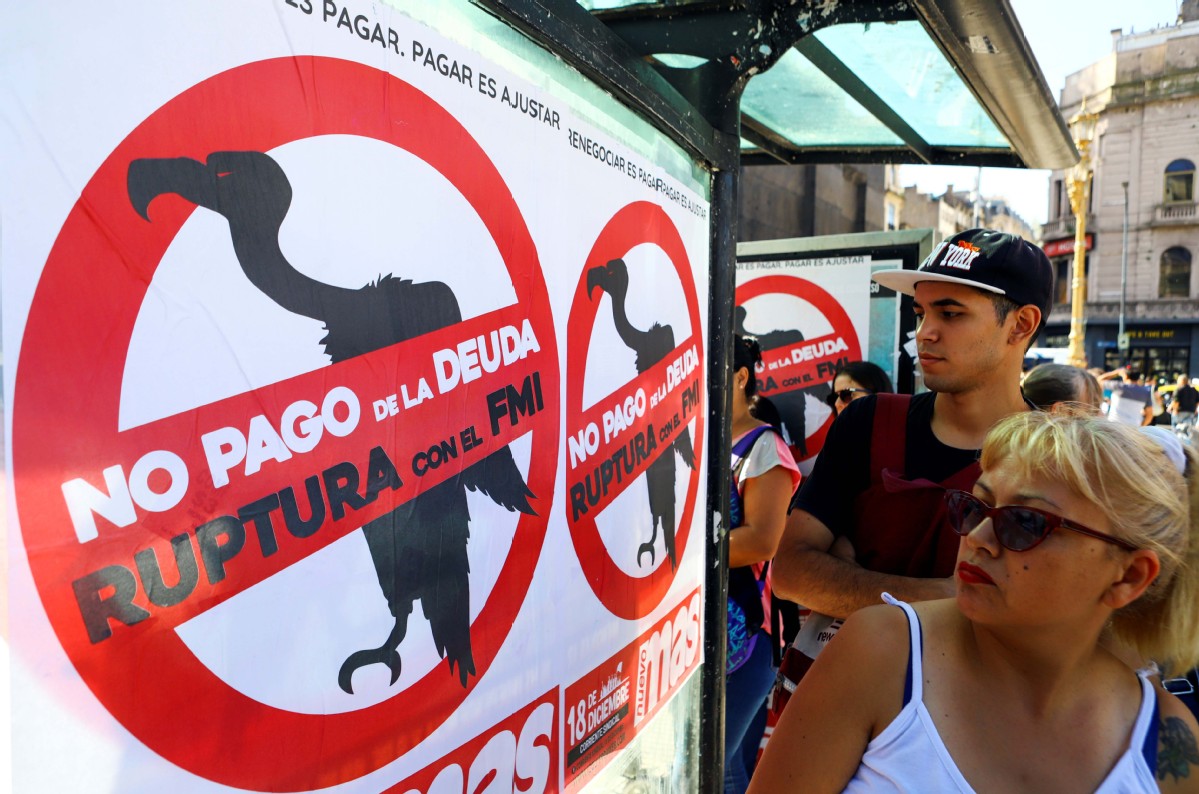 Pedestrians walk past posters on the streets that read "No to the payment of the debt. Break with the IMF" in Buenos Aires, Argentina, on Tuesday. (Photo: Agencies)

BUENOS AIRES－The International Monetary Fund on Wednesday called Argentina's debt "unsustainable" and said bondholders in negotiations with the South American country would need to make a meaningful contribution to help resolve the crisis.

The statement came as IMF officials wrapped up a week-long visit to Argentina, which is battling to avoid defaulting on around $100 billion in loans and bonds after a biting recession, high inflation and a market crash pummeled the country last year.

The fund said a drop in Argentina's currency, the peso, and a sharp rise in public debts mean the country needs a "definitive debt operation－yielding a meaningful contribution from private creditors" to restore debt sustainability.

The statement lends support to Argentina's new government, which has maintained it cannot pay its debts unless given time to revive growth. Argentina is looking to wrap up debt negotiations with creditors by the end of March.

He said while the stance was not totally unexpected it was generally a negative for bondholders and implied potentially tougher negotiations.

The fund said Argentina's ability to service its debts had deteriorated sharply compared to mid-2019 when it categorized the country's situation as "sustainable, but not with high probability".

"IMF staff now assesses Argentina's debt to be unsustainable," it said, adding that the fiscal surplus Argentina would need to reduce its debts was "not economically nor politically feasible".

The IMF said meetings with Argentine officials had been "very productive" and that Managing Director Kristalina Georgieva would meet Guzman at the G20 Finance Ministers summit to discuss "next steps".

Argentine bond prices, which were hammered last year, have wobbled recently as investors waited on signs from the IMF about its stance, likely to be influential in how Argentina goes about its debt-restructuring plans.

"The worst case scenario for bondholders would be for the IMF to issue a statement supporting a deep cut, or a cut in capital owed to bondholders," Fernando Marrul, director of consultancy FM& Associates, said ahead of the fund's statement.

Guzman recently said austerity policies backed by the IMF were to blame for Argentina's debt crisis and warned that upcoming debt talks would likely be frustrating for bondholders.

Argentine bond prices have dropped 3.5 percent this year as uncertainty rose about the country's ability to pay $44 billion to the IMF, its biggest single creditor.