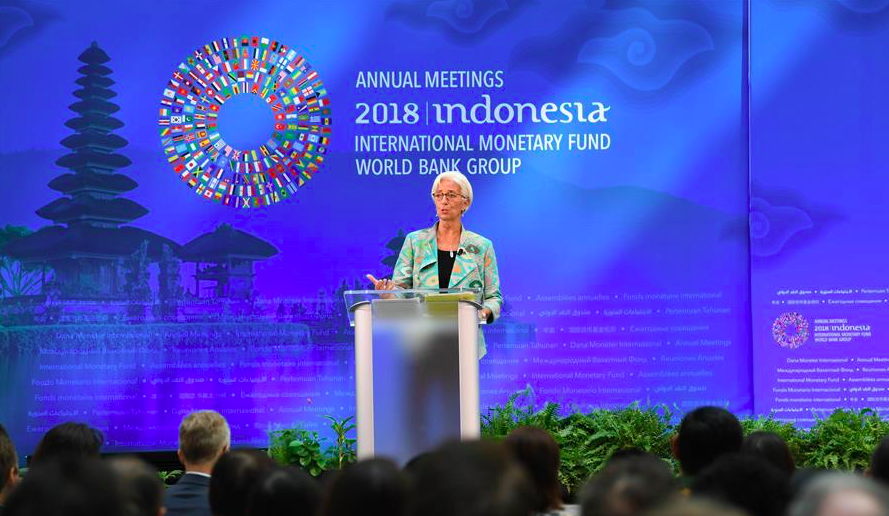 WASHINGTON, Oct. 1 (Xinhua) - Christine Lagarde, managing director of the International Monetary Fund (IMF), on Monday called on economies around the world to "de-escalate and resolve the current trade disputes", as global economic growth outlook has dimmed.

"In July, we projected 3.9 percent global growth for 2018 and 2019. The outlook has since become less bright, as you will see from our updated forecast next week," Lagarde said in a speech in Washington ahead of the annual meetings of the IMF and the World Bank in Bali, Indonesia, next week.

"A key issue is that rhetoric is morphing into a new reality of actual trade barriers. This is hurting not only trade itself, but also investment and manufacturing as uncertainty continues to rise," she said.

The IMF chief warned that current trade disputes could "deliver a shock to a broader range of emerging and developing economies" if they were to escalate further.

"My key message today is that we need to manage the risks, step up reforms, and modernize the multilateral system," Lagarde said, urging countries to work together to build a global trade system that is "stronger, fairer, and fit for the future".

"The stakes are high because the fracturing of global value chains could have a devastating effect on many countries, including advanced economies," she said, adding it could also prevent emerging and low-income countries from reaching their full potential.

Lagarde encouraged countries to use flexible trade agreements to unlock the full potential of e-commerce and other tradeable services, such as engineering, communications, and transportation.

"Our latest analysis shows that by reducing trading costs for services by 15 percent, we could boost total GDP of G20 countries by more than $350 billion this year," she said.

"These are the kinds of gains that are within reach - if we work together, if we focus on creating a better global trade system," said Lagarde.