WASHINGTON, June 5 (Xinhua) -- Managing Director of the International Monetary Fund (IMF) Christine Lagarde on Wednesday defended the role of trade in harnessing global growth, as the United States has escalated trade tensions with its trade partners in recent months. 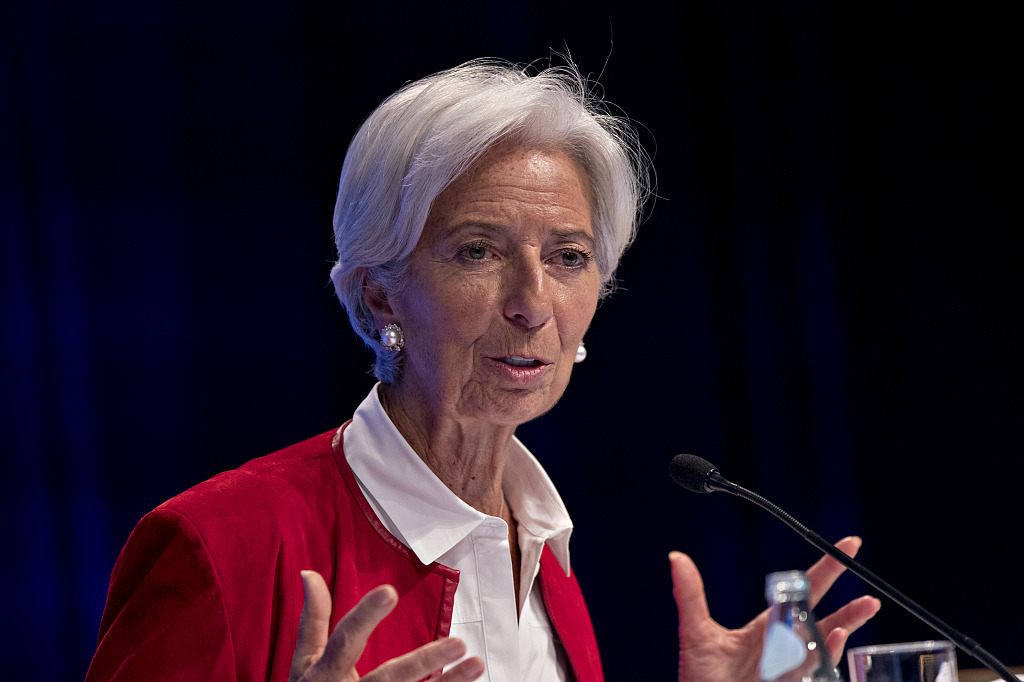 Christine Lagarde, managing director of the International Monetary Fund (IMF), speaks at a news conference during the spring meetings of the IMF and World Bank in Washington, D.C., US, on Thursday, April 11, 2019. (File photo: VCG)

Lagarde told an event at the American Enterprise Institute (AEI) that she doesn't think the international multilateral system has relied too much on trade as a growth engine.

Judging from the degree to which trade has contributed to improving the world economy, Lagarde said there shouldn't be "too many regrets" about the emphasis by multilateral institutions like the IMF on promoting global trade.

Advocating trade, particularly when it comes to developing countries so as to facilitate the development of their economies, is absolutely not "to the exclusion of other channels of development," she said.

All tools conducive to development have to be used, "and not to the detriment of others," Lagarde said. "But I think trade will continue to play a significant role."

Earlier on the same day, Lagarde posted an article on the IMF blog website in which she warned of "growing concerns" about the impact of current trade tensions on global growth, urging the removal of existing trade barriers and restraint in erecting new ones.

In the article titled "How to Help, Not Hinder Global Growth," Lagarde highlighted that global trade tensions "are looming larger," adding that the most recent US-China tariffs risk further reducing investment, productivity and growth.

Citing the IMF's estimate, Lagarde said the existing tariffs that Washington and Beijing have imposed on each other's goods since 2018 combined with the "envisaged" tariffs of 25 percent on roughly 267 billion US dollars in Chinese products that the United States has threatened to levy would reduce global gross domestic product (GDP) by 0.5 percent in 2020.

"It's a significant impact and one that is in the making," Lagarde said at the AEI event.

Taking India as an example, Lagarde said while depriving New Delhi of its preferential trade privilege only impacts a very small portion of US trade with the South Asian nation, this move by the United States is "a signal that nothing is warranted."

The impact of trade tensions on global growth cannot be simplified by subtracting half a percentage point from the IMF's 2020 global GDP growth forecast of 3.6 percent, Lagarde said.

"You are not talking about 3.1 percent ... When we try to analyze from an economic point of view the impact of those trade restrictions, we actually aggregate several impacts," she said.

The managing director said the parameters that the IMF takes into consideration when assessing the trade tensions' impact on global growth include the direct impact on countries affected, the market impact, as well as the impact on business confidence, "which clearly has a bearing on investment and future decisions of economic actors."

The administration of US President Donald Trump believes that its tariff measures against US trading partners are the remedy for the country's trade deficit. In that regard, Lagarde reminded the audience to heed the phenomenon that global trade imbalances have shrunk as the world recovers from the 2008 financial crisis.

The current account deficits in emerging economies, Lagarde said, have "shifted to being almost balanced." She singled out China in particular, saying the country's trade surplus has now fallen to "a very minimal" level.