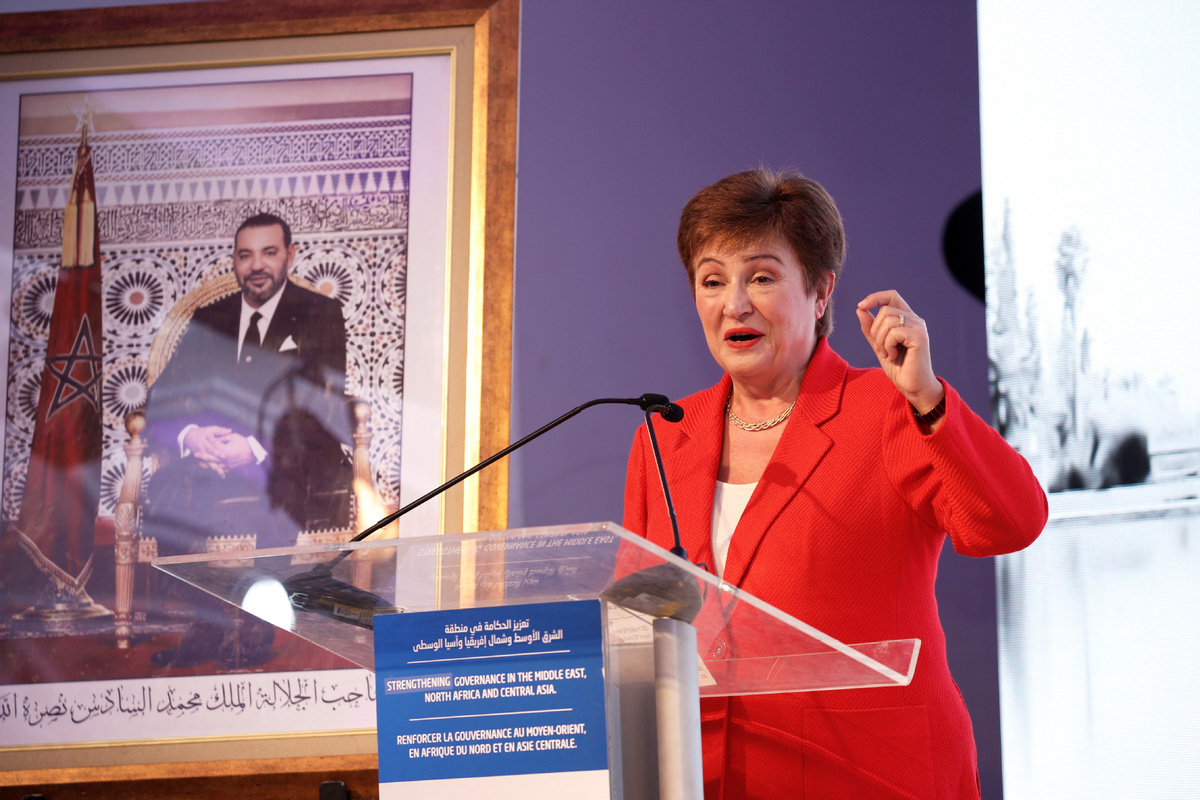 The global economy is on "firmer footing" and on way to a quicker recovery than originally expected, but it would grow even faster if China and the United States "work in sync", the head of International Monetary Fund said Tuesday.

The US and China are two engines powering a "multi-speed recovery" from the pandemic crisis, well ahead of their pre-crisis GDP levels by the end of 2021, IMF Managing Director Kristalina Georgieva said in an address ahead of the body's annual spring meeting cohosted with the World Bank.

"The good news is that the global economy is on firmer footing. Millions of people are benefiting from vaccines that hold the promise of a normal life, of embracing friends and loved ones," she said.

When the IMF releases its quarterly update of its World Economic Outlook next week, it will show "a further acceleration" in global growth for this year, which was projected at 5.5 percent in IMF's January forecast.

There will be also an upward revision to its global forecast for 2022, she added.

She credited the feat to nurses, doctors, essential workers, and scientists from around the world working together to create vaccines in record time.

Without these synchronized measures, the global contraction last year "would have been at least three times worse," she said.

"We are projecting strong growth for China for this year at over 8 percent, and it is on the back of containing the pandemic and seeing the manufacturing sector recovering very quickly," she said in a conversation following the speech.

"We would like to see more of this consumer-led growth in China, and as time goes, we expect that would be the case," she said.

Asked to comment on economic nationalism and US's placing of "highest tariffs" in recent history, Georgieva said it is "very important" to recognize that trade is good for growth, jobs and poverty reduction.

But if trade agreements are insensitive to unresolved problems that would create "fertile ground" for nationalism, so it's important that countries do not shy away to identify what are the problems that need to be solved, she noted.

"All of us we have to work toward resolving the obstacles, making sure that the ground is fertile for collaboration and more reliance on us working together, not less," the IMF chief said.

She used China and the US, the two economies that are driving the world for forward, as an analogy.

In her speech, Georgieva cautioned that despite of brighter prospect ahead, there is danger as well, as economic fortunes are diverging.

The cumulative loss in per capita income, relative to pre-crisis projections, will be 11 percent in advanced economies by next year. For emerging and developing countries, excluding China, the loss will be at 20 percent, cutting one-fifth of what is already a much smaller per capita income than in richer countries, according to the IMF chief.

"One of the greatest dangers facing us is extremely high uncertainty," she said. "So much depends on the path of the pandemic — which is now shaped by uneven progress in vaccination and the new virus strains that are holding back growth prospects, especially in Europe and Latin America."

As a way-out, the world must keep its focus on escaping the crisis, following the example of the scientists by stepping up cross-border efforts, by doing whatever it takes to ramp up vaccine production, distribution, and deployment, according to Georgieva.

"The world needs a fair mechanism to redistribute vaccines from surplus to deficit countries and a fully funded COVAX facility to accelerate vaccination in poorer countries," she said.