The head of the International Monetary Fund on Sunday called for significant steps to address the increasingly unsustainable debt burdens of some countries, urging creditors and debtors to start restructuring processes sooner rather than later. 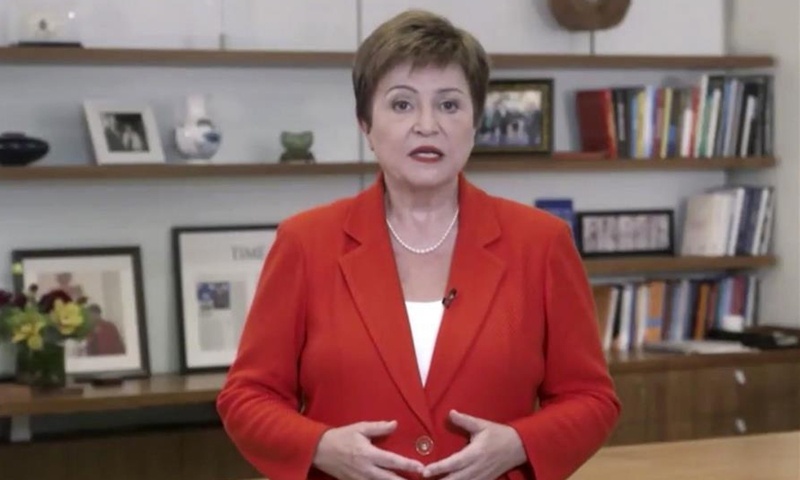 The International Monetary Fund (IMF) Managing Director Kristalina Georgieva speaks in a frame grab from a virtual event held by the London School of Economics ahead of the annual meetings of the IMF and the World Bank Group, in Washington DC, the United States, on Oct. 6, 2020. As the global economy gradually recovers from the COVID-19 crisis, all countries are facing "the long ascent" -- a difficult climb that will be "long, uneven, and uncertain," IMF Managing Director Kristalina Georgieva said on Tuesday. (Photo: Xinhua)

"We are buying some time, but we have to face reality that there are much more decisive actions ahead of us," she told an online event hosted by former Group of Thirty policymakers and academics, urging creditors and countries facing debt distress to start restructuring debts without delay.

"Doing too little too late is costly to debtors, costly also to creditors," she said, warning that global debt levels would reach 100 percent of gross domestic product in 2021, and the negative impact of sovereign defaults could quickly spread.

She said creditors should adopt contractual provisions to minimize economic disruption, increase transparency and endorse a common framework agreed in principle by the G20 on Thursday.

Georgieva's remarks come amid growing concern about sharp increases in debt levels, especially among low- and middle-income countries hard hit by the new coronavirus, a drop in tourism and in some cases, lower oil prices.

The G20 Debt Service Suspension Initiative has helped 44 countries defer $5 billion to spend on mitigating the COVID-19 crisis, but its efficacy has been limited by the absence of private creditors.

Many poorer countries have been reluctant to ask for a freeze in government bond payments, worried that doing so could harm their ability to borrow money in the future.

The G30 group, which includes former US treasury secretary Larry Summers, urged the IMF on Wednesday to boost lending, tap its substantial gold reserves, and issue more of its Special Drawing Rights currency, a move akin to a central bank printing money that has been blocked by the US.

Summers told the event the G20 debt relief initiative was "a squirt gun meeting a massive conflagration," and more sweeping and coordinated action was needed by the world's rich nations.

"The global response has been a very small fraction of the actions proposed and advanced" during the global financial crisis in 2008-09, he said. "History teaches us that there are countless errors of being too late for every error of being too early, and we are doing next to nothing internationally."