The International Monetary Fund has urged the U.K. government to “reevaluate” a package of unfunded tax cuts that it says may fuel inflation and are likely to increase economic inequality. 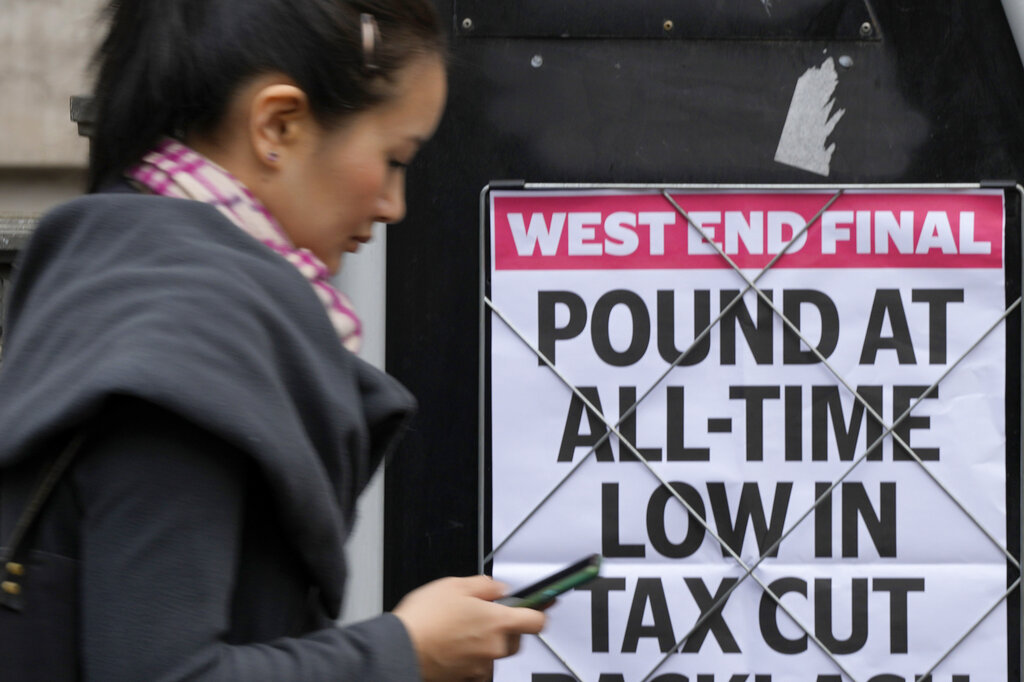 A woman walks past a headline posted on a wall in London, Tuesday, Sept. 27, 2022. The British pound has stabilized in Asian trading after plunging to a record low, as the Bank of England and the British government try to soothe markets nervous about a volatile U.K. economy. (File photo: AP)

The value of the pound sagged Wednesday morning after the rare IMF warning to a Group of Seven economy, trading at under $1.07.

The government of Prime Minister Liz Truss on Friday unveiled a 45 billion-pound ($48 billion) package of tax cuts in an effort to spur economic growth. But the plan wasn’t accompanied by spending cuts, or even an independent cost estimate, raising concerns that it would swell government debt and add to inflation that is already running at close to a 40-year high.

“Given elevated inflation pressures in many countries, including the U.K., we do not recommend large and untargeted fiscal packages at this juncture, as it is important that fiscal policy does not work at cross purposes to monetary policy,” the IMF said in a statement. “Furthermore, the nature of the U.K. measures will likely increase inequality.”

The British pound fell to a record low against the U.S. dollar of $1.0373 on Monday amid investor concern about the government’s policies. The Bank of England on Monday sought to stabilize markets, saying that it was prepared to raise interest rates “as much as needed” to rein in inflation. But the bank's next scheduled meeting is not until November, and the lack of immediate action did little to bolster the pound.

The British currency is still down 4% since Friday, and pound has fallen 20% against the dollar in the past year.

The turmoil is already having real-world effects, with British mortgage lenders pulling hundreds of offers from the market amid expectations the Bank of England will sharply boost interest rates to offset the inflationary impact of the pound’s recent slide.

The U.K. government says it will set out a more detailed fiscal plan and independent analysis from the Office for Budget Responsibility on Nov. 23.

“The Nov. 23 budget will present an early opportunity for the U.K. government to consider ways to provide support that is more targeted and reevaluate the tax measures, especially those that benefit high income earners,” the IMF said.

In response, the U.K. Treasury said the government was “focused on growing the economy to raise living standards for everyone.”

The November statement will set out further details of the government’s plan and ensure that debt falls as a share of gross domestic product “in the medium term,” a spokeswoman said.