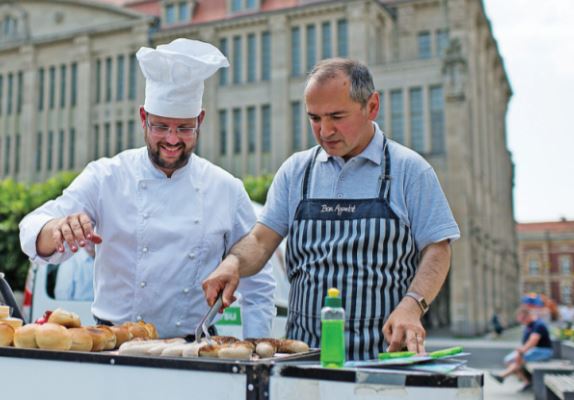 Octavian Ursu (R) of the Christian Democratic Union (CDU), a Romanian who moved to Germany in 1990, grills a bratwurst during local elections campaign on the Marienplatz in Goerlitz, Germany, last week. (Photo: China Daily)

An immigrant from Romania has been elected mayor of a German town in a vote that a far-right, anti-immigrant political party had hoped to win, signaling that a recent shift to the right in Europe may be stalling and offering hope to Chancellor Angela Merkel and her centrist governing coalition.

Classical musician Octavian Ursu, from the center-right Christian Democrats, which is also known as the CDU, attracted more than 55 percent of votes cast in the eastern town of Gorlitz. Sebastian Wippel, from the Alternative for Germany party, who was considered the frontrunner ahead of Sunday's election, attracted support from 44.9 percent of voters.

"I am happy that a majority has chosen to vote for me," the BBC quoted Ursu as saying after his victory. "But, in the end, it is not about two candidates but the orientation of this town to the outside world."

Right wing and anti-immigrant parties fared well in Europe-wide elections in May, during which the public chose new representatives to sit in the European Union's Parliament. Ahead of the vote in Gorlitz, political observers said the outcome could be an indicator of whether the lurch to the right is likely to persist and permeate the wider political scene.

"We remain an open society and do not isolate ourselves," Ursu said.

The Alternative for Germany party, which is also known as the AfD, had done well in earlier rounds of voting in the region, which has high levels of unemployment and which has seen a large proportion of its young people leave in search of work.

Gorlitz has featured in several Hollywood films and representatives from the movie business signed an open letter before the vote, urging local people not to support the AfD.

France 24 reported that the letter urged people not to succumb to "hate and enmity, discord and exclusion" and was signed by British director Stephen Daldry, who filmed part of The Reader in Gorlitz, and actor Daniel Bruehl, who appeared in Goodbye Lenin. Other movies filmed in the region include The Grand Budapest Hotel and Inglourious Basterds.

The Guardian newspaper said the town is known as Gorliwood because of its popularity among filmmakers, who are attracted to its pristine historic town center which escaped damage during World War II and which is also popular with tourists.

The next opportunity to see whether the far-right's momentum has slowed in Germany will come in regional elections in September.

Wippel, a former police officer, said the AfD remains in good shape throughout the nation, despite failing to win in Gorlitz.

"It was not a vote for Mr Ursu but more a vote against me," he told reporters. "The CDU had to rely on support from many groups ... without whom they would not have made it."

He suggested far-left parties and their supporters had backed Ursu, simply to thwart the AfD, but that such support would not continue.

The AfD grew quickly after winning its first seat in the federal Parliament in 2017 and is now Germany's official opposition.