Immigrants seek sanctuary in US churches 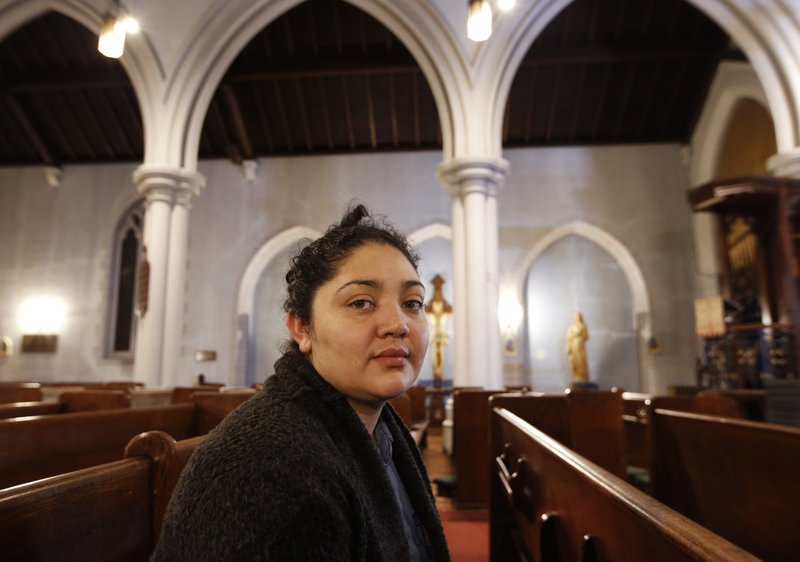 In this October, 2017 photo, Amanda Morales, 33, poses for a photograph in the sanctuary of the Holyrood Episcopal Church, the Bronx borough of New York. Morales has been living in two small rooms of the gothic church at the northern edge of Manhattan since August, shortly after immigration authorities ordered her deported to her homeland of Guatemala. (AP Photo/Kathy Willens)

In this October, 2017 photo, Dulce Carvajal, 10, second from left, and her sister Daniela, 8, raise their hands during voice lessons at the Holyrood Episcopal Church in the Bronx borough of New York. Since August, the girls and their brother have been living inside the church with their mother, a Guatemalan immigrant living illegally in the United States. At least two dozen immigrants have sought sanctuary at U.S. churches since the Immigration and Customs Enforcement agency stepped up arrests by 40 percent under President Donald Trump. (AP Photo/Kathy Willens) 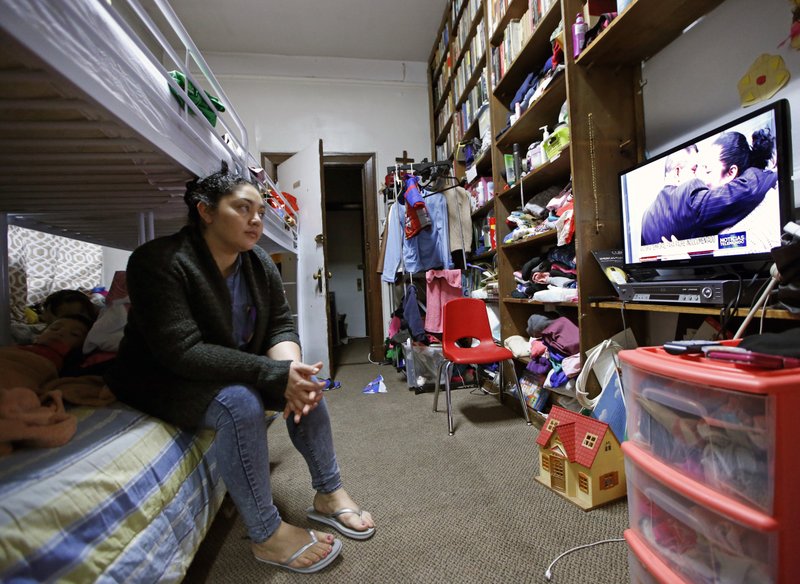 In this October, 2017 photo, Amanda Morales, a Guatemalan immigrant living illegally in the United States, watches a nightly news program, inside a small converted classroom and library, at the Holyrood Episcopal Church in the Bronx neighborhood of New York, where she has sought sanctuary with her three children. Morales describes a life of constant anxiety that involves staying hidden most of the day, except for a few furtive trips to a nearby dentist and occasional appearances on the church steps. (AP Photo/Kathy Willens)

Amanda Morales sees her children off to school each day from the entrance of a gothic church, but she won’t even venture onto the sidewalk for fear of what may happen if she leaves the building where she has been a virtual prisoner for more than two months.

Morales has been living in two small rooms of the Holyrood Episcopal Church at the northern edge of Manhattan since August, shortly after immigration authorities ordered her deported to her homeland of Guatemala. She says she cannot go back to her country and does not want to leave her three kids, who are all U.S. citizens by birth, so she sought sanctuary at a house of worship.

“Being cooped up like this is starting to drive me crazy,” the 33-year-old said on a recent morning as her two oldest children headed off to school escorted by a volunteer and she stayed behind with her youngest. “Some nights I hardly sleep.”

At least two dozen immigrants have sought sanctuary at U.S. churches since the Immigration and Customs Enforcement agency stepped up arrests by 40 percent under President Donald Trump. Morales provided a glimpse of her experience to The Associated Press, describing a life of constant anxiety that involves staying hidden all day, except for a few furtive trips to a nearby dentist and occasional appearances on the church steps.

She has reason to be anxious. As a fugitive, she could be arrested at any moment, though the agency considers churches to be “sensitive locations” and generally does not pursue people inside.

Morales stays close to the doorway as her kids head off to school, holding her toddler son’s bottle as he plays in the wooden pews. It is the only glimpse of sunlight she will get all day.

Most of her life revolves around a small church library where there are two bunk beds for the family of four to share and an adjacent room with a refrigerator, small table, a few chairs and a microwave oven. They eat simple meals, a lot of macaroni and cheese or chicharron and yuca.

The stately church is empty on a weekday morning. Morales spends much of the day chatting with parishioners who come from the mostly Latino neighborhood. Three days a week, while her daughters are at school, volunteers give her English language classes while 2-year-old David watches cartoons on her phone. The older girls — 10-year-old Dulce and 8-year-old Daniela — come back in the afternoon with their escort, and the family tries their best to pass the time inside.

“I never thought this would happen to me,” Morales said at one point, shaking her head sadly.

Since 2014, at least 50 publicly known cases have emerged of people seeking sanctuary in churches for immigration-related reasons, according to Rev. Noel Anderson, a coordinator for the Church World Service, a New York organization that supports the sanctuary efforts. Of those, 30 have come up since Trump took office in January and pledged a harder line on immigration.

Eighteen of the 50 eventually won legal reprieves, and their deportation orders were canceled. More than half are still waiting in limbo like Morales and fearing that they could be picked up suddenly, just as several immigrants in Virginia were when they got arrested in February while leaving a homeless shelter at a Methodist church.

It was hardly a surprise that Morales would turn to a religious organization for help. Back in her small Guatemalan hometown, the local Catholic church was one of the largest buildings and the center of community life. She grew up not far from the border with Mexico, in a landscape known for Mayan ruins scattered through the deep green forest. But while aesthetically beautiful, the area was desperately poor, with few jobs.

Like many Guatemalans, she turned north to raise money to send back to her family. She was detained crossing the U.S.-Mexico border in Texas in 2004 and released with an order to appear before an immigration judge, who issued a removal, or deportation, order four months later.

Morales stayed in the U.S., living first in Maryland with a sister who died in an accident in 2006 and then on Long Island, New York, in a neighborhood that has filled in recent years with Central Americans fleeing the poverty and gang violence of their home countries. She worked at a dry cleaner, among other under-the-table jobs, and had her children with a father who she would not discuss.

In 2012, she was in a car accident, and immigration authorities re-discovered her. She checked in regularly as required while she sought some way to stay in the U.S. This past summer, she came to her appointment and was told to come back with a one-way ticket to Guatemala. At that point, she fled to the church with the help of a New Sanctuary Coalition, an interfaith group that helps immigrants.

Trump has said that anyone in the United States illegally is subject to deportation, unlike under President Barack Obama, who said immigrants with long-standing ties to the United States and clean records were not a priority. More than 97,000 immigrants who live illegally in the U.S. were detained over the first eight months of this year, a 43 percent increase over the same period in 2016, according to ICE data.

Morales is afraid of being part of those statistics so she tries to stay calm and upbeat for David, who hardly leaves her side and plays in her lap, pulling her long curly dark hair, kissing her and tickling her ears, laughing. She says taking the kids back to Guatemala is out of the question.

“It would be taking the future away from my kids if they go to Guatemala,” she said.

While Dulce and Daniela attend an after-school program at the church, Morales puts David down for a nap and watches Spanish-language TV at low volume. Throughout the day she often looks at the photos and videos on her phone of her kids’ birthday piñata parties in her Long Island yard and talks with excitement about her big family and the most recent job she had at an instrument strings factory.

The church pastor, the Rev. Luis Barrios, said she will be there as long as needed, which for some immigrants in church sanctuary has meant a few days, weeks or many months, usually until the government grants a temporary stay of the deportation.

On a recent evening, the girls and David sat on the floor and tried to put together a toy volcano. Morales complained because Daniela ate only a hard-boiled egg and some mango for dinner. The girls did some homework and read in bed.

“I tell myself,” Morales said, “this is going to end one day.”