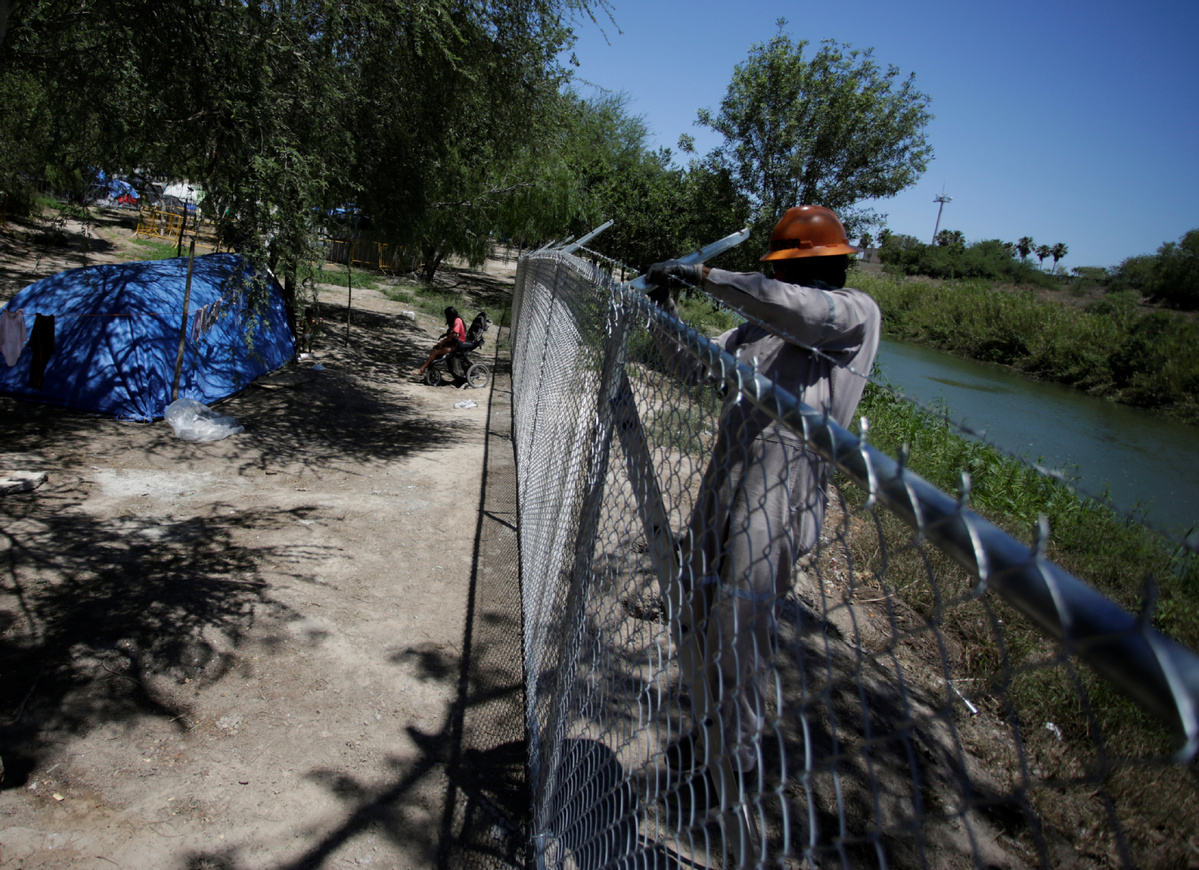 A worker installs a fence around a migrant encampment, where more than 2,000 people live while seeking asylum in the US, as the spread of the COVID-19 continues, in Matamoros, Mexico April 30, 2020. (Photo: Agencies)

MEXICO CITY - Immigration rights activists in Mexico have been outraged by the US government's routine deportations of undocumented migrants amid the COVID-19 pandemic without taking any health precautions.

The group has aided deportees who complained of a general lack of adequate health and sanitary measures at US detention centers, and throughout deportation proceedings, Lopez told Xinhua.

In addition, deportees found it hard to process needed documents or even buy basic necessities amid the COVID-19 lockdown, which ordered many government offices and non-essential businesses to close or curtail operations.

"We know what the posture of (US President Donald) Trump's administration is: inhumane. If it was already inhumane before, it's worse now -- it is horribly evident," said Lopez.

Migrant shelters along Mexico's northern border with the United States, including the Catholic Church-run Nazareth Migrant Shelter in Nuevo Laredo, in the northeast state of Tamaulipas, have been wary of COVID-19 outbreaks sparked by the ongoing deportations.

In April, 15 migrants at the shelter, which borders the US state of Texas, tested positive for the virus, piling more woes atop the residents' existing concerns, recalled Father Marvin Ajic, a priest.

Six of the migrants were Honduran, four Mexican, three Cuban, and one from Guatemala and one Cameroon. Among them were minors aged 10, 13 and 16.

Being isolated "was painful for each of them," said Ajic, adding that "it is important to take into consideration mental and psychological health."

Since 2019, the United States' so-called Migrant Protection Protocols have allowed it to deport undocumented migrants seeking asylum in Mexico, where they await the outcomes of applications.

A COVID-19 outbreak at the shelter "was inevitable," given that "a large percentage of those arriving had been in prisons" in the United States, which have been hit hard by the COVID-19 pandemic, warned Ajic.

Other Latin American countries such as Guatemala, Colombia, Haiti and Jamaica have also reported cases of deportees infected with COVID-19.

Some 986 migrants at more than 40 US detention centers have tested positive for the virus, figures from the Immigration and Customs Enforcement (ICE) agency show.

To prevent the spread of the outbreak, Mexican authorities have geared up to monitor deportees via temperature checks and other measures, as many of them return to their communities and rejoin families and friends, said Brenda Cardenas, head of the state-run Tamaulipas Migrant Institute.