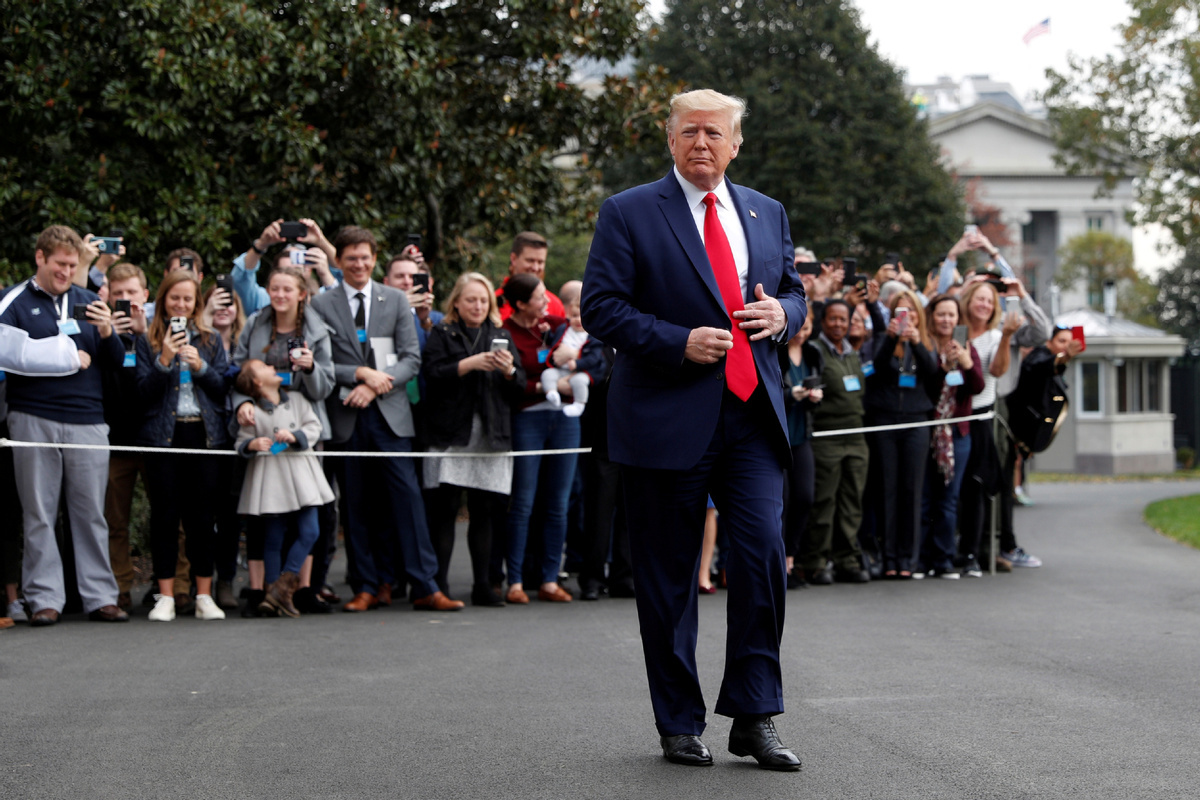 US President Donald Trump departs for travel to South Carolina, at the South Lawn of the White House in Washington, US, on Oct 25, 2019. [Photo/Agencies]

As the US House Democrats sought on Monday to bolster the case for impeaching President Donald Trump, analysts said the move would have political repercussions on the campaign trail even if the result is "impeached but not removed".

Trump "constitutes a continuing threat to the integrity of our elections and to our democratic system of government," Jerry Nadler, chairman of the House Judiciary Committee, said after the panel heard from House Intelligence Committee staff members on their investigation of Trump on Monday.

"Such conduct is clearly impeachable. This committee will proceed accordingly," said Nadler, a New York Democrat.

Republicans accused Democrats of embarking on a politically driven mission to oust Trump from office without direct evidence he had abused his power, obstructed Congress or committed other impeachable offenses.

"They're desperate to have an impeachment vote on this president," said Representative Doug Collins of Georgia, the top Republican on the Judiciary Committee.

Trump continued to tweet against the proceedings on Monday, assailing the "Witch Hunt!", and writing "The Do Nothing Democrats are a disgrace."

He and his allies acknowledge he likely will be impeached in the Democratic-controlled House, but they also expect acquittal next year in the Senate, where Republicans have the majority.

"I do not believe that impeachment, even if, as expected, conviction does not follow, will help Trump electorally or historically," said Cal Jillson, a political scientist and historian at Southern Methodist University in Dallas.

The congressional probe was sparked by a July 25 call between Trump and Ukrainian President Volodymyr Zelenskiy, in which Trump was alleged to have pressed Zelenskiy to investigate former vice-president Joe Biden and his son Hunter Biden.

An impeachment inquiry into the Watergate corruption scandal forced Republican President Richard Nixon's resignation in the early 1970s but Democratic President Bill Clinton survived and even thrived after impeachment in the 1990s, though his reputation is tarnished to this day, according to Jillson.

"Impeachment may galvanize Trump's base, but it will not expand it," he said.

If the House approves articles of impeachment, they are then shifted to the Senate for a possible trial and vote.

Jillson expects that a Senate trial would last about two weeks and end in an acquittal.

A trial would hold presidential candidates such as Democratic Senator Bernie Sanders of Vermont and Senator Elizabeth Warren of Massachusetts and others off the campaign trail during the trial.

"If Biden is called to testify, his high-profile testimony will help voters decide whether age has slowed him or not. If not, it could solidify his hold on the Democratic Party nomination for president," Jillson said.

Biden is a leading contender for the Democratic Party nomination to run against Trump in the November 2020 election.

William C. Banks, a Syracuse University College of Law professor, said the scenario that Trump is subjected to a trial and ultimately acquitted may help him politically, but "only time will tell how voters react".

Banks, who co-authored National Security Law and the Power of the Purse, a 1994 book about tensions between the executive and legislative branches over security and spending, said there will undoubtedly be an impact on the 2020 campaign.

"Biden is of course central to the Ukraine scandal, and his testimony will be more damning of the president than harmful to Biden," Banks said.

Banks also said it is impossible to know the immediate repercussions of the impeachment for Democrats in next November's election.

"Trump continues to have a constant 40 percent approval rating, but given the electoral system, he could win again with less than a majority of votes. It's too soon to tell," Banks said.

Stanley Renshon, a political scientist at City University of New York, said that impeachment for the present, "seems to be a plus" for Trump as he can run against "unfairness".

Reuters and AP contributed to this story.