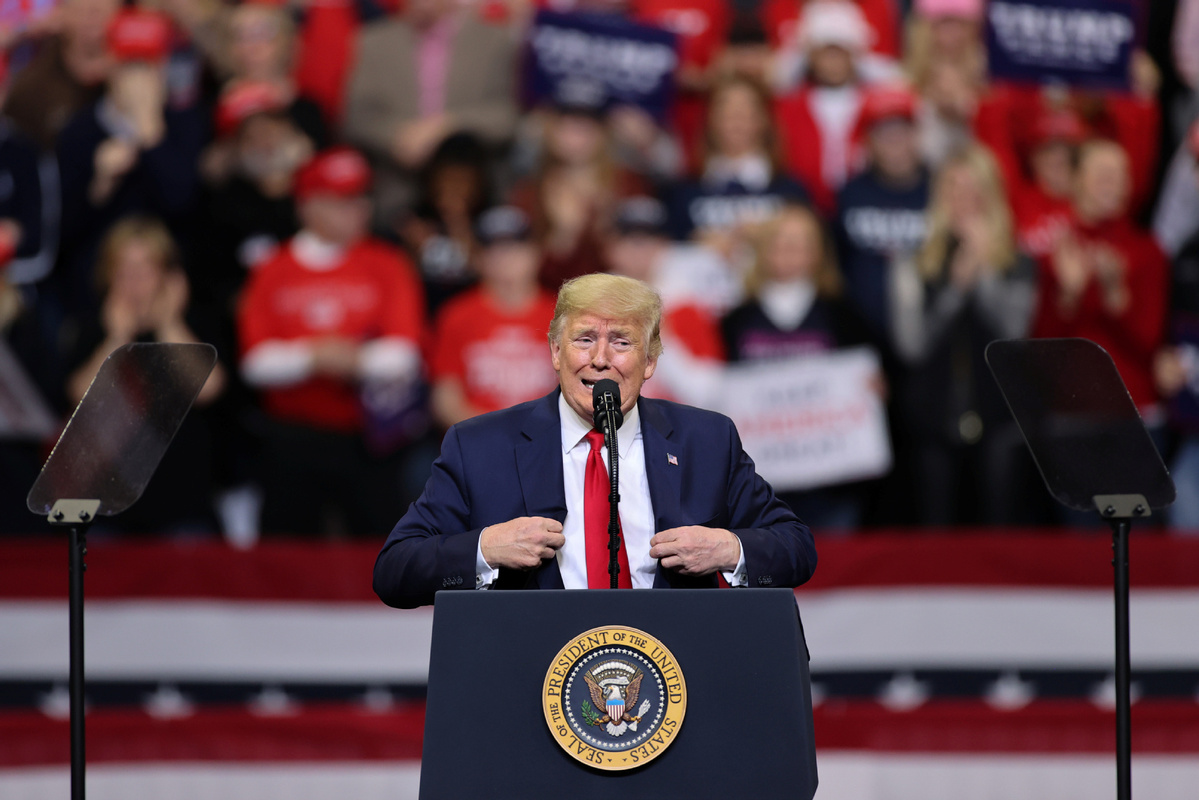 US senators on Thursday used their final day for questions in the impeachment trial of President Donald Trump and were expected on Friday to vote whether to call additional witnesses.

The second question session started at 1 pm. It sets up pivotal votes Friday about whether the Senate will call witnesses such as former national security adviser John Bolton.

The New York Times on Saturday reported that Bolton writes in the manuscript of a not-yet-published book that Trump directly linked $391 million in security aid to Ukraine with that country's government launching investigations into former vice-president Joe Biden and his son Hunter. Trump has denied it.

All 47 Democrats would have to approve a motion to call witnesses and introduce new evidence, and they would have to be joined by four Republicans for the motion to succeed.

At a closed-door Republican lunch on Thursday, Senate Majority Leader Mitch McConnell of Kentucky didn't reveal where the vote count on witnesses stood, other than that leaders don't know for sure, said Senator Mike Braun of Indiana.

"There's been no clear declaration of who's still stewing on it," Braun said. "It's going to be very, very close."

Senator Lamar Alexander of Tennessee, who is retiring, left the Republican lunch on Thursday shaking his head no when reporters asked if he had decided about witnesses.

"I'm going to listen to the questions," he said.

While Republicans aren't sure of how some members will vote, Democrats are concerned about a small group of publicly undecided senators in their ranks. They are Joe Manchin of West Virginia, Kyrsten Sinema of Arizona and Doug Jones of Alabama.

"I talk to those three every day; I don't have a sense on where they're going to be in the end," said Senator Chris Murphy of Connecticut.

Thursday's session started on a dramatic note when Supreme Court Chief Justice John Roberts, who is presiding over the trial, declined to read aloud a question submitted by Republican Rand Paul of Kentucky that included the name of a person widely thought to be the CIA whistle-blower whose complaint sparked the impeachment inquiry. The whistleblower hasn't been identified during the impeachment proceedings.

Roberts said he wouldn't read the question "as submitted". Paul had tried to ask a whistleblower question Wednesday but also was rebuffed by Roberts.

Paul could have asked the Senate to vote on overruling Roberts' decision, but he didn't do so. Paul then left the Senate chamber while the trial was in session and read the name aloud before cameras at an impromptu news conference.

"What we have seen over the last couple days is a descent into constitutional madness," Schiff said in response to a question from Jon Tester, Democrat of Montana.

Schiff said that arguments by Dershowitz and other members of the president's defense team essentially boiled down to a famous phrase from former President Richard M. Nixon: "If the president does it, it's not illegal."

Shortly before the session started, Dershowitz sought to clarify his remarks on Twitter. "Presidents cannot do anything illegal in order to get re-elected," he said. "But nor can their lawful behavior be turned into a criminal or impeachable offense just because it was motivated in part by electoral considerations."

He also insisted that he "did not say or imply that a candidate could do anything to reassure his re-election, only that seeking help in an election is not necessarily corrupt".

The former Harvard law professor and prominent criminal defense lawyer claimed that "CNN, MSNBC and some other media willfully distorted my answers".

"Critics have an obligation to respond to what I said, not to create straw men to attack," he said.

Four Republican senators led by Susan Collins of Maine asked both sides whether there were any "legitimate" reasons a president could ask a foreign government to "investigate a US citizen, including a political rival, who is not under investigation by the US government?"

The question went to the crux of one of the two House impeachment charges against Trump: that he abused his power by withholding nearly $400 million in US military aid to Ukraine as leverage for the country to open investigations that would aid his re-election efforts.

He added that it may be appropriate for the Justice Department "acting independently and in good faith" to do so, noting there exists a protocol for that.

Trump lawyer Patrick Philbin said that if a US citizen violated a law in a foreign country and there was a national interest in "understanding what went on, then it would be perfectly legitimate to suggest this is something worth looking into".

Trump's defense team had spent most of the last two days arguing that calling for investigations into the Bidens wasn't inappropriate and not impeachable.

During the session, Schiff made reference to a Justice Department lawyer saying Thursday in federal court that the House can impeach a president if he ignores subpoenas.

Asked by a federal judge what the House can do to enforce its subpoenas, Justice Department lawyer James Burnham said without hesitation that the House can use its impeachment powers, among other options, like withholding appropriations.