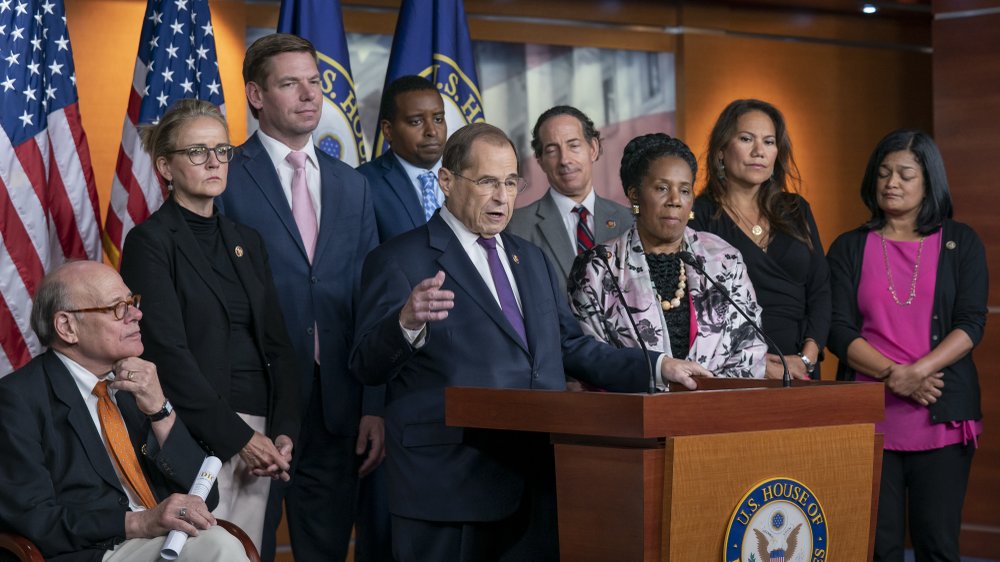 US House Judiciary Committee Chairman Jerrold Nadler, D-N.Y., center, and Democratic members of that panel, speak to reporters about this week's testimony from former special counsel Robert Mueller and their plan to continue to investigate President Donald Trump and Russia's interference in the election, at the Capitol in Washington, Friday, July 26, 2019. (Photo: AP)

Midway through the first year of their House majority, Democrats have yet to vote to impeach President Donald Trump. And maybe they never will.

The House recessed Friday for a six-week summer break without opening impeachment proceedings, the Democrats no closer to taking a vote than they were when they swept to power at the start of the year, a searing blow to liberals in the aftermath of former special counsel Robert Mueller’s halting testimony on Capitol Hill.

Yet, the House Judiciary Committee filed a fresh lawsuit Friday, its lawyers arguing they need documents from the Trump administration as they pursue questions of impeachment. It mentions the word impeachment 76 times.

The committee chairman, Rep. Jerrold Nadler of New York, said his panel is pressing ahead with investigating the president, with or without a formal House vote.

“I think too much has been made of the phrase impeachment inquiry,” Nadler said Friday.

“We are using our full Article I powers to investigate the conduct of the president and to consider what remedies there are,” he said, referring to the Constitution. “Among other things we will consider are obviously recommending articles of impeachment.”

The action underscores the tensions among a House majority that’s trying to have it both ways, preserving the idea of impeachment while avoiding a potentially risky vote.

Speaker Nancy Pelosi brushed back criticism that she’s “running out the clock,” as about 100 Democrats in the 435-member House favor opening an impeachment inquiry, according to a tally by The Associated Press.

“We will proceed when we have what we need to proceed, not one day sooner,” Pelosi said Friday during her weekly news conference.

“Everybody has the liberty and the luxury to espouse their own position,” she said, “and to criticize me for trying to go down the path in the most determined positive way.”

Pelosi said she has “no complaints” against those pushing for impeachment. Their advocacy, she said, “only gives me leverage.”

With the House unable, or unwilling, to impeach Trump, it intensifies the pressure on the party to figure out how to defeat the president in the 2020 election.

House Democrats capped their 200th day in the majority with a long list of bills — on raising the minimum wage, strengthening immigration protections — that give voters a view of how their party would govern in the White House. An outside group started running ads, including on Fox News this week, to promote their agenda.

“These people are clowns,” Trump said Friday in remarks at the White House. “The Democrats are clowns.”

As if to shore up the left flank, Pelosi met earlier Friday with liberal firebrand Rep. Alexandria Ocasio-Cortez of New York in an apparent easing of tensions with the “squad” of newcomers as they pursue shared goals.

Ocasio-Cortez’s spokesman called it a “very positive and productive meeting about progressive priorities.”

Pelosi said, “What we’re advocating for is a progressive agenda for our country.”

Yet no sooner had Pelosi stepped away from the podium than members of the Judiciary Committee stepped up to declare they were essentially well on their way to impeachment proceedings.

“This is an impeachment investigation,” said Rep. Eric Swalwell, D-Calif., “whether we should recommend articles of impeachment to our caucus.”

Freshmen Rep. Veronica Escobar, D-Texas, said, “I think especially as folks go home, my hope is that, in addition to talking about all the important kitchen table things that we all came here to work on, that there is an honest discussion within our own communities about whether we can continue to tolerate a lawless president.”

Asked whether he favored impeachment, Nadler took a long pause.

“We may decide to recommend articles of impeachment at some point, we may not, it remains to be seen,” Nadler said.

The court petition is among a half-dozen legal actions the House is taking against the Trump administration as part of Pelosi’s step-by-step strategy of building a case against the president. The Democrats contend that Trump is obstructing Congress’s constitutional ability to conduct oversight of the executive branch by withholding documents and preventing witnesses from testifying.

Democrats, including Pelosi, often note that the third article of impeachment against Richard Nixon was his obstruction of Congress.

Next week, Nadler is expected to file a lawsuit to try to enforce a subpoena against Donald McGahn, the former White House counsel and a key Mueller witness. It challenges the administration’s claim that its former employees have “absolute immunity” from testifying before Congress.

So in some ways the House is well on its way to impeachment without having to vote on it, as it conducts investigations and files lawsuits to build its case.

“Impeachment isn’t a binary thing that you either are or you aren’t,” said Rep. Mary Gay Scanlon, D-Pa.

“What we’ve been saying and what we’ve been doing is starting a process where we’re engaging in an investigation to see if we should recommend articles of impeachment,” she said. “It’s a process. We started it some months ago in some ways.”

Catering to centrist Democrats, the dozens of lawmakers who helped secure the House majority, the strategy protects those who come from districts where Trump is popular and may not want to have to take a vote on impeachment. Yet it infuriates the liberal flank, the core of the party’s activists.

Pelosi told them that if they wanted to come out publicly in favor of impeachment, to do it in a way that did not make it a moral imperative. The next morning, she delivered a similar message, telling lawmakers to say what they want about impeachment, but to do it in way that doesn’t challenge other Democrats’ views.

The comments were relayed by three people familiar with the private meetings. They were unauthorized to speak publicly and spoke on condition of anonymity.

Some Democrats grumbled that the investigations were becoming “endless,” according to one of the people.

But others say Democrats were elected to the House in large part because voters want them to stand up to Trump. If they don’t, they say their majority faces potential blowback in 2020.

“I think the ramifications are simply that we will have the ball and we fumbled it,” said Rep. Steve Cohen, D-Tenn. “I think we need to do the appropriate thing regardless of the outcome.”