Cricketer-turned-politician Imran Khan was sworn in as prime minister of Pakistan here on Saturday morning. 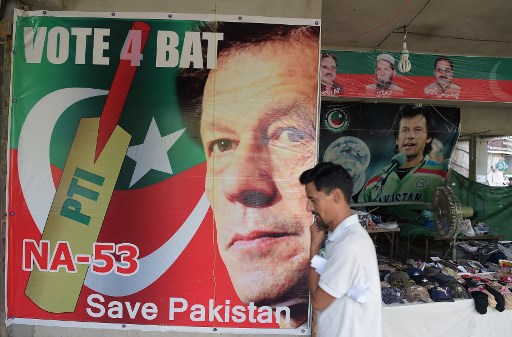 A man walks past a poster of Pakistan's cricketer-turned politician Imran Khan, and head of the Pakistan Tehreek-e-Insaf (Movement for Justice) party, at a market in Islamabad on July 27, 2018. (AFP Photo)

The ceremony was attended by diplomats, ministers, lawmakers, other political leaders, military and civil officials and dignitaries.

The national anthem was played as Imran Khan, wearing the national dress, entered the main hall of the Presidency. Khan's wife Bushra also attended the ceremony.

The national assembly, or the lower house of the parliament, elected Imran Khan on Friday.

He had received 176 votes as against 96 votes secured by his only rival Shehbaz Sharif of the opposition Pakistan Muslim League-Nawaz (PML-N).

Khan's Pakistan Tehreek-e-Insaf, or Movement for Justice, emerged as the single largest party in the July 25 parliamentary elections.