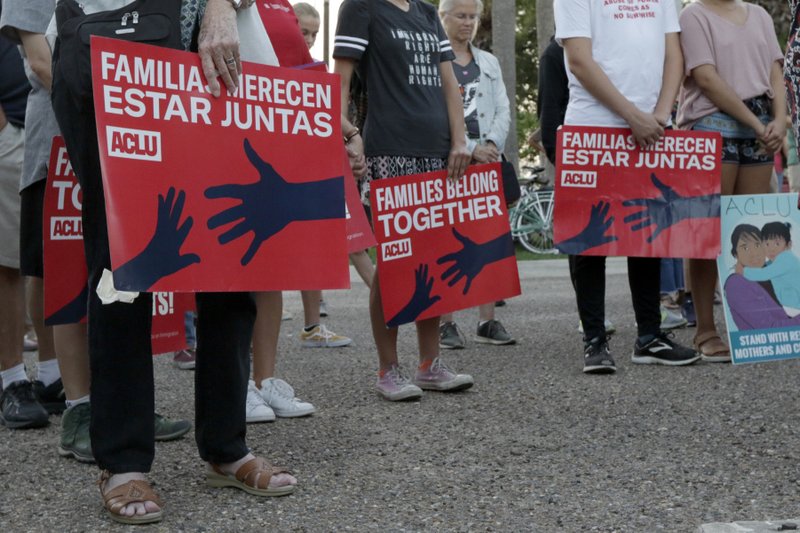 In this June 30, 2019 file photo, people hold signs that read "families belong together" in both English and Spanish during a vigil at Alice Hope Wilson Park in Brownsville, Texas to advocate against the separation of migrant families at the US-Mexico border. (Photo: AP)

As tales of wretchedness and overcrowding in government border detention facilities abound, one group of migrants is particularly vulnerable: teen moms and pregnant girls without parents of their own.

Immigrant advocates and lawyers say the young mothers don’t get special medical consideration while they’re being crammed into US facilities so packed that migrants are forced to sleep on floors or stand for days on end. As a result, the girls say they’re underfed, have poor hygiene and their babies get sick.

Their hardships aren’t over once they’re released, which can’t happen until a vetted sponsor — usually a relative — takes them in as their immigration cases wind their way through the courts. Their lack of legal status and inability to afford child care makes it nearly impossible for them to find a job, and staying in the US legally is an uphill battle even if their children are American citizens.

“The average unaccompanied minor who’s coming is facing so many challenges because of lack of access to legal representation, issues in education, lack of support, lack of mental health treatment,” said Priya Konings, the deputy director of legal services for Kids in Need of Defense, which helps unaccompanied minors. “When you compound that with anything else such as being a young parent or being pregnant, everything becomes twice as hard.”

An attorney’s shocking discovery last month of an ailing 17-year-old girl from Guatemala cradling a clearly premature infant inside a US detention center prompted a national outcry and highlighted the challenges facing the teens. The mother had had an emergency cesarean section in Mexico in early May and crossed the border with the baby on June 4. She was in a wheelchair in extreme pain when legal advocates found her.

The girl and her baby are now doing well after leaving the processing facility in McAllen, Texas, where they were held, said her attorney, Hope Frye.

“The place where they are, it’s safe and the baby is the belle of the ball,” Frye said.

The accounts from lawyers and advocates come as US immigration agencies have been struggling to handle a growing influx of migrants who cross illegally from Mexico and end up in the facilities of the ill-prepared and increasingly overwhelmed Customs and Border Protection, the first agency in charge of their detention. CBP is supposed to release the unaccompanied children to Health and Human Services — which contracts with shelter providers — within 72 hours, but the overcrowding has created a backlog that has resulted in children sometimes spending weeks in the custody of the CBP.

Customs and Border Protection has said repeatedly that it is not equipped to handle the large number of families and unaccompanied children coming to the border, and says its agents aren’t trained to be caregivers. When asked to comment on the treatment of pregnant teens and teens with babies, a spokesman pointed to the agency’s guidebook on treatment of detainees, which says underage migrants and those who are pregnant or nursing must have regular access to snacks, milk and juice.

The number of unaccompanied minors who travel to the US has grown over the last year. Customs and Border Protection apprehended over 56,200 unaccompanied youths in the Southwest border from October to the end of May, compared to 50,000 in the last fiscal year. It’s not known how many were pregnant or had babies. But the HHS’s Office of Refugee Resettlement says the agency has had about 500 teens with babies in its custody since October.

The trip to the US can be particularly dangerous for pregnant teens, said Nicole Ramos, refugee program director for Al Otro Lado, an organization that helps asylum seekers.

“I feel young pregnant girls are vulnerable to human trafficking. They don’t have resources. They’re kids, so they’re not savvy in all the ways of the world,” Ramos said.

A series of reports and federal court documents have shown that their tribulations don’t end once they are in US custody. Two reports by US government inspectors found severe and dangerous overcrowding at Border Patrol holding facilities in El Paso and McAllen, Texas.

In interviews with attorneys last month, young mothers who were being held in several Texas border facilities as unaccompanied minors described feeling hungry, cold and terrified because their babies were sick.

A 17-year-old Honduran girl with a 1-year-old daughter said she was detained for weeks at the processing center in McAllen after crossing the border on May 29. The girl told a lawyer she was separated from her husband and put in an area so crowded that some people had to sleep sitting up. The girl said she was allowed to shower once when they were detained but had not been able to again in the 12 days since, and her baby’s clothing was dirty with vomit.

“We are given sandwiches that are cold and raw, and so we don’t eat them,” the girl said.

In a separate interview, a 16-year-old Guatemalan girl with a 1-year-old son who spent at least two weeks in CBP custody told an attorney she and her child were not eating properly.

“Before we came here my baby was eating solid food three times a day but now he is only getting breast milk and sometimes a cookie. I’m only making a little breast milk because I am not eating or drinking enough,” the girl said.

Once they’re released, the young mothers face a whole new set of challenges, said Konings, of Kids in Need of Defense. Minors don’t automatically get legal representation in immigration court because it’s considered civil, not criminal. They often have no access to mental health treatment. And though US-born children qualify for welfare services, their mothers are usually afraid to ask for it for fear it might negatively affect their immigration case. Young mothers also have a hard time finding work while also caring for a child, and can’t make ends meet, Konings said.

Having an American-born child also does not guarantee the parent can stay in the country legally, Konings said. A US citizen has to be 21 years old before he or she can sponsor a parent. And even then, parents found living in the US illegally are banned from returning to America for 10 years.

“The whole concept of, ‘Oh I’ll just have a baby in the US’ I mean that’s not a thing,” Konings said. “You’re talking about 31 years. That’s just not reality.”