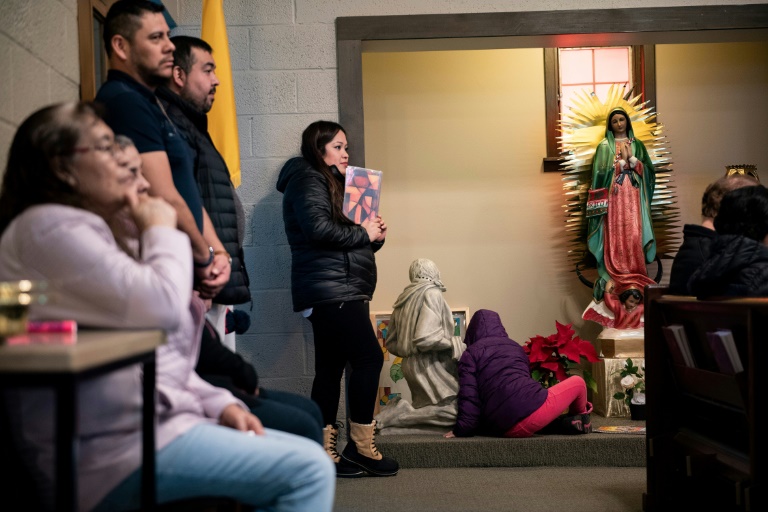 At the Catholic church in the small Iowa meatpacking town of West Liberty, the surrounding expanses of farmland covered with fresh white snow, the priest says Mass twice on Sunday.

The two sermons' messages of harmony are similar, although it feels a notch more crowded at the second Mass -- offered in Spanish in this Midwestern state's first Latino-majority town.

The choir from the English service three hours earlier makes way for a band with a guitar and Mexican-style sing-alongs.

The jokes sprinkled into the sermons also don't translate. "I have to complete them with a different punchline," deadpanned the priest at St. Joseph Catholic Church, the Very Reverend Rudolph T. Juarez.

As Iowa opens the US election season with its February 3 caucus to select presidential candidates, a team of AFP journalists spent a week driving here from Washington to feel the political temperature of a country in the midst of change.

Iowa is the sixth whitest state in the United States but West Liberty was 52 percent Hispanic or Latino in the 2010 census, which counted the population at 3,736.

The Latinos -- overwhelmingly Mexicans and Mexican-Americans but also increasingly Puerto Ricans displaced by Hurricane Maria -- are pulled in by jobs at West Liberty Foods, a turkey slaughterhouse and processing plant, whose bilingual signs at the laundromat offer immediate employment at wages starting at $12.18 an hour.

President Donald Trump, who ran a campaign that demonized Mexican immigrants, won by more than six percentage points in West Liberty's county of Muscatine, which had twice voted by much wider margins for Barack Obama.

The opposite end of Iowa is home to Representative Steve King, one of the most stridently anti-immigration members of Congress who has openly identified with white nationalism.

But on the streets of West Liberty, no one, Latino or not, identified major tensions among residents, who speak proudly of their schools' dual-language programs.

Roselia Ocampo, 28, who has lived all her life in West Liberty and has taken over managing her parents' Mexican restaurant, said she was barely aware of the town's unique demographics until she took part in a statewide gathering of FFA, a farming club common in Midwest high schools.

She and her classmates were told they didn't have to join an exercise involving books.

The instructor said, "'I didn't know you knew how to read English.' And it was just like the first time I was exposed to someone kind of profiling me just by my color."

Ocampo's father immigrated legally to the United States and first worked on the West Coast before hearing about Iowa, where the vast fields and omnipresent hog farms reminded him of his native Oaxaca.

In his off-time from work at another meat plant, he would approach Iowa farmers to buy their injured hogs, butchering them himself for juicy carnitas he served at weddings.

Eventually, the family started their restaurant, Carnitas Nino, with the father coming in at 2 am on the weekend to cook carnitas and menudo tripe soup.

Ocampo thought little about politics four years ago but this time will be sure to vote. She is deciding on a Democratic candidate to support in the Iowa caucuses, which for the first time will have Spanish-language gatherings, including in the nearby city of Muscatine.

Her political awakening included watching as her aunt was deported to Mexico.

"You can't do it without immigrants," she said. "No one is going to pick up the work that we are currently doing."

At the church, Juarez, the priest, said immigration authorities have picked up some parishioners.

"It's difficult enough to keep the domestic family together in these times without adding economic worries and the feeling you may be apprehended," he said.

As the community was starting to shift to majority Hispanic, it took advantage of a federal grant to embrace dual-language education in what remains one of the few programs of its kind in Iowa.

Rather than simply ensuring English, roughly half of the 1,300 West Liberty students are enrolled in dual-language courses in multiple subjects.

School superintendent Diego F. Giraldo, speaking with enthusiasm from his office before sunrise as he monitored ice conditions on the roads, said the community was fully behind dual-language education.

A bigger challenge, he said, was recruiting teachers. The program survives in part through an agreement between Iowa and Spain, which sends teachers for up to three years.

Giraldo said the schools saw students' Latino heritage not as a hindrance but as a way to provide a brighter future.

"They're in the United States and they need to learn English to survive. But we are not supposed to, in my opinion, take away something to make that happen," he said.

"In the future, we want the students to be able to call Argentina and say, let's do some trade. They will have the languages to do that."