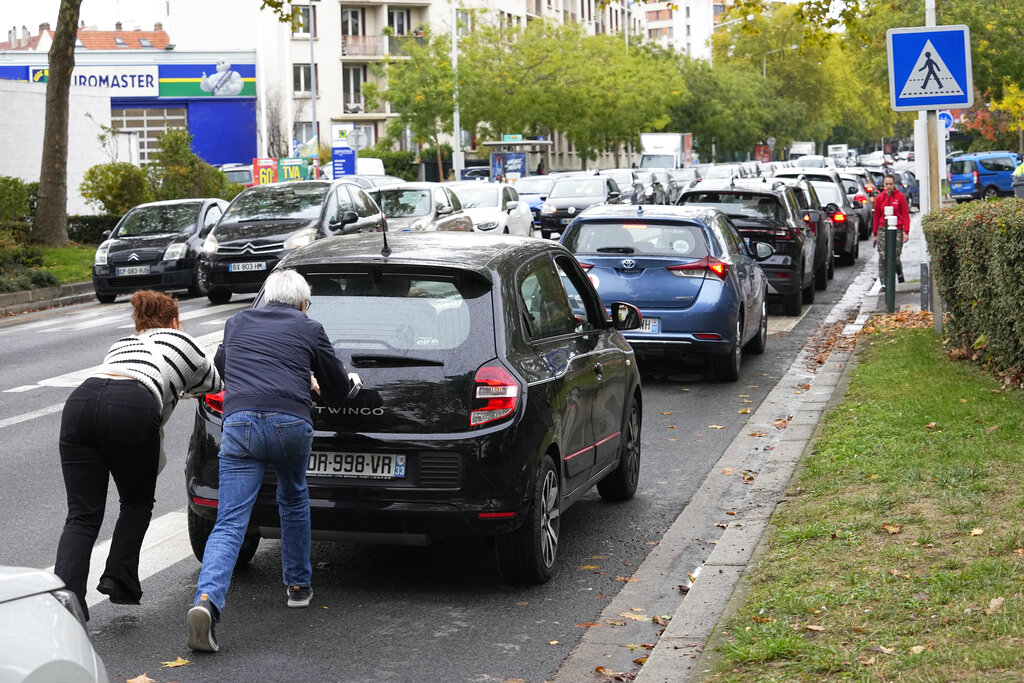 People push their car in a line of vehicles waiting to reach a station, Friday, Oct. 14, 2022 in Nanterre, outside Paris. (Photo: AP)

Even close to midnight on a school night, the tipoff was too important to ignore: A nearby gas station had just been resupplied.

So Aicha Far scooped up her 6-year-old and set off into the night. The home carer needed to refuel her car so she could continue looking after the vulnerable people on the outskirts of Paris who rely on her to keep them fed, clean and safe. The prospect of a full tank was worth dragging the kid out of bed for.

“I wrapped him in a blanket and put him in the back,” Far recalled on Saturday, as she gently coaxed an older woman she looks after to drink her breakfast hot chocolate.

Chronic fuel shortages in France sparked by strikes and panic buying are fraying nerves and testing both the resilience and ingenuity of millions of French workers who depend on their vehicles to do their jobs.

More than a quarter of gas stations nationwide were still without one type of fuel or more on Saturday, the French energy minister said. In the Paris region, the number was above a third.

Motorists have sometimes lined up for hours to refuel — not always successfully — and tempers have flared.

In the town of Versailles, southwest of Paris, 41-year-old nurse Aurelie Martin is trying to eke out the precious fuel left in her tank — and bracing for the next time she'll have to visit the pumps.

She is up well before dawn to give jabs, change dressings and dispense other essential medical care to dozens of patients each morning.

Rather than doing little hops in her Mini from one patient to the next, she's increasingly scurrying on foot between them when she can, racking up 10 kilometers (six miles) of walking each morning to save fuel.

“I’m doing the bare minimum by car,” she said as she made her rounds on Saturday. “I had hoped up to now that the situation would improve, but unfortunately it doesn’t seem to be getting better.”

The strikes have hit French refineries and fuel depots. Strikers have demanded higher wages from what they feel should be their share of windfall profits generated by high oil and gas prices amid the global energy crisis aggravated by Russia-Ukraine conflict.

After runs on toilet paper, pasta and other essentials at the height of the COVID-19 pandemic, fuel and where to find it are the latest obsessions in France. The government has urged motorists not to panic-buy. Some gas stations have banned jerrycans.

When Martin bumped into other nurses also making their early morning rounds on Saturday, gasoline was the first thing they talked about.

One nurse who'd run out of fuel told Martin that one of her patients was offering to lend her his car. On messaging groups, nurses share tips about gas stations that have been resupplied or that have priority pumps for them and other essential workers.

Martin said some of her fellow nurses have been yelled at by other motorists for trying to cut to the front of lines.

With 30 to 40 patients to home-visit per day, Martin knows she'll need to refuel early next week.

“My day off is on Tuesday and I think the full tank that I had will last until then,” she said. “So on Tuesday, I’ll see if I need to spend the day lining up and that is what I will do if a gas station hasn’t been set aside for us."

“Truth be told,” she added, "I have been pushing back the inevitable moment.”