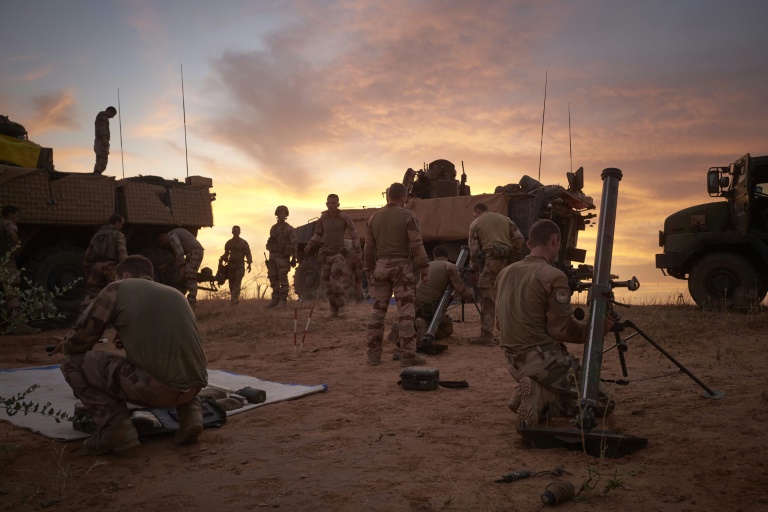 As night draws in, troops draw up their armoured personnel carriers in a square and ready mortars in case of attack.(Photo: AFP)

As night fell over the Sahel, the French soldiers drew their armoured vehicles into a protective square, rather like the wagon-borne settlers of America's Old West.

"We're setting up a tactical camp to be able to spend the night in safety," said Captain Jean-Baptiste, commanding the hundred or so soldiers in the temporary base.

Yet the troops were not in the prairie but in the badlands of West Africa, facing an elusive and ruthless enemy.

The border region of Mali, Burkina Faso and Niger lies at the centre of a jihadist revolt spreading along the Sahara's southern rim.

Their insurgency has claimed thousands of lives, driven hundreds of thousands from their homes and inflicted crippling economic damage to some of the world's poorest countries.

Such scenes are everyday for troops from France's 4,500-strong Barkhane mission when they are deployed in the field.

AFP followed their exercise, Bourgou IV, which included local troops, for two weeks while the soldiers tried to flush militants out of the forests and swamps of the border region.

The embed occurred a few weeks before 13 French soldiers died in a mid-air helicopter collision in northern Mali -- the worst single loss of life for the French military in nearly four decades.

Every night, the soldiers draw the vehicles into formation and pitch the makeshift camp that allows them a brief moment of respite after punishingly long days.

Romain, a corporal who like Captain Jean-Baptiste only gave his first name in line with military procedure, hangs a pocket mirror on his armoured vehicle and lathered his face with shaving foam.

A few metres away, a radio operator and an infantryman, both former cooking students, used the chocolate from their rations to bake a cake.

Further away still, others played cards.

The stars came out as night fell on the temporary camp, which goes by the French acronym of BOAT. Cots were mounted with mosquito nets and the soldiers opened their containers of rations, one by one.

The protein-stuffed rations are meant to be enough for a whole day. Every soldier jokes about their taste.

"When we talk about the BOAT, people think we're at Club Med," said a non-commissioned officer who declined to be named.

"They don't see all the logistics, the security and the fact that we're sleeping in a war zone."

Not everyone got to sleep, however.

All night long, soldiers stood guard while others rested. Heavy weaponry was ready at hand.

"We observe, we look for clues, we look for lights, we check to see we are not being observed," said Martin, a sergeant. "I could use some sleep!" he said, with a wry smile.

The infantrymen have dawn starts and lug guns and heavy equipment all day. Sometimes they only get a few hours sleep a night.

After setting up camp, the soldiers discovered a man -- believed to be an informer -- hiding in a tree not far away.

"Three armed individuals were seen in the east, one in the west," said one officer.

They fired their weapons for several hours and thought they had destroyed one of the vehicles, but a sweep the following morning turned up nothing: no truck, no dead jihadists.

No other attack occurred during operation Bourgou IV.

But stress was ever-present, and though the night camp offered some rest, many soldiers awaited their return to the permanent base in Gao, in northeastern Mali, with impatience.

There, one can drink beer, eat a proper meal, do sport and at last call home.

"We are always on the lookout here," said Romain, the corporal.

"I'm shaving now but if the alarm goes off, I'll put my helmet and bullet-proof back on with the shaving foam still on my mug -- that's it".