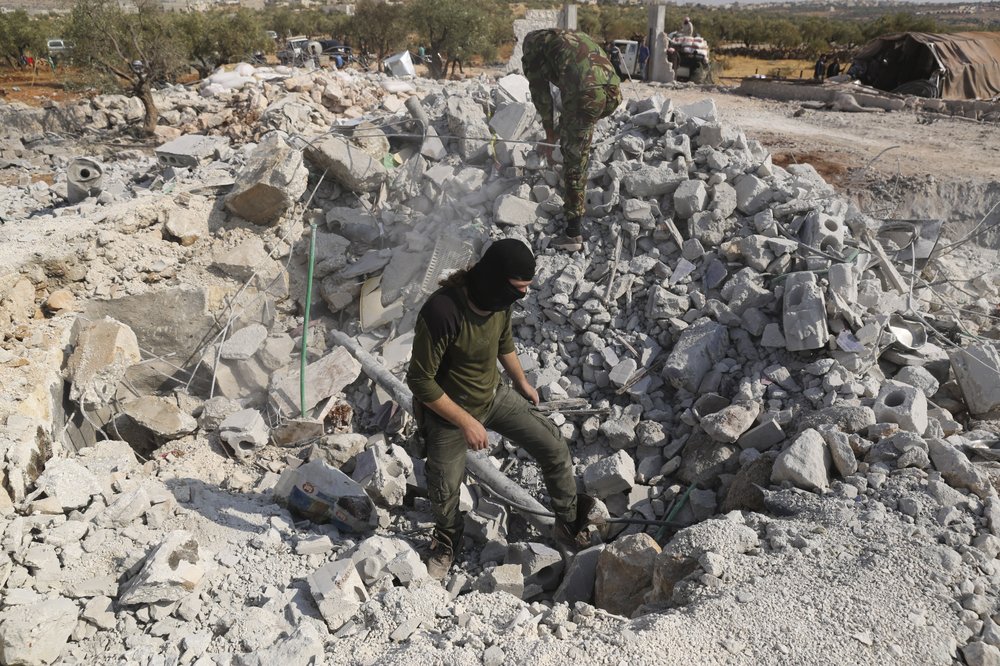 In this Oct. 27, 2019, file photo, people look at a destroyed house near the village of Barisha, in Idlib province, Syria, after an operation by the US military which targeted Abu Bakr al-Baghdadi, the shadowy leader of the Islamic State group. (Photo: AP)

In his last months on the run, Islamic State group leader Abu Bakr al-Baghdadi was agitated, fearful of traitors, sometimes disguised as a shepherd, sometimes hiding underground, always dependent on a shrinking circle of confidants.

Associates paint a picture of a man obsessed with his security and well-being and trying to find safety in towns and deserts in eastern Syria near the Iraqi border as the extremists’ domains crumbled. In the end, the brutal leader once hailed as “caliph” left former IS areas completely, slipping into hostile territory in Syria’s northwestern Idlib province run by the radical group’s al-Qaida-linked rivals. There, he blew himself up during an Oct. 26 raid by US special forces on his heavily fortified safe house.

For months, he kept a Yazidi teen as a slave, and she told The Associated Press how he brought her along as he moved, traveling with a core group of up to seven close associates. Months ago, he delegated most of his powers to a senior deputy who is likely the man announced by the group as his successor.

The Yazidi girl, who was freed in a US-led raid in May, said al-Baghdadi first tried to flee to Idlib in late 2017. She said one night she was loaded into a three-vehicle convoy that included the IS leader, his wife and his security entourage, headed for the province. The convoy reached the main road but then turned around, apparently fearing it would come under attack, said the girl, who was 17 at the time.

For about a week they stayed in the southeastern Syrian town of Hajin, near the Iraqi border. Then they moved north to Dashisha, another border town in Syria within IS-held territory.

There, the Yazidi teen stayed for four months at the home of al-Baghdadi’s father-in-law, a close aide named Abu Abdullah al-Zubaie. Al-Baghdadi would visit her there frequently and rape her and at times beat her, the teen said. He would only move at night, wearing sneakers and covering his face, always with around five security men who addressed him as “hajji” or “sheikh,” she said. The AP does not identify victims of sexual assault.

“When I asked him anything, he would not give me an answer for security reasons. Not everyone knew where he was,” she said.

In the spring of 2018, she was given to another man, who took her out of Dashisha. That was the last time she saw al-Baghdadi, though he sent her a piece of jewelry as a gift, the teen said.

It appears al-Baghdadi then moved from place to place in eastern Syria for the next year as one IS stronghold after another fell to US-backed Kurdish-led forces, before heading to Idlib sometime in the spring.

During that time, al-Baghdadi was a “nervous wreck,” pacing up and down and complaining of treason and infiltrations among his “walis,” or governors of the group’s self-declared provinces, his brother-in-law, Mohamad Ali Sajit, said in an interview with Al-Arabiya TV aired last week.

“This is all treason,” Sajit recalled al-Baghdadi shouting.

Sajit, an Iraqi who was married to another of al-Zubaie’s daughters, was arrested by Iraqi authorities in June. He said he saw al-Baghdadi several times over 18 months, starting in Hajin in late 2017. The last time was in the desert regions along the Syrian-Iraqi border not long before Sajit’s own capture. He said al-Baghdadi entrusted him with delivering messages on flash drives to lieutenants inside Iraq.

Iraqi and Syrian Kurdish officials have said they separately cultivated sources that led to the IS leader, and Sajit is believed to be one of them. A US official said it seemed the Syrian Kurds managed to get a “guest” inside al-Baghdadi’s inner circle whose information was key in the hunt.

Sajit said al-Baghdadi’s movements were heavily restricted, more so as greater IS territory was lost. He walked around with a suicide belt, even slept with one near him, and made his aides also carry belts. He never used a cellphone; only his aide Abu Hassan al-Muhajer did, using a Galaxy 7, Sajit said.

The stress worsened the IS leader’s diabetes, and he had to constantly monitor his blood sugar and take insulin. He didn’t fast during the holy month of Ramadan and forced his aides not to fast as well, Sajit said.

At times, al-Baghdadi was disguised as a shepherd, he said. When al-Baghdadi’s security chief, Abu Sabah, got wind of a possible raid on the desert Syrian-Iraqi border area where they were hiding they took down their tents and hid al-Baghdadi and al-Muhajer inside a pit covered with dirt, Sajit said. They let sheep roam around on top of the pit to further disguise it. Once the threat of the raid was over, they returned and put the tents back up, he said.

Al-Baghdadi moved with a circle of five to seven people, including al-Muhajer, al-Zubaie and Abu Sabah; and the group’s former governor for Iraq, known as Tayseer or Abu al-Hakim. Al-Muhajer was killed on the same day as al-Baghdadi, in a separate US-led military operation, following a Syrian Kurdish tip, in Jarablus, also in northwestern Syria; al-Zubaie was killed in a raid in March. On Monday, Turkish officials said they arrested al-Baghdadi’s older sister in northwestern Syria’s Azaz region. All are areas outside of government control.

The IS leader was also in contact with his top deputy, Hajji Abdullah, Sajit said. Iraqi officials say al-Baghdadi put him in charge of most of the group’s administrative and financial affairs. Sajit said he believes Hajji Abdullah is actually the man that IS named as al-Baghdadi’s successor before his killing, identified by the nom de guerre Abu Ibrahim al-Hashemi Al-Qurayshi.

US officials said they did not know when al-Baghdadi arrived in Idlib but said he chose the location because it was the last territory outside of Syrian government control. US-allied Syrian Kurdish officials said they pinned down his movements in May but suspected he left to there after the fall of the last IS territory in late March.

There, he hid in a compound in the village of Barisha, about 5 kilometers (3 miles) from the border with Turkey. Like many of Idlib’s border towns, it is packed with people displaced from across Syria and is administered by Hayat Tahrir al-Sham, a militant group affiliated with al-Qaida and a rival to IS.

The compound belonged to a man named Abu Mohammed al-Halabi, who was a sheep trader but had little contact with his neighbors, several residents told the AP. They spoke on the condition of anonymity fearing they would be endangered by talking about the site. Iraqi officials said al-Baghdadi’s “technician”_a man who took care of logistics— was killed with him in the raid.

One resident said that nearly a dozen helicopters hovered over their village before 11 p.m. the night of the Oct. 26 US-led raid.

“We went out in the balcony to see and they started shooting, with automatic rifles. So we went inside and hid,” the resident said. Then there was an airborne operation west of the village, in the direction of al-Halabi’s house. Later, the Americans warned residents to move away from the house because they were going to blow it up.

“No one really expected al-Baghdadi to be here,” another resident said.