In lockdown easing, UK’s Johnson says groups of 6 can meet 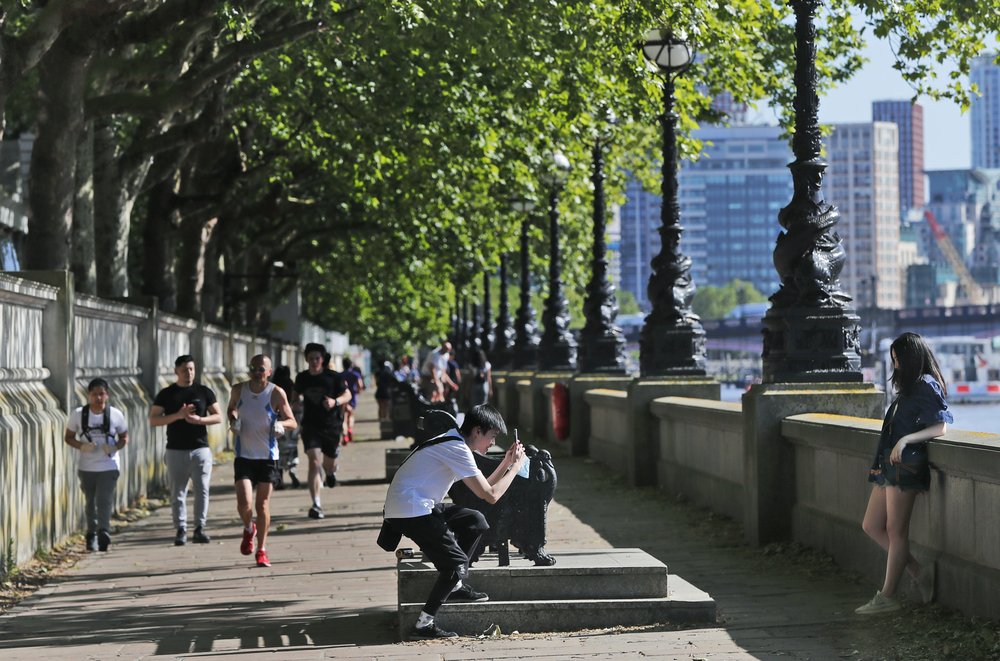 People enjoy the sunny and warm weather on the banks of the river Thames in London, Thursday, May 28, 2020. (Photo: AP)

Outdoor gatherings of six people from different households will be allowed from next week as part of another easing of the coronavirus lockdown in England, U.K. Prime Minister Boris Johnson said Thursday.

But the government’s chief scientific adviser cautioned that Britain was at a “fragile” point in its fight against the virus, with some 2,000 new infections still being reported each day.

Johnson, who has faced days of scorn for keeping his top aide Dominic Cummings in post following his controversial travels during the lockdown, said families and friends in groups of up to six can meet from Monday in outdoor spaces, including public parks and private gardens.

Johnson said at a news conference that this was potentially a “long awaited and joyful moment” for parents and grandparents but stressed that people must remain 2 meters (6.5 feet) apart.

The prime minister also confirmed that schools will start reopening from Monday, initially for some younger students. Outdoor-based shops, such as car showrooms, can also reopen.

Johnson said the “limited and cautious” changes were possible because five government-imposed tests have been met. These include “sustained and consistent” falls in virus infections and the daily death rate.

Though the number of people dying after testing positive for COVID-19 has fallen since the peak in early April. the U.K. still recorded another 377 deaths in all settings including hospitals and care homes, taking the total to 37,837.

“This is not a time to say ’Everything’s OK, we’re relaxing measures, everything’s going to be rosy,” said the government’s chief scientific adviser, Patrick Vallance. “We are at a fragile state.”

Johnson continued to brush aside questions about Cummings, and said that the issue was now closed after police will not take any action on the matter

Johnson has been urged to sack Cummings by political opponents as well as a number of his own Conservative lawmakers after his adviser drove 250 miles (400 km) to his parents’ house in Durham, northeast England, at the end of March while the country was under a “stay-at-home” order. Cummings made a later journey to a scenic town 30 miles (50 km) away.

Following an investigation, Durham Constabulary said the drive to Durham did not breach the rules but the second trip, to the town of Barnard Castle, might have been “a minor breach” of lockdown rules “that would have warranted police intervention.” But the force said “there is no intention to take retrospective action” because no one else has been fined retrospectively.

More than 14,000 people in Britain have been fined by police for violating a ban on all but essential travel.

Cummings has defended his actions, saying he traveled to ensure that his 4-year-old son could be looked after if he and his wife, who both had coronavirus symptoms, became sick. He says he drove to Barnard Castle to test whether his eyesight, which had been affected by illness, was good enough for the long trip back to London.

Johnson refused to let his chief medical and scientific advisers answer questions about Cummings at the government’s daily news conference, saying it was a “political” matter.

Johnson is also facing pressure to scrap a government immigration-related policy after he appeared to be caught unaware of the fact that many migrants to the U.K. cannot access financial support during the pandemic.

Introduced in 2014, the “no recourse to public funds” status is a standard condition applied to mainly non-European people staying in the U.K. with temporary immigration status.

Johnson said Wednesday he would “see what we can do to help” people who have no recourse to public funds after he was challenged by Stephen Timms, a lawmaker from the main opposition Labour Party.

That’s raised speculation that his Conservative government may be poised to announce another change in policy. Last week, under sustained pressure from opposition parties and from some of its own members, the government said overseas health and social care staff would be exempt from a surcharge to use the National Health Service. It also said the families of all workers in the NHS and in care homes, not just doctors and nurses, who died as a result of the virus would be granted the right to remain in Britain.

Mark Russell, chief executive of The Children’s Society charity, said more than 100,000 young people are affected by the visa conditions and urged the government to ease up on the benefit restrictions.