The Cameroonian men who share 10 mattresses on the floor of a third-floor apartment above a barber shop walk every morning to the busiest US border crossing with Mexico, hoping against all odds that it will be their lucky day to claim asylum in the United States. Their unlikely bet is that a sympathetic Mexican official will somehow find a spot for them. 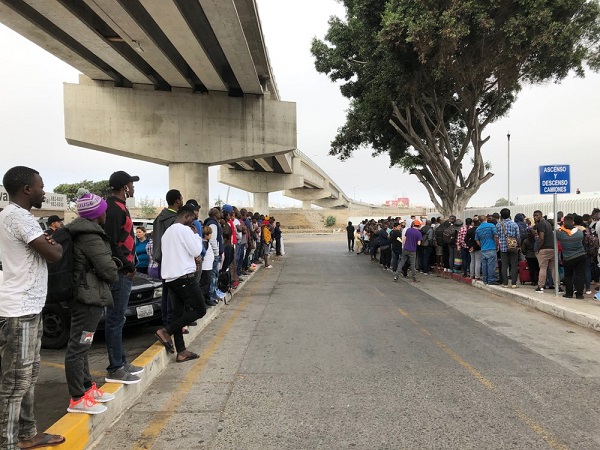 In this July 26, 2019 photo, a group of migrants in Tijuana, Mexico, listen to numbers being called for people to claim asylum in the US The long waits are starting to test the patience of immigrants and border towns. (Photos: AP)

“I go because if they open up, I’m in,” said Rashidou Hdzekasaah, 35, who has been idled in Tijuana for two months and still has more than 6,000 names ahead of him on a waiting list to claim asylum at the San Diego crossing.

English-speaking Cameroonians fleeing atrocities of their French-speaking government helped push Tijuana’s asylum wait list to 10,000 on Sunday, up from 4,800 just three months earlier. At the same time, the US is returning more Central Americans to Mexico to wait for dates in US immigration court, putting asylum seekers in an unexpected, prolonged period of uncertainty.

Based on US government figures and reporting by The Associated Press, at least 50,000 migrants who have reached the US border with Mexico are on a waiting list for an initial attempt to seek asylum or waiting for a court hearing in the US after being sent back.

The figure represents a dramatic increase from earlier in the year. It is unknown how many have entered the US illegally, decided to settle in Mexico or gone back to Central America.

The long waits are testing the patience of some asylum seekers and residents in border cities. 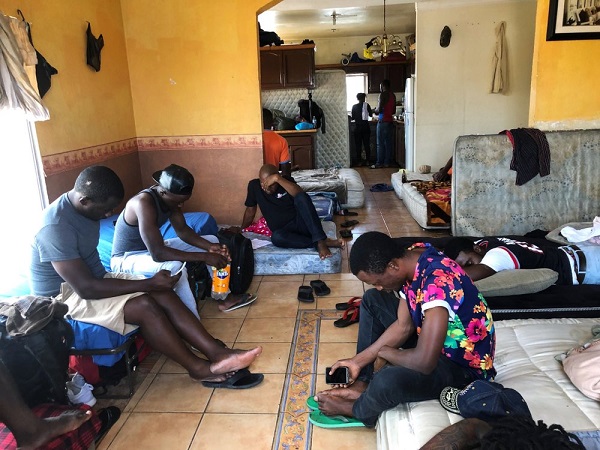 In this July 28, 2019, photo, Cameroonians wait in a rented apartment in Tijuana, Mexico, until their names are called to claim asylum in the US.

More than 100 Cameroonians blocked the path of the government immigration vans last month, demanding more transparency about who gets accepted from the wait list to request asylum. It came after several days on which the US accepted no claims. People getting called now have been in Tijuana about 3½ months, but the wait is expected to lengthen.

Turning Mexico into a waiting room for US asylum seekers may be the Trump administration’s most forceful response yet to a surge of migrants seeking humanitarian protection, many of them Central American families. The effort is part of a broader crackdown on immigration, subject of a polarizing debate that became even more pitched after the discovery of an anti-immigrant screed tied to a man charged with killing 22 people in El Paso, Texas, Saturday.

Mexico, responding to President Donald Trump’s threat to raise tariffs, agreed in June to rapid expansion of a new US policy to make asylum seekers to wait in Mexico while their cases wind through clogged US courts. US Customs and Border Protection acting Commissioner Mark Morgan said Thursday that more than 30,000 people have been returned to Mexico since the policy was launched in January. 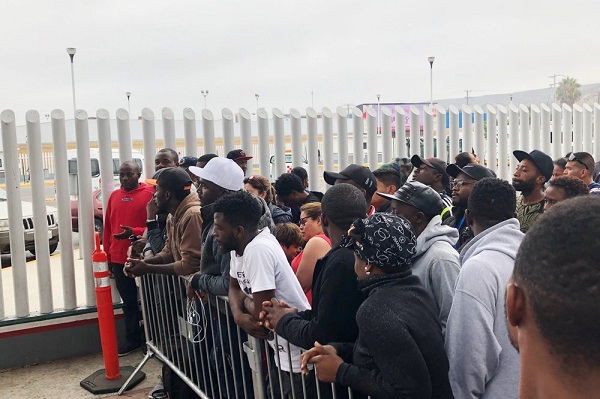 In this Sunday, July 28, 2019, photo, migrants in Tijuana, many from Cameroon, listen to names being called for those who can claim asylum that day in the US.

Many others haven’t even reached the first step toward asylum. Lines began to swell last year when the Trump administration limited the number of cases it accepts each day for processing, leaving it to Mexican agencies, volunteers, nonprofit organizations and immigrants themselves to decide who fills available slots. US authorities say the practice, called “metering,” responds to an inability to handle everyone at once.

The AP tallied about 19,000 names on lists in four Mexican border cities it visited in late July. Haphazard and often-dubious arrangements vary sharply by city.

The waiting list in Ciudad Juarez, across from El Paso, jumped to 5,600 people from 4,500 in early May. The US, which has generally processed 20 to 30 claims a day, went six days without accepting anyone on an eight-day stretch in July.

Nuevo Laredo, across from Laredo, Texas, had 1,800 names and Matamoros, across from Brownsville, had 1,500. There were fewer than 1,000 each in San Luis Rio Colorado, near Yuma, Arizona, Reynosa, near McAllen, Texas, and Piedras Negras, near Eagle Pass, Texas, according to advocates and shelter managers.

William Mendoza, 45, fled Guatemala’s western highlands with his 17-year-old son, thinking he would be freed in the US with a notice to appear in court. Families have generally been released in the US due to lack of family detention space and a federal court order that children can’t be held more than 20 days.

After crossing the border illegally in Texas’ Rio Grande Valley, Mendoza and his son were told after three days that there wasn’t enough room to hold them and they would be flown to San Diego.

In San Diego, US authorities told about 130 passengers on his flight that they would have to wait in Mexico for their court dates. Mendoza got a notice to report to the border crossing on Sept. 13 for court, about two months out.

“The news hit everyone hard — women, men and children,” said Mendoza, who paused while digging a ditch for new communal sink at the Ambassadors of Jesus shelter, which sits at the bottom of a canyon where the sound of roosters and smell of pigs permeate the air.

Tijuana’s wait list has skyrocketed in large part because so many Cameroonians are showing up to request asylum. Many of them share personal accounts of Cameroonian soldiers burning their villages, shooting indiscriminately and torturing any perceived opponents.

Beltran Ngi, 33, goes to the Tijuana border crossing to hear someone tick names off the waiting list on a bullhorn around 8 a.m., even though there are more than 8,000 names ahead of him. He is suspicious of asylum seekers who are escorted separately to a waiting Mexican immigration van without having their names called. On a recent Friday, about half of 40 spots were for people whose names weren’t called.

Ngi, who hopes to use his English to work at a Tijuana call center even though his 20-day transit permit through Mexico expired, shared a two-bedroom apartment with seven others but couldn’t afford his roughly $50 share of monthly rent. He moved to a migrant shelter to sleep and eat for free.

He said he fled Cameroon after five days imprisoned in a cell with 40 people who shared one pail as a toilet. Before he was imprisoned, he was visiting an uncle in a neighboring village when soldiers beat his father and set his house on fire.

Ngi, who hopes to join family in North Dakota, followed a route favored by Cameroonians: flying to Ecuador due to loose restrictions on accepting visitors from the African nation and traveling through eight countries. He was famished on his 11-day walk through Panama but reminded himself it was better than Cameroon.

“It’s better to die in the jungle than to die of bullets,” he told himself.