Epigmenio Centeno had hoped to cross the Mexican border into the United States in the coming months, but he and his wife have shelved their plans for fear of being separated from their two sons under US President Donald Trump’s “zero tolerance” immigration policy. 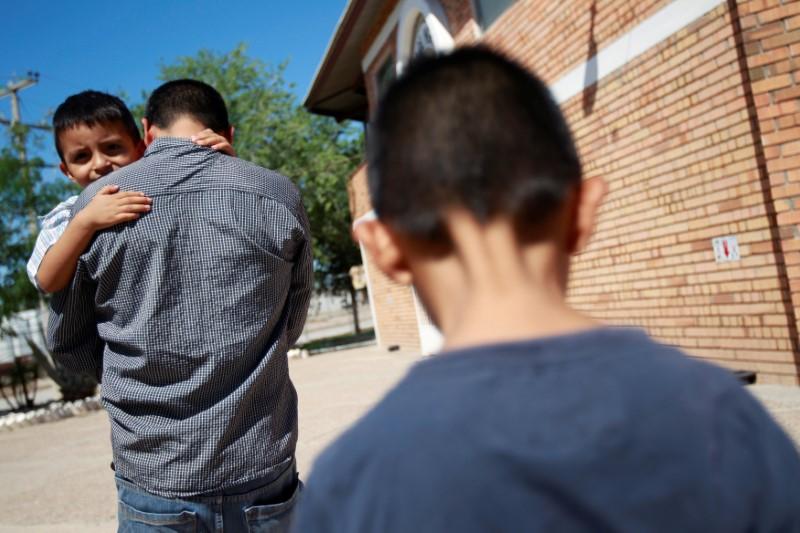 Salvadoran migrant Epigmenio Centeno carries his three-year old son Steven Atonay, as his nine-year son old Axel Jaret follows, outside the shelter House of the Migrant, after Epigmenio decided to stay with his children in Mexico due to US President Donald Trump's policy that separates immigrant children from their parents, in Ciudad Juarez, Mexico June 19, 2018. (Photo: Reuters)

The family’s quandary mirrors life-changing decisions being made all the way from Central America to the Mexico-US border, as migrant families en route to the United States take pause to consider whether losing sight of their children is worse than the violence back home.

A postal courier from El Salvador, Centeno, 40, began his journey north with his family more than a year ago, when he found himself targeted in a brutal territorial battle between Central America’s two most violent gangs, MS-13 and Calle 18.

The family spent months seeking Mexican refugee status, a step taken by more and more Central Americans heading north, to allow them to avoid extortion or deportation while they gather resources to make the next move into the United States.

The four then slowly made their way up to Ciudad Juarez, where they eventually planned to cross into the United States, hand themselves into U.S border patrol and ask for asylum.

But after seeing news reports of wailing children in cages, Centeno said he now planned to stay longer in Mexico, taking a low-paying job in the kitchen of a seafood restaurant rather than risk losing his children indefinitely.

“You leave with the intention of going to the United States, where you can improve your life and that of your sons,” he said, flanked by his two boys, Axel, 9, and Steven, 3.

“But as things stand today, it’s difficult, because if you get caught, they take your kids away. I think I’m going to stay here, in Mexico, and establish myself.”

A rebound in the number of Central American migrants - most fleeing incessant gang violence in their impoverished homelands - being detained on the southern border prompted the Trump administration to implement the zero tolerance policy.

That policy, announced in April, directed that all immigrants apprehended while crossing the US-Mexico border illegally should be criminally prosecuted.

Parents referred by border agents for prosecution are held in federal jails, while their children are moved into border shelter facilities under the custody of the Office of Refugee Resettlement, a Department of Health and Human Services agency.

US Customs and Border Protection said on Tuesday that 2,342 children had been separated from their parents at the US-Mexico border between May 5 and June 9.

The policy has sparked condemnation from Democrats, some of Trump’s fellow Republicans, UN officials, medical professionals and rights activists.

If more migrants like Centeno choose to stay in Mexico, it could present a new immigration challenge for a country already struggling with a dizzying 11-fold rise in asylum applications from 2013 to 2017.

“I can’t risk that they take my girls away from me,” said Reina Esmeralda, who left El Salvador with her two daughters, and was in the southern Mexican town of Ixtepec, not far from the Guatemalan border. “I’d rather find work here than risk going further and have them taken from me.”

Mexican Foreign Minister Luis Videgaray on Tuesday called the separations “cruel and inhumane” and urged the US government to reconsider the practice. He also said Mexico would be working closely with the Central American governments to address the situation.

“The indirect effect of this Trump policy, which I’m sure they were aware of, and don’t even care, is handing the problem to Mexico,” said Gustavo Mohar, a former Mexican immigration official.

'Can't stay back there'

But others within sight of their goal after grueling journeys from Central America said they were unwilling to give up and return to the horrors they had left behind. In the border town of Tijuana, a dozen migrant families interviewed by Reuters said they would try their luck, despite the risks.

Josue Mendez and his girlfriend, Carmen Palma, said they left San Salvador with their three children after Palma was pressured by a gang member into becoming his sexual partner.

Mendez, who has already been deported from the United States, said he was advised by other migrants in the Mexican city of Hermosillo that he should apply for asylum at the border gate to minimize chances his family would be split under the new policy.

“Our plan was to cross to the other side and wait for border patrol,” he said, in a migrant shelter in Tijuana, as the family prepared to apply. “They explained to us that it doesn’t work like that anymore, and that it was better to sign up and wait here. So that’s what we’ve done.”

Vanessa Bonilla also prepared to apply for US asylum, having traveled with her three young children from Honduras. Despite the risks, she was convinced it was better than returning to the gangs she said killed the father of her children and were now threatening her.