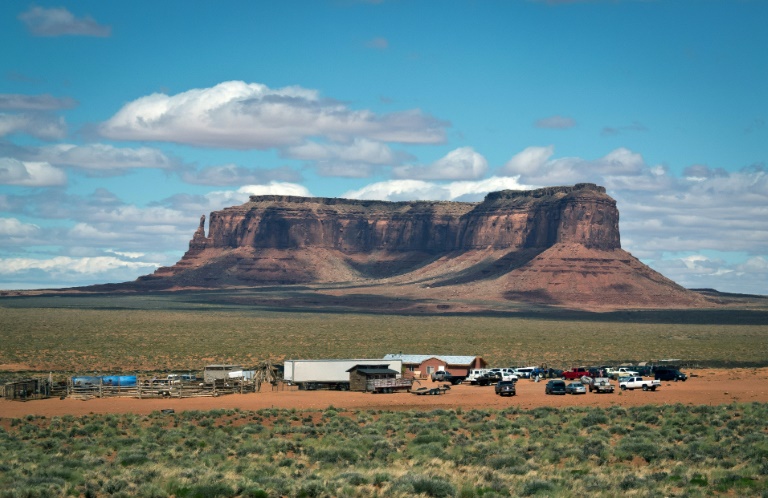 A Navajo farm is seen next to a rock formation in Monument Valley Navajo Tribal park, Utah, in 2014. (Photo: AFP)

The coronavirus is hitting the United States' largest Native American territory hard, with a spike in cases bringing long-standing disparities to the fore in a land marked by the trauma of past waves of disease.

With its towering sandstone mesas, majestic canyons and ancient ruins, the Navajo Nation is home to about 175,000 people in an area that straddles three southwestern states and is roughly the size of Scotland.

The reservation saw its first COVID-19 case on March 17 and the number has since exploded to 1,206 -- a per capita infection rate just behind the worst-hit states of New York and New Jersey.

Overall deaths remain relatively low right now at 48, but that figure is expected to increase in the coming weeks as the disease takes its toll on those who are seriously ill.

Officials and experts cite a range of factors, from chronic underfunding of the medical system that caters to Native Americans, to poor phone and internet connectivity exacerbating information gaps.

One of the starkest reasons: A lack of access to the running water health authorities have repeatedly stressed is necessary to keep the virus at bay through hand washing.

Up to "30 percent of our citizens do not have access to running water and have to haul water from 20 to 30 miles away for their drinking water and livestock," Navajo Nation President Jonathan Nez told AFP.

"Right here in the middle of the most powerful nation, the United States of America, our citizens don't have the luxury of turning on a faucet to wash your hands with soap and water."

That's because many native lands were passed over when the US expanded its running water and sanitation infrastructure a century ago, according to a recent report by water nonprofit DigDeep.

Native Americans are also disproportionately affected by poverty-linked health conditions that lead to more serious forms of the COVID-19 illness, such as heart disease and asthma, said Matthew Heinz, a doctor at Tucson Medical Center who has been treating members of the Apache and Tohono O'odham tribes.

In particular, they have a greater chance of having diabetes than any other US racial group, according to the Centers for Disease Control and Prevention -- a factor that has been linked to an abnormal and often deadly autoimmune response in coronavirus patients.

The Navajo Nation was established by a treaty in 1868, after its inhabitants, who also call themselves "Dine," returned to the ancestral land they were forcibly deported from four years earlier.

Like other Native American peoples, they gave up enormous tracts in land in exchange for federally supported free health care and education in perpetuity, said Allison Barlow, director of the Johns Hopkins Center for American Indian Health.

It's a promise that's never been adequately fulfilled.

"The IHS average per capita spending per user today is $3,333 compared to $12,744 for Medicare (a state program for the elderly) and $9,404 for veterans' medical spending," said Barlow.

Congress has earmarked substantial relief for the tribes hit by the pandemic, with $8 billion to be released soon, "but the challenge now is to be able to spend it on what is needed, given the global shortages in supply of health care equipment and personnel," she added.

Another challenge: the Navajo often live in overcrowded conditions with multiple generations of family members living under one roof.

"Here, we have not just our immediate family, not just our extended family," explained Nez. "We have a clan family."

With the tribe's language endangered, elders are held in sacred esteem adding to psychological stress over fears of losing them.

Native Americans have borne the brunt of past pandemics -- the group's mortality rate during the H1N1 (swine flu) pandemic of 2009 was four times higher than all other racial categories combined, a CDC report found.

Entire communities were likewise decimated by the Spanish flu of 1918.

Since the arrival of the first European conquistadors, "they have experienced waves of decimation from 'novel viruses,' some systematically used by the colonists as germ warfare to wipe out their peoples," said Barlow.

Her organization and other non-profits are stepping in to help fill the resource gap by improving local health facilities and delivering care packages to those in need, as well as vital Personal Protective Equipment.

For Nez, the increased attention during this crisis is long overdue.

"We are the first citizens of this country, but usually we would be ignored," he said, adding that his sovereign nation was open to working with other countries.

"I hope it changes for the better."