In a new documentary series set for release Friday Prince Harry is once again emphasizing that his family turned a blind eye to the struggles of his wife Meghan Markle, saying he will "never be bullied into silence." 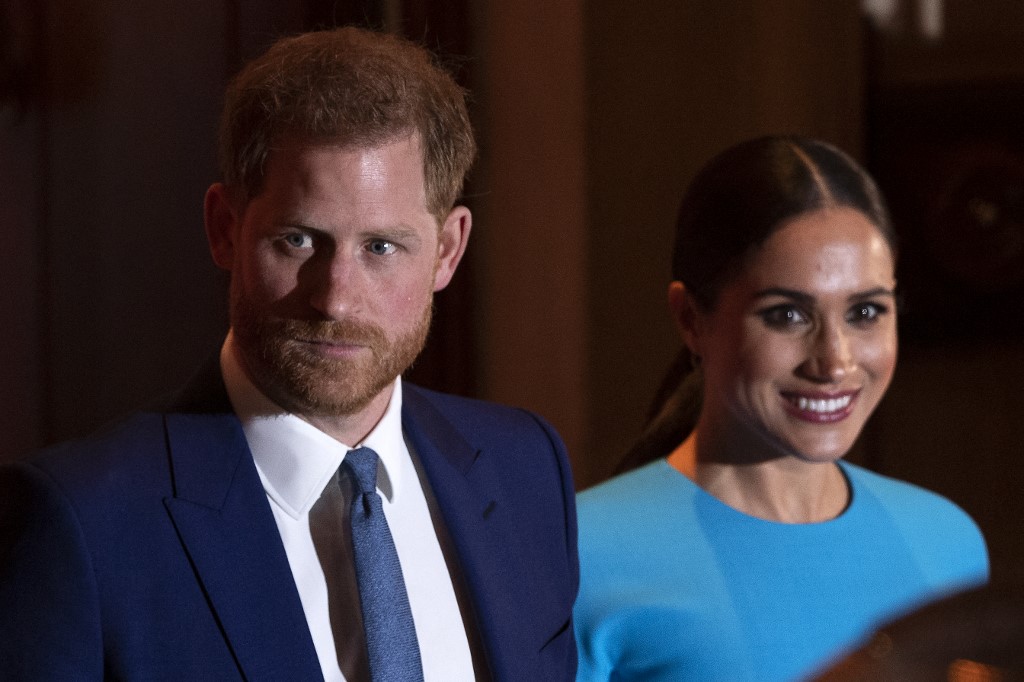 In this photo taken on March 05, 2020 Britain's Prince Harry, Duke of Sussex (L), and Meghan, Duchess of Sussex leave after attending the Endeavour Fund Awards at Mansion House in London. (File photo: AFP)

The series comes out a day after the release of an independent inquiry in Britain that found that a BBC journalist used falsified documents to land a sensational 1995 sit-down with Princess Diana, the mother of Harry and his elder brother William, in which she detailed her troubled marriage to Prince Charles.

"I thought my family would help, but every single ask, request, warning, whatever it is, just got met with total silence or total neglect," Harry said concerning his wife's depression after the birth of their son Archie.

Both Harry and his spouse have already detailed mental struggles, with Meghan saying she had suicidal thoughts in 2019.

In the Apple+ series entitled "The Me You Can't See" -- which Harry co-produced with Oprah Winfrey -- the grandson of Britain's Queen Elizabeth II says he felt ashamed going to his family, because he knew "that I'm not going to get from my family what I need."

Focused on combatting the stigma surrounding the issue of mental health, the new docuseries doesn't drop any new bombshells, but it sees the youngest son of Prince Charles and Diana deal a new blow to Windsor Castle.

The couple sat with Oprah at length for a CBS interview broadcast in early March, triggering the royal family's biggest crisis since Harry's mother died in a car crash in 1997.

In the new series Harry focuses criticism particularly on his father, who previously has been accused of indifference towards his children.

"My father used to say to me when I was younger, to both William and I: it was like that for me, so it's going to be like that for you," the 36-year-old also known as the Duke of Sussex says.

"That doesn't make sense. Just because you suffered that doesn't mean that your kids have to suffer," Harry says.

"In fact quite the opposite. If you suffered, do everything you can to make sure that whatever negative experiences that you had, you can make it right for your kids.

Harry has spoken to his father multiple times since the Oprah interview came out, notably after the funeral of his grandfather, Prince Philip, according to British media.

But their relations remain tense.

The majority of Britons hold unfavorable opinions of Harry and Meghan, according to a recent YouGov poll, as Prince Charles' ratings have jumped.

Some British press accuses the couple of both denouncing media treatment and using coverage to boost their image.

In the series Harry says that as a boy he felt powerless to protect his mother, who was constantly hounded by the press.

On Thursday, journalist Martin Bashir apologized for using fake bank statements to persuade Diana to let him interview her for the BBC.

In the series Harry also details his experience with therapy, saying it has "equipped me to be able to take on anything" and especially helped him cope with the death of his mother when he was 12.

He said being with Meghan helped him realize the importance of mental health: "I knew that if I didn't do the therapy and fix myself that I was going to lose this woman who I could see spending the rest of my life with."

The Duke and Duchess of Sussex in January 2020 announced they would quit frontline royal duties.

They relocated to California, where Meghan is from.

Harry says in the show his greatest regret is not "making more of a stance earlier in my relationship with my wife and calling out the racism" the former actor faced from British press and social media.

The prince doesn't direct any accusations of racism towards his family in the documentary, though in March he said a relative was concerned over his son's skin color before he was born.

That allegation shook Buckingham Palace, with Prince William, Harry's brother, jumping to defend the institution: "We're very much not a racist family."