WORLD In NYC, marking 50th anniversary of Pride, no matter what

In NYC, marking 50th anniversary of Pride, no matter what

There were protests, rainbow flags and performances — it was LGBTQ Pride, after all. 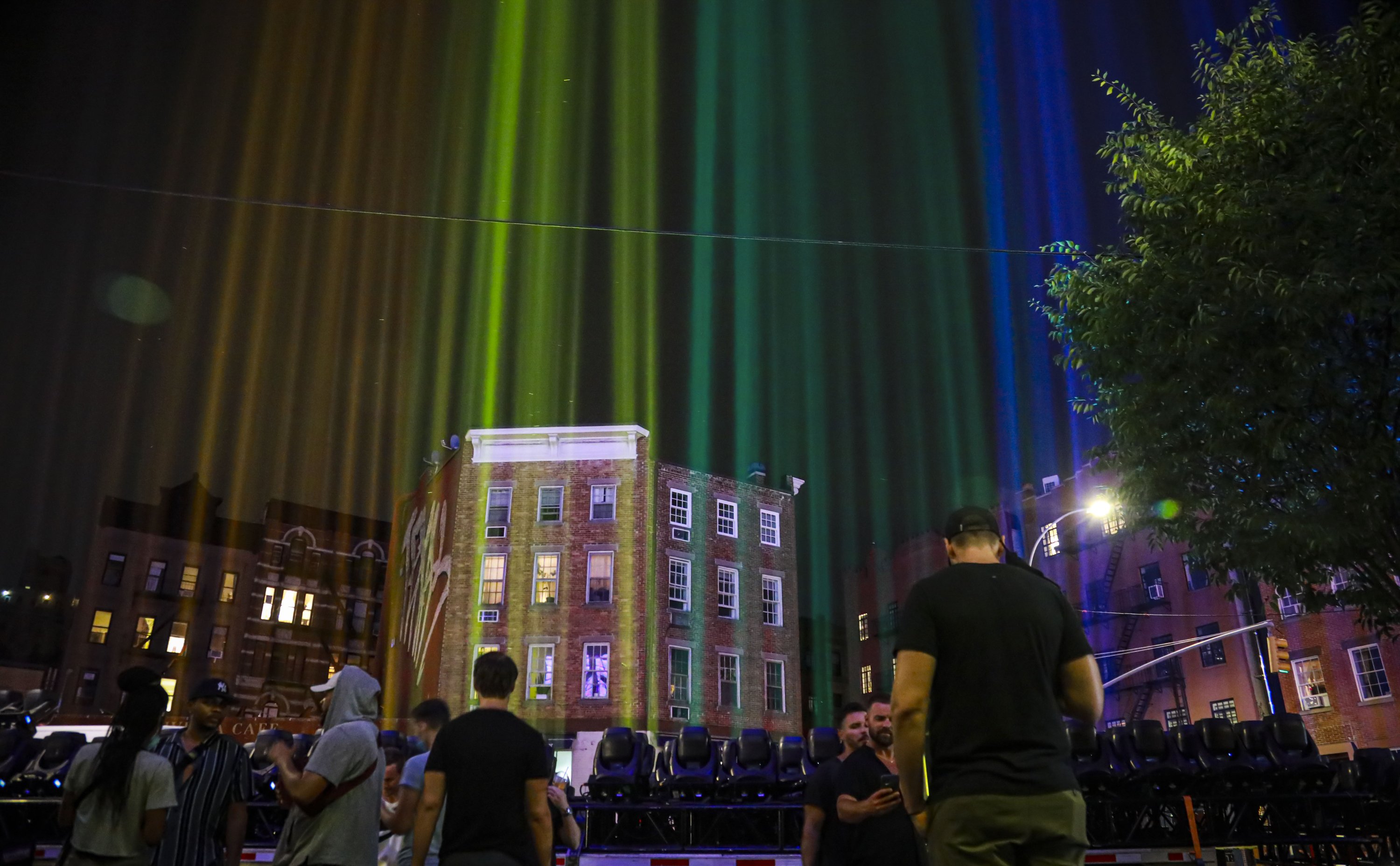 A rainbow light display illuminates the night sky in the West Village near The Stonewall Inn, birthplace of the gay rights movement, Saturday, June 27, 2020, in New York. (Photo: AP)

But what was normally an outpouring on the streets of New York City looked a little different this year, thanks to social distancing rules required by the coronavirus.

With the city's massive Pride parade canceled, Sunday's performances were virtual, the flags flew in emptier than normal spaces and the protesters were masked.

The disruption caused by the virus would be an aggravation in any year, but particularly in this one, the 50th anniversary of the first Pride march in New York City.

"It's a great thing to see because the original Pride started with the civil rights movement," Matthew Fischer said as he passed out hand sanitizer Sunday at Foley Square. "So we're really going back to the roots of that and making sure we encompass everything that empowers people to be who they are."

Fischer said it was important this year to show cooperation between the Black and LGBTQ communities, given the recent deaths of George Floyd and others that have sparked demonstrations against police brutality.

A number of people in the crowd at Foley Square held signs reading "All Black Lives Matter," with a black fist surrounded by rainbow colors. Most wore masks, though some scrapped social distancing in favor of hugging friends. One man held a sign advertising free hugs.

The first Pride march, on June 28, 1970, was a marker of the Stonewall uprisings of the year before in New York City's West Village that helped propel a global LGBTQ movement.

Initially called the Christopher Street Liberation Day March, it looked much like the protests that have streamed through the streets of New York City daily in recent weeks over racial injustice. Marchers trooped to Central Park, chanting "Gay power!" and "Gay and proud!"

The historic Stonewall Inn, known as the birthplace of the gay rights movement, furloughed its employees and has been shuttered more than three months amid the pandemic. But it announced Sunday it will receive a $250,000 contribution from the Gill Foundation — money that will go toward several months of rent and utilities.

"I don't think things will really be back to normal for us until there's a vaccine, so this is a much-needed lifeline," co-owner Stacy Lentz told The Associated Press. "It would be devastating to think about walking down Christopher Street and seeing that building shuttered."

Organizers of this year's event in New York City were determined to showcase some of that spirit, with a TV broadcast honoring the front line workers who have been so necessary in the fight against the virus as well as people and institutions of the LGBTQ community.

The show featured several performers including Janelle Monáe, Deborah Cox and Billy Porter, and appearances from a number of other celebrities.

The Queer Liberation March for Black Lives and Against Police Brutality, meanwhile, marched from Lower Manhattan toward Washington Square Park. The organizers are activists who held a protest march last year as an alternative to the main Pride parade, saying it had become too corporate.

Joseph Engargeau feared there might be no event this year because of the coronavirus restrictions. Instead, he felt this scaled-down version better resembled the first Pride than the massive event the parade became.

Engargeau, wearing a rainbow mask, said he's watched tourists through the years come to snap photos of the Stonewall, only to realize it doesn't look like anything special.

"It's just this nothing place," he said, "but it meant everything."

Other celebrations of the day were visual. At Rockefeller Center, more than 100 rainbow flags were placed around the center rink, and the plaza was lit up in rainbow colors.

In the West Village, a rainbow light art installation next to the Stonewall Inn was expected to illuminate the sky in tribute to the uprising and the original march, as well as those who have marched and fought through the years.

"The feeling doesn't go away because of the coronavirus," Mayor Bill de Blasio said in an interview with WABC-TV.

Gatherings of large groups of people are still barred in New York City as part of an effort to control the spread of the coronavirus. Other parades canceled this spring included the St. Patrick's Day parade and Puerto Rican Day parade.

Still, people have gathered by the thousands since the late-May death of George Floyd at the hands of police in Minnesota. One of the largest demonstrations was a June 14 demonstration in Brooklyn, where thousands gathered for a Black Trans Lives Matter protest.