In response to the latest remarks of Kim Jong-un, the top leader of the Democratic People's Republic of Korea (DPRK), over his possible third summit with US President Donald Trump, Washington on Saturday highlighted the progress made after the Hanoi meeting and expressed cautious expectation of the third summit. 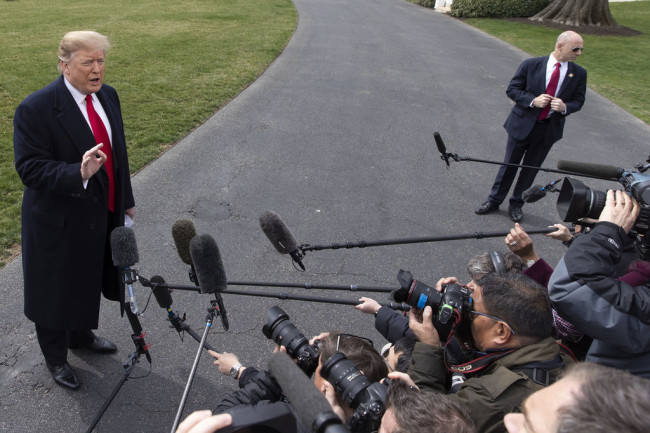 US President Donald Trump talks with reporters as he departs the White House aboard Marine One on Wednesday, March 20, 2019 in Washington, D.C. (File Photo: IC)

During his stay in Paraguay on Saturday, US Secretary of State Mike Pompeo said during a press conference that "we have work to do, but I am confident we'll continue to make progress."

"... even after Hanoi we have continued to have conversations. I am confident that what we did in Hanoi put us in a better place to continue to move forward," he said, referring to the Trump-Kim summit in Vietnam's Hanoi on Feb. 28 that ended without an agreement.

Pompeo also said later in Peru's capital city Lima that "with respect to North Korea, we made real progress in Hanoi. I am confident that the leadership in America will continue to make progress to solve this challenge of the nuclear threat that is posed to the world."

"I am very confident we'll continue to move down the path of achieving that outcome," he said, referring to the denuclearization of the Korean Peninsula.

For his part, Trump tweeted also on Saturday that, "I agree with Kim Jong Un of North Korea that our personal relationship remains very good, perhaps the term excellent would be even more accurate, and that a third Summit would be good in that we fully understand where we each stand."

Washington's remarks came after the DPRK's official Korean Central News Agency on Saturday quoted Kim as saying that he is willing to meet Trump again on certain conditions.

"It is necessary for both sides not to table their unilateral demands but find out a constructive solution to meet each other's interests," Kim said in a policy speech on Friday.

Blaming the United States for only considering its own interests during the second DPRK-US summit in Vietnam's Hanoi this February, Kim said that this has led the DPRK to question Trump's willingness to improve relations with the DPRK.

Noting that he does not accept "the American style of dialogue" which imposes the United States' unilateral demands upon its dialogue partner, the top leader said he will "wait for a bold decision" from Trump "with patience till the end of this year."

Trump said on Thursday that a third summit with Kim could happen and "it's step by step" and "not a fast process."

He also left possibility open that a three-way summit with Kim and South Korean President Moon Jae-in "could happen also," but admitted that would largely depend on Kim.

After the Hanoi summit ended, Trump told a press conference that Kim demanded relief from sanctions against Pyongyang "in their entirety" in exchange for denuclearizing a "large portion" of the DPRK's nuclear program, something the United States could not agree to.

Dismissing Trump's claim, DPRK Foreign Minister Ri Yong Ho has said that the DPRK only proposed partial removal of the sanctions, wanting those impeding the livelihood of their people to be removed first.

Earlier on Wednesday, Wu Haitao, China's deputy permanent representative to the United Nations, said for dialogue to continue and make headway, the key is to address the legitimate concerns of the parties concerned in a balanced manner, and advance denuclearization and the establishment of a peace mechanism for the peninsula by following a phased approach with synchronized steps as a package solution.