WORLD In Russia, a battle to free nearly 100 captured whales

In Russia, a battle to free nearly 100 captured whales 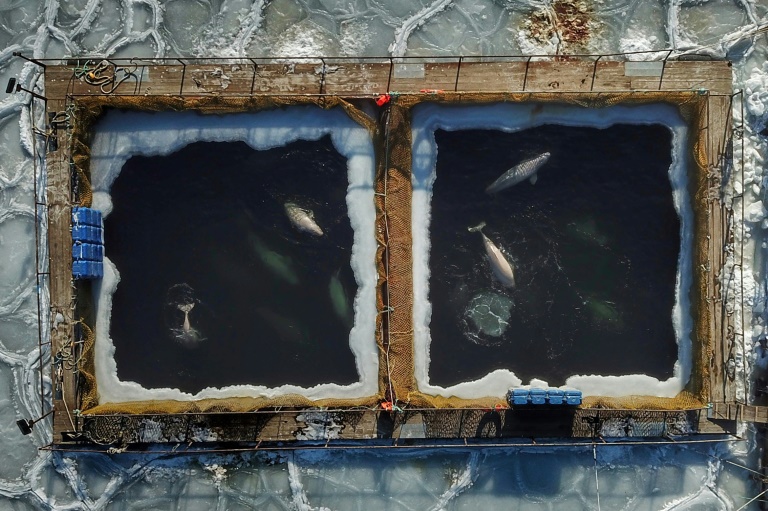 Captured marine mammals seen from above in enclosures at a holding facility in Srednyaya Bay in the Far Eastern town of Nakhodka. (Photo: AFP)

Dozens of orcas and beluga whales captured for sale to oceanariums have brought Russia's murky trade into the spotlight, but efforts to free them have been blocked by government infighting.

Russia is the only country where orcas, or killer whales, and belugas can be caught in the ocean for the purpose of "education". The legal loophole has been used to export them to satisfy demand in China's growing network of ocean theme parks.

Photos of a total of 11 orcas and 87 belugas crammed into small enclosures at a secure facility in the Far Eastern town of Nakhodka sparked a global outcry, and the Kremlin on Friday stepped in, saying the fate of "suffering" animals must be resolved.

"There have never been that many animals caught in one season and kept in one facility before anywhere in the world," said Dmitry Lisitsyn, head of the Sakhalin Environmental Watch group, who has emerged as a point person in the campaign to release the whales captured last summer back into the wild.

Russian investigators launched two probes into poaching and animal cruelty, while Russia's environmental watchdog said it has refused to issue permits to export the whales.

But the investigations and any potential court case could drag on for months.

The Russian government is split between the environment ministry that says the animals must be released, and the fisheries agency that defends their capture as part of a legitimate industry.

President Vladimir Putin has ordered his ministers to "decide on the fate of the whales" by March 1, a decree said Friday.

"The animals are suffering" and may die, said Kremlin spokesman Dmitry Peskov, adding that they "are being kept in conditions that are inadequate for such young animals of these species."

The captured killer whales belong to the rarer seal-eating population of the species, which does not interbreed or interact with fish-eating orcas.

"This population has only 200 adult animals" in Russian waters, she said.

But the agriculture ministry, which controls the fisheries agency and oversees non-protected sea species, views orcas as competitors for Russia's fish stocks and doesn't believe they are under threat, Krever said, calling the dispute a "big problem."

Marine mammal researchers say there are good chances of a successful release, but the fisheries agency told AFP that it "carries high risks of their mass death".

"Neither orcas nor belugas are endangered," and are simply a resource that can be used according to existing legislation, agency representative Sergei Golovinov said.

'Stars of the shows'

Both the United States and Canada stopped catching wild orcas in the 1970s due to negative publicity, so China relies on Russian exports.

There are 74 operational ocean theme parks in mainland China featuring whales and dolphins, according to the China Cetacean Alliance, which monitors the industry. More are under construction.

"Orcas are like the cherry on the cake" for new Chinese venues, said Greenpeace Russia campaigner Oganes Targulyan at a recent protest against whale capture.

"They are the stars of the shows."

All 17 killer whales that Russia has exported since 2013 -- which officials value at up to $6 million each -- have gone to China, according to CITES wildlife trade figures.

Though the animals in Nakhodka are unlikely to get green-lighted for export, their fate is unclear.

The urgency of the situation is clear however: one killer whale went missing from the Nakhodka facility this week, Sakhalin Watch said Thursday, suspecting it may be dead.

In the West, there is widespread opposition to keeping the highly intelligent marine mammals in parks like the US chain Sea World, but in Russia public opinion is not so certain.

Companies that caught the animals are not giving up. At the weekend, they launched a new Instagram account, praising the Nakhodka facility and defending the oceanarium industry.

On Saturday, dozens of pro-industry supporters disrupted a rally to free the whales. They showed up with signs reading "Each orca is 10 jobs" for the crews hired to catch them, and only left when police arrived on the scene.

"We see that the capturing companies are putting up a fight," Lisitsyn said. "They are using their lobbyist muscle."

Researchers meanwhile are already starting to organise to prepare for a potential release of the animals.

"There has never been so many animals released in the past," said Dmitry Glazov, a beluga whale researcher at the Severtsov Institute of Ecology and Evolution in Moscow.

He said a project of that scale would certainly require international expertise and funding. The whales, which have been fed dead fish, would need to go through an adaptation period to make sure they can rely on their natural food sources.

"For science, releasing this many animals would be invaluable," he said. "But there needs to be a decision first."