WORLD In Syrian riverside camp, IS clings to last scrap of 'caliphate'

In Syrian riverside camp, IS clings to last scrap of 'caliphate' 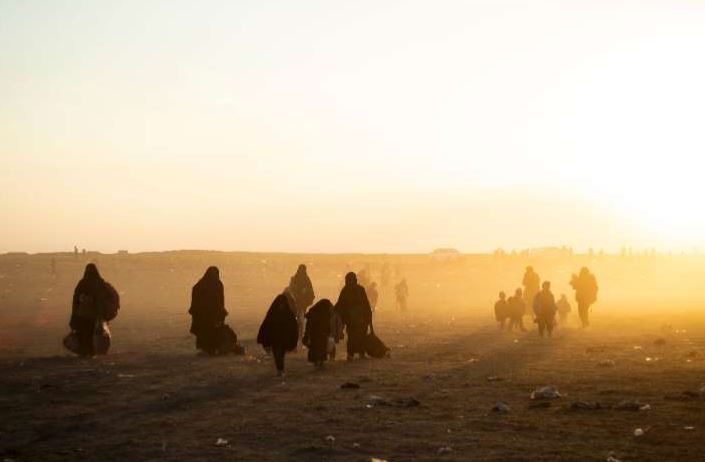 Thousands of men, women and children have streamed out of the Islamic State group's embattled holdout of Baghouz in eastern Syria in recent days. (Photo: AFP)

Holdout Islamic State group fighters hunkered down in a riverside camp in eastern Syria Friday as US-backed forces pressed to expel them from the last scrap of their dying "caliphate".

Thousands of men, women and children have poured out of the pocket of territory in the village of Baghouz near the Iraqi in recent days, their wounded and dust-covered children in tow.

The extremist group created a proto-state across large parts of Syria and Iraq in 2014, ruling millions of people, but has since lost all of it except a tiny patch in Baghouz by the Euphrates River.

The last IS fighters and their families were cornered on Friday among a dense gathering of vehicles and tents on the water's edge, caught between advancing US-backed forces and Syrian regime fighters across the river.

Men and women draped in black walked between a sea of small pickup trucks and canvas scattered across the uneven riverbank, footage obtained by AFP showed.

Amid the haphazard dwellings, a black cow grazed on a patch of dry grass.

The images, filmed by the Free Burma Rangers aid group, showed a motorbike darting between an dark earth berm topped with clumps of reeds and a line of makeshift shelters.

Just a few metres from the river, a few figures sat behind a wall of breeze-blocks erected among a thick bed of reeds, shielding them from the other side of the waterway.

The Syrian Democratic Forces, who are backed by air strikes by the US-led coalition against IS, are waiting for all civilians to be evacuated before moving in to retake the last scrap of IS-held territory.

More than 7,000 people, mostly women and children, have left the enclave this week, into territory held by the Kurdish-led SDF.

On Thursday, AFP saw dozens of women and children at a screening point for new arrivals outside Baghouz.

An woman dressed from head to toe in black sat slumped on a wheelchair, with other women and children wrapped in thick jackets scattered on blankets at her feet.

All around, women and children sat together in groups under a cloud of churned-up orange dust.

Near a field of yellow flowers, two SDF soldiers carried a man with a long beard on a wooden stretcher.

He was the latest wounded man to emerge from the dregs of the "caliphate", after a stream of men limping out on crutches a day earlier.

Around a tenth of the nearly 58,000 people who have fled the last IS bastion since December were jihadists, according to the Syrian Observatory for Human Rights, a Britain-based war monitor.

It is unclear how many people remain inside, but the SDF has been surprised by the large numbers streaming out in recent days.

At the height of its rule, IS imposed its brutal interpretation of Islam across an area the size of the United Kingdom.

After it lost major cities in both countries in 2017, the fall of Baghouz would be a symbolic end to its territorial control.

Aid groups have said that children who have fled Baghouz are "victims of the conflict" who must be protected. (Photo: AFP)

But General Joseph Votel, head of the US Central Command, warned Thursday that many of those being evacuated are "unrepentant, unbroken and radicalised", calling for a "vigilant offensive" against the group.

He told Congress the fight against IS was "far from over", and stressed the need to "maintain a vigilant offensive against this now widely dispersed and disaggregated organisation".

Beyond Baghouz, IS fighters are still present in Syria's vast Badia desert and have claimed deadly attacks in SDF-held territory, including one that killed four Americans in the city of Manbij in January.

US President Trump stunned allies in December when he announced all 2,000 US troops would withdraw from Syria as IS had been defeated.

The White House later said that around 200 American "peace-keeping" soldiers would remain in northern Syria.

The SDF is holding detained jihadists in jail, while civilians are being trucked north to Kurdish-held displacement camps hours north.

Syria's Kurds have detained hundreds of foreigners accused of fighting for IS, as well as family members, but their home nations have been reluctant to take them back.

Baghouz is currently the only active front in Syria's eight-year civil war, the latest battle in a complex, devastating conflict that has killed more than 360,000 people and displaced millions from their homes.