In Ukraine, the latest Covid surge is attacking more children

Three-month-old Misha has spent 10 days in a Kiev paediatric hospital -- including three in intensive care -- due to pneumonia triggered by Covid-19. 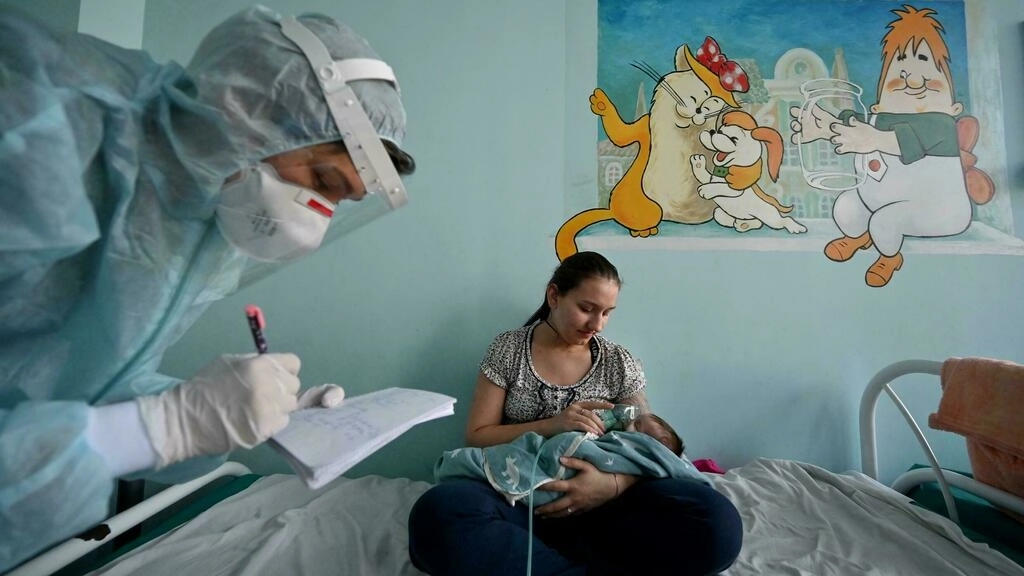 He is one of an influx of young patients to the infectious diseases hospital in Ukraine's capital, which has seen the coronavirus pandemic hit children much harder in recent months.

Fixing an oxygen mask on her son, the 29-year-old adds that she has lost seven kilogrammes (15 pounds) due to anxiety since he fell ill.

"In the spring, each patient needed 10 litres of oxygen per minute on average", but now "it's 60 litres per minute", says Alina Riazanskykh, the 32-year-old head of the intensive care unit.

The latest wave has already brought the first Covid deaths in the hospital since Ukraine's outbreak began in spring 2020: two babies and a disabled eight-year-old boy.

One of Europe's poorest countries, ex-Soviet Ukraine has been hit hard by the latest wave of coronavirus infections driven by the Delta variant, which is more contagious and dangerous for children.

On Thursday, the country of around 40 million people recorded 752 new deaths from the virus over 24 hours -- the third-highest toll in the world after the United States and Russia.

A low vaccination rate has worsened the outbreak in Ukraine, where people are hesitant to get a jab despite repeated calls from the authorities and four available vaccines -- Pfizer, Moderna, AstraZeneca and Chinese-made Coronavac.

While the vaccination drive has accelerated in recent weeks after authorities imposed restrictions on the unvaccinated entering public places, less than a third of adult Ukrainians were fully vaccinated as of Thursday.

Faced with a jab-sceptic population, President Volodymyr Zelensky announced this week payments of around 35 euros ($40) to everyone who is fully vaccinated.

The initiative has been denounced as "populist" by Zelensky's opponents, but 49-year-old infectious disease doctor Vitaliy Yevtushenko sees it as "a normal practice" and pleads for children to be vaccinated as well.

Ukraine last month authorised minors aged from 12 to 17 to be able to get the Pfizer jab.

So far only some 30,000 young people have received at least one dose, the health ministry told AFP.

Like many other mothers of hospitalised children, Sasha Voytenko, 23, plans to be vaccinated "quickly" after she leaves the hospital with her one-month-old daughter.

But many Ukrainians are against doing so -- sometimes even those whose children are infected with the virus.

Oksana Potapchuk -- who herself is vaccinated -- has spent three days in hospital with her 8-year-old son Roman, who is fed up with wearing his oxygen mask and taking endless blood tests.

But Potapchuk is against her 12-year-old daughter getting the jab.

"I have not seen reliable studies on these vaccines," the 32-year-old manicurist says.

Liliya Gorodskykh, whose 2-year-old son is in intensive care suffering from pleurisy, is among the few who plan to vaccinate their children.

"We will likely vaccinate him" if he becomes eligible, said the 27-year-old teacher, comforting her crying boy.

To curb the spread of the virus among children, Kiev authorities ordered the closure of schools in early November, in a move that angered many parents.

Medical workers, however, support the decision.

"We feel the effect," says doctor Riazanskykh, whose unit now has only one patient out of six beds -- all of which were occupied just last week.

But with schools reopening Monday, the break may have been limited.

"We'll see what happens in a week," Tetyana Kaminska said. "There will most likely be another outbreak."