WORLD In UN building, Trump sees a real estate deal that got away

In UN building, Trump sees a real estate deal that got away 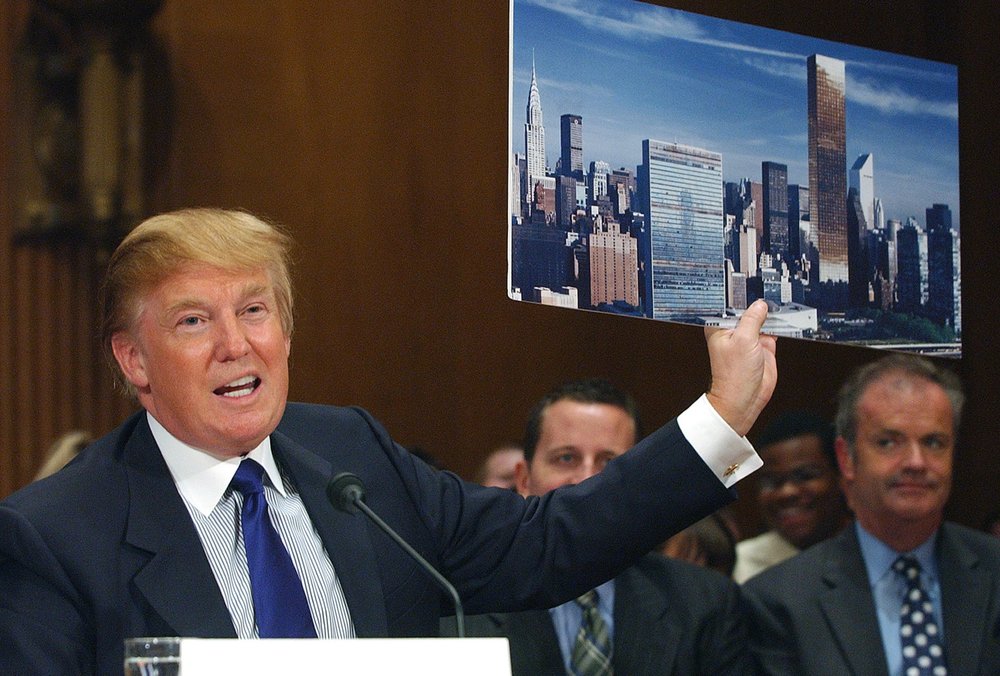 In this July 21, 2005, file photo, Donald Trump holds a picture of the New York City skyline while testifying on the renovation of the United Nations Headquarters on Capitol Hill. (Photo: AP)

As US President Donald Trump visits the United Nations building in New York this week, he won’t be focused only on the global challenges facing the world body — he’s still reliving the real estate deal there that got away.

More than a decade later, Trump vividly recalls the overtures he made to rebuild the 39-story tower in the early 2000s and posits that he could have done a better job with the $2.3 billion projects, which took about three years longer than anticipated and came in more than $400 million over budget.

In the leadup to this week’s UN General Assembly meetings, the president reminisced with reporters on Air Force One this past week about his efforts to win the project.

“I offered to rebuild it at a tiny fraction of what they were going to build it for,” he said.

He appealed to the panel to let him manage the project. He would even waive his fee, he said. In the end, he didn’t get the project, but his words were music to senators concerned about costs.

“When can you start?” said one appreciative lawmaker, Sen. Mark Dayton, D-Minn., who went on to serve as the state’s governor for two terms.

Trump is scheduled to speak to the UN General Assembly on Tuesday. He was asked if he’ll think back to his real estate days when he returns to the UN compound. It sounded like he certainly would.

“I was a very good real estate developer,” he reminisced. He added that he had correctly predicted “It will end up being much more” than expected.

“They didn’t even know what New York steam was versus a boiler,” he said of the developers. “They knew nothing.”

Trump said an ambassador, he believed from Sweden, contacted him to ask how he could have built Trump World Tower, right across the street from the UN compound, for far less than what was envisioned for the smaller UN headquarters.

“I said, ‘Because I know how the game is played,’” Trump recalled.

Trump said he could have completed the project for about $500 million. He would have used marble instead of terrazzo, which is much more expensive, he recalled.

The UN compound was largely built between 1949 and 1952. Over time, it no longer conformed to safety and fire codes, or to security needs. The US provided about $488 million to help pay for the renovations, according to a 2015 Government Accountability Office report.

Trump clearly got a kick out of rehashing the episode. It gave him one more chance to relive his developer days.

“It would have been a great job,” he declared.