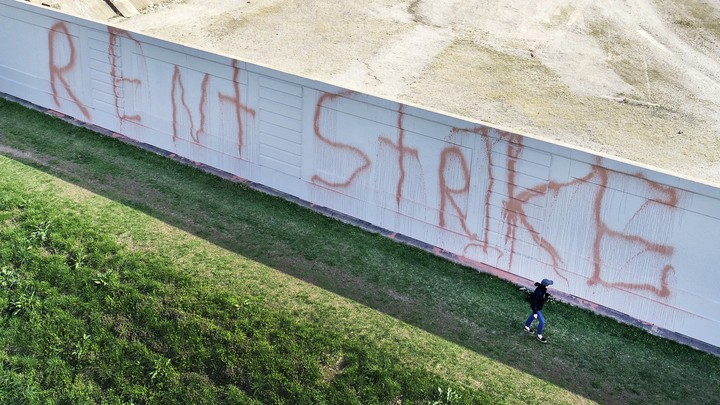 Without a job and terrified of being left homeless during the coronavirus pandemic, Manuel Acero had no other option but to enlist in the US Army.

His distraught wife Ady Carrillo stayed behind in the studio apartment they rented in Los Angeles, but the 48-year-old isn't just awaiting his return home -- she's taking action.

Carrillo has joined the "Cancel Rent" movement, which is gathering steam with protests across the United States as Americans hit hard by the coronavirus pandemic pile up debts.

Activists want landlords to suspend rent obligations for those in the most dire straits, having lost their jobs in the economic chaos sparked by the virus crisis.

Like the 31-year-old Acero, who is now at boot camp, many have been forced to resort to extreme measures.

"It's been three months since we were able to make rent -- the only choice my husband had left was to join the army," Carrillo told AFP, bursting into tears.

"I'm scared they'll send him away from me" on an overseas deployment, she said. "If he dies, I die with him."

With tens of millions of Americans out of work because of the pandemic, federal, state and local authorities temporarily suspended evictions on tenants who cannot make rent.

But many worry about what happens when those concessions run out.

Over the past week, the Los Angeles County Sheriff's Department has resumed evictions ordered before March when the lockdowns began, local media have reported.

In the city's Chinatown neighborhood on Monday, a small group of protesters including Carrillo rallied and marched on City Hall, demanding answers.

Los Angeles has the sixth-highest rents in the country, according to a ranking by the real estate site Zumper, trailing behind cities like San Francisco and New York.

"It's been so hard for me to make rent during the pandemic," said Rosa Hernandez, who also attended Monday's rally.

Demonstrations and "rent strikes" by the "Cancel Rent" movement have been staged in various cities across the country since the start of the virus epidemic, which has so far left more than 164,000 Americans dead.

"We are not going to pay," said Lydia Nicholson, an organizer of the LA Tenants Union.

"I don't think it's going to be pretty at all for anyone if they make us do something that we just obviously can't do."

Los Angeles prosecutors have said large-scale rent forgiveness is out of the question, and would cost the city more than $1 billion in compensation to landlords, according to a memo seen by the Los Angeles Times.

Mayor Eric Garcetti's office did not respond to an AFP request for comment for this story.

For their part, landlords say freezing rents would not only affect the upkeep of their properties but would also impact the payment of taxes, which are key to the city budget, as well as mortgages.

Suspending rent payments is "just shifting the debt up the food chain," said Jay Martin, director of a group that represents owners of rent-controlled properties in New York.

He said that many landlords "are working with [tenants], they are forgiving parts of the rent."

"A tenant that can pay partial rent is better than a tenant who can pay no rent," Martin said.

But the situation only appears set to get worse as federal supplementary support of $600 a week for the unemployed has now expired.

"I'll have to go sleep under a bridge," said Joaquin Gutierrez, 63 who has been out of work since February.

Gutierrez had been planning on returning to his native El Salvador when the coronavirus broke out and left him stranded in the United States.

Now, he does not have money to buy food, much less the $500 needed to pay the rent on his room in LA's Van Nuys neighborhood.

"The only solution is for me to leave," Gutierrez said, calling on the government of El Salvador to repatriate him.