'Gravely endangered of US'

The impeachment text -- signed by at least 180 members of Congress so far, according to Democratic congressman Ted Lieu -- laid blame squarely at the president's feet.

"In all of this, President Trump gravely endangered the security of the United States and its institutions of government. He threatened the integrity of the democratic system, interfered with the peaceful transition of power, and imperiled a coordinate branch of government," it reads.

Trump, who had urged his supporters to come to Washington on Wednesday for a rally opposing his November election loss, has remained defiant, even after finally posting a video Thursday in which he belatedly promised an "orderly transition" to the Biden administration.

But the president also said that "it's only the beginning of our fight."

That sort of language prompted Twitter to suspend Trump permanently on Friday and fueled Democrats' moves against him.

The Twitter ban drew an angry response from Trump, who in a statement late Friday accused the popular platform -- where he had more than 88 million followers -- of having "coordinated with the Democrats and the Radical Left."

Twitter not only suspended the @realDonaldTrump account but took action against others, including @POTUS, when he briefly turned to them. 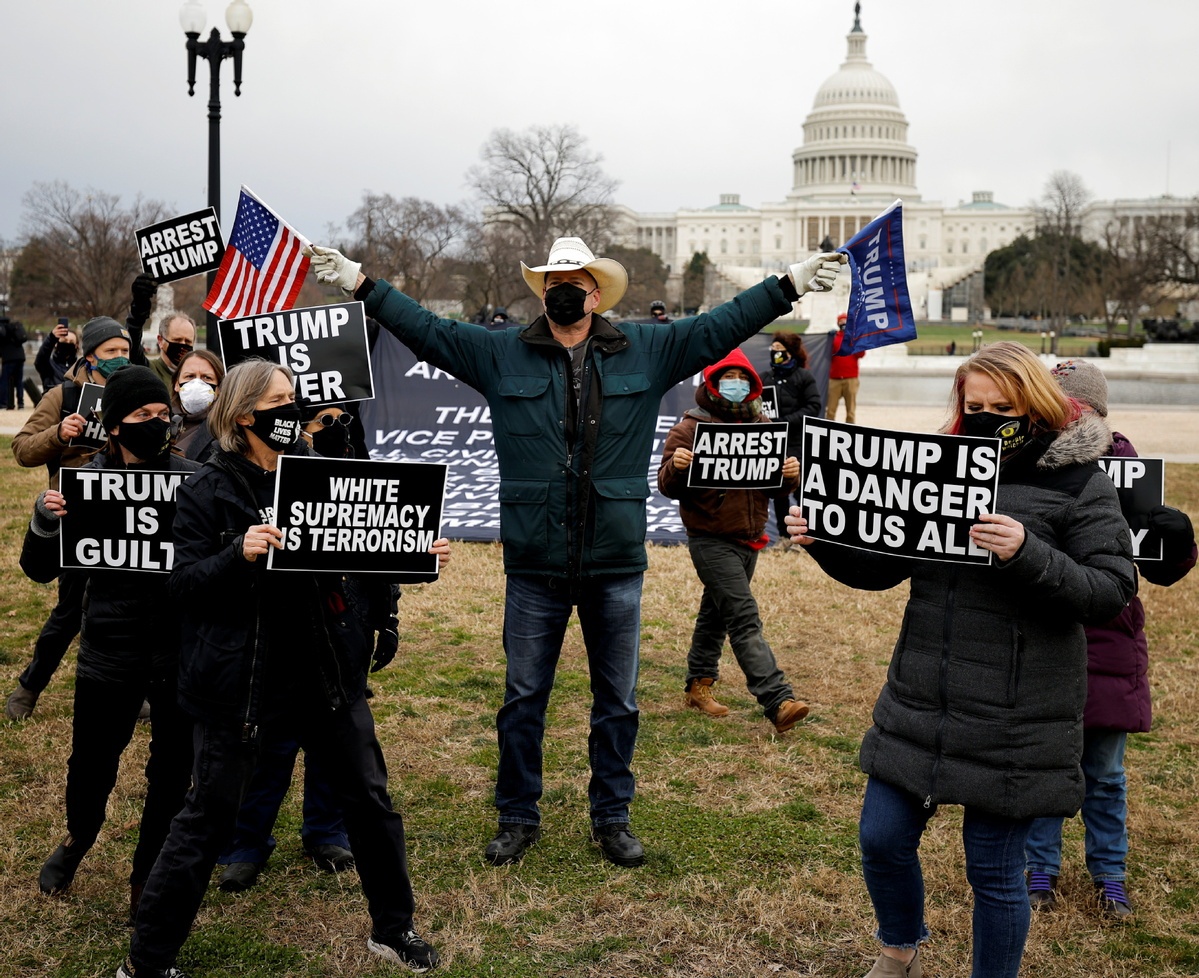 A Trump supporter waves an American and Trump 2020 campaign flags amid anti-Trump demonstrators during competing protests near the US Capitol days after supporters of US President Donald Trump stormed the Capitol building in Washington, on Jan 8, 2021. [Photo/Agencies]

WASHINGTON - US Democrats on Saturday were readying for an unprecedented second impeachment of Donald Trump as the defiant president showed no signs of stepping down after the deadly violence at the Capitol.

Democrats said impeachment proceedings could begin as early as Monday -- an extraordinary acceleration of a process that historically has taken weeks, but one that might not be completed before President-elect Joe Biden is sworn into office on January 20.

House Speaker Nancy Pelosi warned that Democrats will launch the process unless Trump resigns or Vice President Mike Pence invokes the 25th Amendment, where the cabinet removes the president.

"He's deranged, unhinged and dangerous. He must go," Pelosi, referring to Trump, tweeted on Friday.

The move to impeach came amid continued fury over the storming of the Capitol on Wednesday by angry Trump supporters, which left five people dead, including a Capitol policeman.

Authorities announced new arrests and charges Saturday over the incursion, including a tattoo-chested man in a horned headdress whose image was beamed around the world.

That man, Jacob Anthony Chansley, also known as Jake Angeli, and two others -- one of them a newly elected state official from West Virginia -- were charged in federal court in connection with the violence, according to the US attorney's office for the District of Columbia.

Several Democrats and at least one Republican lawmaker -- Senator Lisa Murkowski of Alaska -- have urged Trump to resign and avoid the messiness of impeachment proceedings in his final full week in power, but he reportedly has remained defiant in talks with his aides.

Trump has said he never intended for his supporters to attack the Capitol building -- where Congress had convened to certify Biden's victory in the state-by-state Electoral College tally -- but only meant to encourage peaceful protest.

But in the chaos, one Trump supporter was shot and killed, while a Capitol policeman was gravely wounded and died the following day.

Lawmakers, reporters and staff were forced to take shelter while invaders looted and vandalized the historic building, some parading through its halls with Confederate flags.

Just as when Trump was impeached in a traumatic 2019 partisan vote -- but not convicted -- the process requires first majority backing in the Democratic-controlled House of Representatives, and then, for conviction, two-thirds approval in the Senate.

Reaching two-thirds could be difficult in the narrowly divided upper chamber, though a number of Republicans have expressed their disgust with the events of Wednesday.

"I do think the president committed impeachable offences," said Senator Pat Toomey in an interview on Fox News on Saturday.

But Trump supporters including Senator Lindsey Graham have urged Biden to intervene with top Democratic lawmakers to call off the impeachment effort.

"I'm calling on President-elect Biden to pick up the phone to call Nancy Pelosi and the Squad to end the second impeachment," Graham said Friday on Fox News, referring to the House speaker and a group of four young progressive Democrats who are favorite targets of the political right.

But Biden -- whose inauguration on January 20, traditionally a pomp-filled event attended by thousands, is being seriously scaled back -- on Friday side-stepped a reporter's question about impeachment.

"What the Congress decides to do is for them to do," he said.