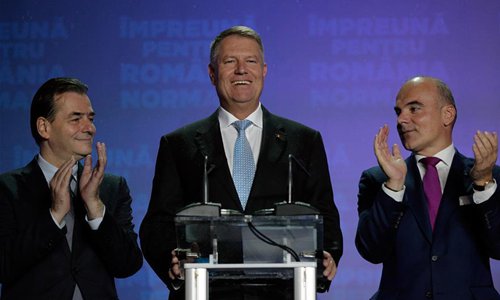 Exit polls showed that incumbent Romanian President Klaus Iohannis is ahead of other candidates in the first round of presidential elections on Sunday, gaining 39 percent of the votes.

Iohannis' main political rivals, Social Democrat leader Viorica Dancila came second with 22.5 percent, while leader of the Save Romania Union Dan Barna got 16.4 percent, according to the exit polls jointly carried out by local pollsters CURS and Avangarde.

The other 11 candidates had far fewer votes, with the fourth place candidate winning less than 8 percent.

The margin for error of the exit polls is 2.5 percent, CURS-Avangarde representatives claimed. Over 18.2 million voters are eligible to cast their ballots.

"This is a huge step for Romania," said Iohannis following the announcement of the exit polls.

Dancila, who, according to exit polls, qualified for the runoff of the presidential elections, said that the vote on Sunday helped her party to continue the election campaign and to demonstrate what it wants to do for Romanians.

Save Romania Union leader Dan Barna said that the final score is not given by the exit polls, but by "the counting of votes," voicing his optimism about the final result of Sunday's vote.

The official final results of Sunday's elections were expected to come out on Wednesday.

If none of the candidates secures a majority of votes, a second round will be held two weeks later between the top two candidates of the first round and the election will be decided by simple majority.

Local analysts believe that the incumbent president should have no problem entering the second round of elections, and his opponent will be one of the two candidates who trailed behind him in Sunday's voting.

According to them, the advantage of 6.1 percentage points of Dancila over Barna does not guarantee the former's qualifying in the runoff, as diaspora voting was not included in the exit polls and Barna has a higher support among overseas voters.

Thus, it is not clear who can enter the second round of elections and compete for the presidential position with the current president, they said.