WORLD Independence not on ballot but on voters’ minds in Scotland

Independence not on ballot but on voters’ minds in Scotland 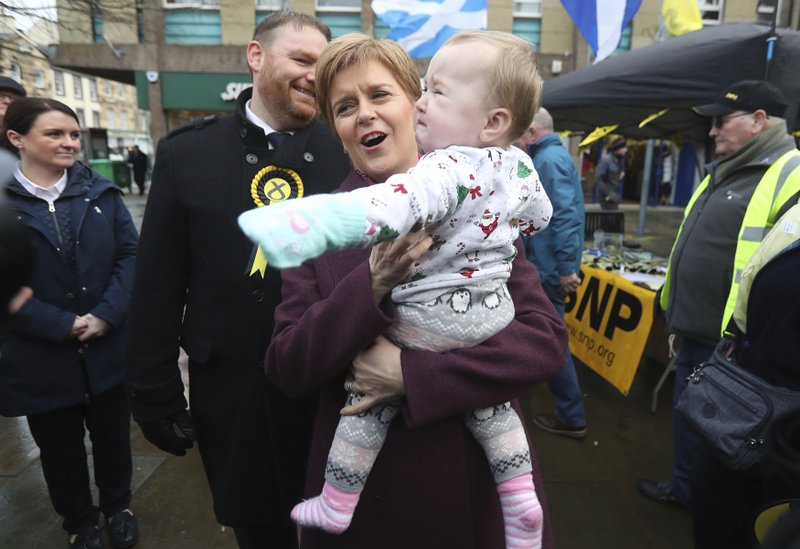 Ask voters in this picturesque university town in eastern Scotland how they’re voting in next week’s election, and they’re likely to transition seamlessly from talking about which candidate they want to send to Parliament to discussing whether or not they want another bite at voting for Scottish independence, which voters rejected in 2014.

The question of Scotland’s independence from the rest of the United Kingdom is not on the ballot, but it’s uppermost in the minds of many voters in St. Andrews, and elsewhere in Scotland, as they make their final choices.

That’s because the decision to take the United Kingdom out of the European Union — known as Brexit — has upended the political landscape and exposed old divisions among England, Scotland, Wales and Northern Ireland, fraying the ties that bind the UK In Scotland, that means talk of independence. In Northern Ireland, it means fears that the sectarian violence that plagued it for decades could return.

These issues, and Brexit itself, are just below the surface in the Dec. 12 general election. Rarely has an election been so fraught with implications for the future of the United Kingdom, a structure often taken for granted because of its familiar symbols — the queen who has reigned for more than six decades, the Parliament that is centuries old — but is vulnerable as it engineers a radical change in its relations with the rest of Europe.

Voters in Scotland overwhelmingly chose to remain in the EU in the 2016 referendum, so it’s fair to say Scotland is being dragged through Brexit against its will.

The North East Fife district that is home to St. Andrews was the tightest in the United Kingdom’s last general election — only two votes meant victory for the Scottish National Party over the Liberal Democrats in 2017 — and the foes are grappling again. While they are united in their rejection of Brexit, they are divided over whether Scotland should vote, again, on its own independence.

The Scottish Nationalists say yes, that Brexit is so dire it merits another vote on whether Scotland, an economic player in its own right, blessed with ample energy resources, natural beauty, and a rich tradition of self-sufficiency, should forge its own way as an independent nation. The Liberals, meanwhile, remain committed to remaining inside the UK, even if Britain extricates itself from the European Union as scheduled on Jan. 31.

Retired boxer Chris Honess has no doubt where he stands: He’s going to vote against the Scottish Nationalists with the hope of quelling talk of another independence referendum. He thinks the whole structure of European defense would be threatened if Scotland breaks away.

“I am 100% against the breakup of the United Kingdom,” said Honess, 69. “I think we’re very good at complaining, actually the UK works very, very well. If the SNP (Scottish Nationalist Party) were to succeed in breaking up the United Kingdom that would definitely weaken NATO, and I’m a huge supporter of NATO.”

If no party gets an outright majority in the upcoming vote, SNP leader Nicola Sturgeon had made clear that any party looking for her backing in a coalition government will have to agree to authorize Scotland to hold another independence referendum — and to accept the results.

John Curtice, a professor of politics at the University of Strathclyde, said the debate over independence and Brexit are now closely “interlaced” in Scotland. He says the results in North East Fife and many Scottish districts in the coming election are extremely hard to predict.

It’s not just in Scotland. In Northern Ireland, some believe the election, if it brings the current Brexit deal to reality, could nudge Northern Ireland away from the UK and closer to the Republic of Ireland. That’s a fraught issue.

The current Brexit plan, which is expected to win swift approval if Prime Minister Boris Johnson’s Conservatives win a majority, would keep Northern Ireland bound more closely to EU trade rules than the rest of the UK in order to avoid border checks with EU member Ireland. That, in turn, could mean new checks on trade between Northern Ireland and other parts of the UK.

Some who fervently want — or fear— a united Ireland believe that might be a fateful first step toward that end. And any changes, even small ones, to the delicate balance that defines Northern Ireland’s status could have big consequences.

Back in Scotland, heavily tattooed hairstylist Craig Boyd, who runs a small salon, says he’s backing the Scottish Nationalists next week with hopes of getting a chance to vote on independence again. He says that’s far more important to him than the Brexit issue.

“I voted for independence the first time around, and I’ll vote for it the second time around,” he said. “Whether that is under remaining in the (European) single market and the union, who knows? But either way I’d like to see independence for Scotland.”

But Johnnie Balfour, whose family has operated Balbirnie Farm since 1642, is tired of all the back and forth over independence. He remembers that voters were told ahead of the 2014 vote that this was a “once in a generation” decision — he doesn’t want to revisit it just five years later.

“It’s another form of uncertainty,” he said. “The fact that we are still going on about it…. Let’s run this country in the way that we voted to do it in 2014 and let’s not muck about anymore.”