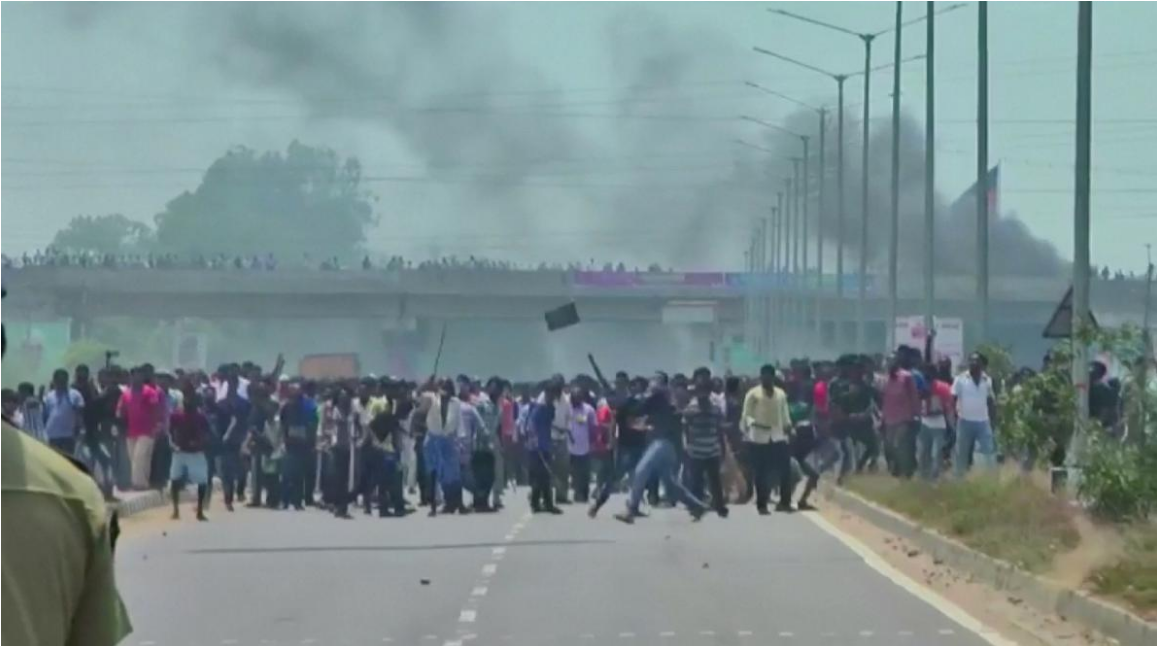 People pelt stones during a protest against the construction of a copper smelter by Vedanta Resources from the road, in Thoothukudi, Tamil Nadu, India in this still image from May 22, 2018 video footage. Video taken May 22, 2018. (Photo: Reuters)

One person died and others were wounded by gunfire in southern India on Wednesday in fresh violence related to protesters’ demands that a copper smelter be shut on environmental grounds. The day before at least ten people were killed by police during a mass demonstration against the plant.

As the struggle continued on the streets of the port city of Thoothukudi, located at the tip of the subcontinent in Tamil Nadu state, an Indian court ordered a halt, at least for a few months, to plans to double the size of the plant. The Vedanta Resources-run smelter is already one of the two biggest in the country.

The Madras High Court told authorities to hold a “mandatory” public hearing over Vedanta’s application for environmental clearance and said a decision on environmental approval would be looked into by “appropriate authorities”.

“One person was brought dead today, and up to eight cases of injuries due to gun shot are undergoing treatment,” said a doctor in charge of the casualty ward at Thoothukudi government hospital.

It was not immediately clear if the dead person and the injured were protesters who had been shot by police.

Two policemen were also injured, doctors at the hospital said, adding that all injured were stable.

There had been instances of sporadic violence earlier on Wednesday, officials said.

“The situation is tense, but under control,” said an official at the Thoothukudi police control room, who did not wish to be named as he was not authorized to speak to the media.

Multiple doctors working in the casualty and accident ward alleged that stones were pelted at the medical team, and a senior doctor was manhandled. They blamed protesters.

Shops and ATM were shut and vehicles stayed off the roads on Wednesday amid patrolling by police vans. Charred vehicles could still be seen on the deserted roads with hundreds of policemen stationed outside the government hospital.

The city’s Eral Bazaar, which is usually bustling with economic activity on a regular day, was almost deserted late evening.

The plan by the London-listed firm to double the capacity of the smelter to 800,000 tonnes ignited the demonstrations and prompted activists to petition the court to intervene.

“Vedanta shall cease construction and all other activities on-site proposed Unit-II of the Copper Smelting Plant at Tuticorin (Thoothukudi) with immediate effect,” the order from the Madras high court said.

The plant has already been shut for more than 50 days and will remain closed until at least June 6 because the local pollution regulator has said the facility is not complying with environmental rules.

Residents of the city and activists say emissions from the smelter are polluting the air and the water, affecting the health of residents and pose a risk to fisheries.

“Truth and reasoning have prevailed,” said Fatima Babu, who had petitioned the court.

On Tuesday, protesters set vehicles on fire and threw stones at police as they stormed the district government headquarters and an apartment block for Vedanta employees, the police and a company official said.

Police said they opened fire to control the situation.

Vedanta says the protests were based on “false allegations”.

“We are shocked and saddened to hear about the incident and we are working with the relevant authorities to ensure the safety of our employees, facilities and the surrounding community,” said Kuldip Kaura, CEO of Vedanta Resources during a call with reporters.

A Vedanta official said a majority of the employees from the copper smelter have been moved out of Thoothukudi to keep them safe.

Vedanta shares were down 7.3 percent in London trading as of 1300 GMT.

“Copper contributes almost 7-8 percent to the consolidated operating profit and as much as 30 rupees (44 cents) to the share price, therefore it definitely hurts the company’s numbers,” said Goutam Chakraborty, analyst with Emkay Global.

The shutdown of the smelter could lead to higher imports of copper into the country and benefit rival Hindalco Industries Ltd , said securities analysts.

India consumes close to 1.5 million tonnes of copper a year, of which almost 50 percent in imported into the country. Vedanta and Hindalco provide almost all of the rest between them.