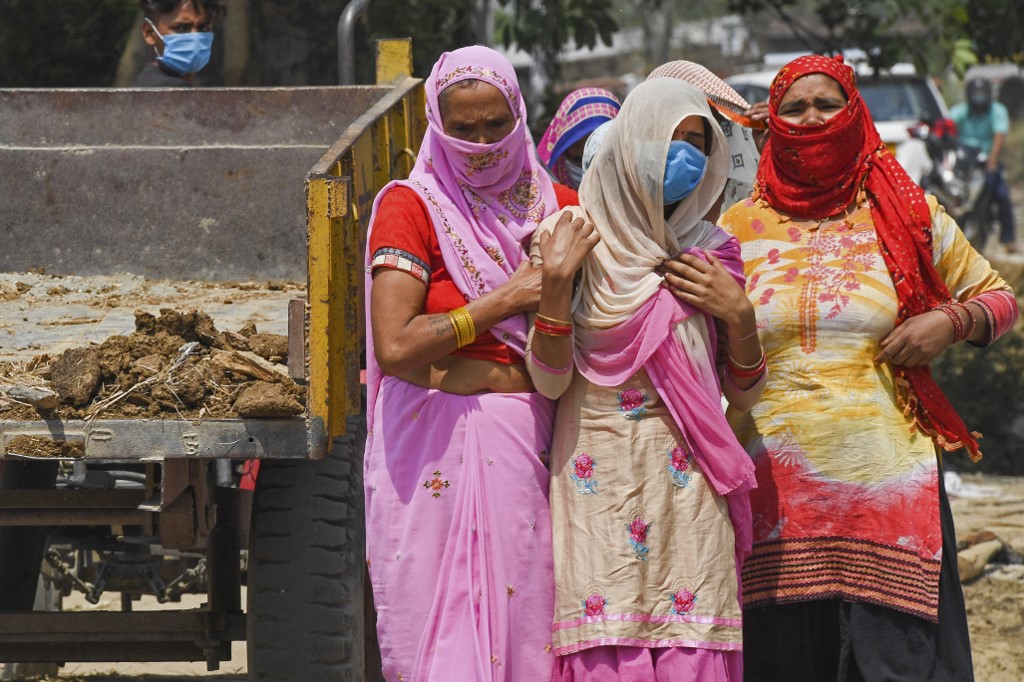 In this picture taken on May 5, 2021, relatives grieve as they arrive for the cremation of their loved one who died due to the Covid-19 coronavirus at a crematorium in Moradabad, India. (Photo: AFP)

India recorded more than 4,000 coronavirus deaths in a day for the first time, the government said Saturday.

Experts, who have expressed doubts about the official death toll, say India may not hit a peak in its current surge until the end of May.

While the situation in major cities New Delhi and Mumbai is now stabilising, with extra supplies of oxygen being sent and new hospital beds opened up, coronavirus is now spreading fast in southern states and rural areas.

Karnataka, which includes the major IT hub of Bangalore, has ordered a statewide two-week lockdown from Monday in a bid to halt the spread of the virus.

Bangalore, which saw 1,907 coronavirus deaths in April, has recorded more than 950 just in the first seven days of May.

A lack of oxygen and critical care beds is being blamed for the dramatic rise in the death rate.

The city of nine million people imposed its own restrictions on movement on April 25 but this has not stopped the grim statistics.

Coronavirus cases and deaths have also shot up in West Bengal state since its election, which was marked by huge rallies organised by Prime Minister Narendra Modi and his arch-rival, state chief minister Mamata Banerjee.

The main city, Kolkata, also has a critical shortage of oxygen and beds.

There are fears that the new surge could undermine the recovery in Asia's third biggest economy.

The growing death toll has added to pressure for the government to act however.

Gandhi said in his letter to the prime minister that "your government's lack of a clear and coherent Covid and vaccination strategy ... has placed India in a highly dangerous position."

Modi had "to understand India's responsibility in a globalised and interconnected world" as "home to one out of every six human beings on the planet."

"Allowing the uncontrollable spread of this virus in our country will be devastating, not only for our people, but for the rest of the world."

The government did not immediately respond.