Indian authorities are investigating if organochlorines used as pesticides or in mosquito control caused the death of one person and hospitalization of more than 400 in the southern state of Andhra Pradesh in the past few days, a health official said on Tuesday. 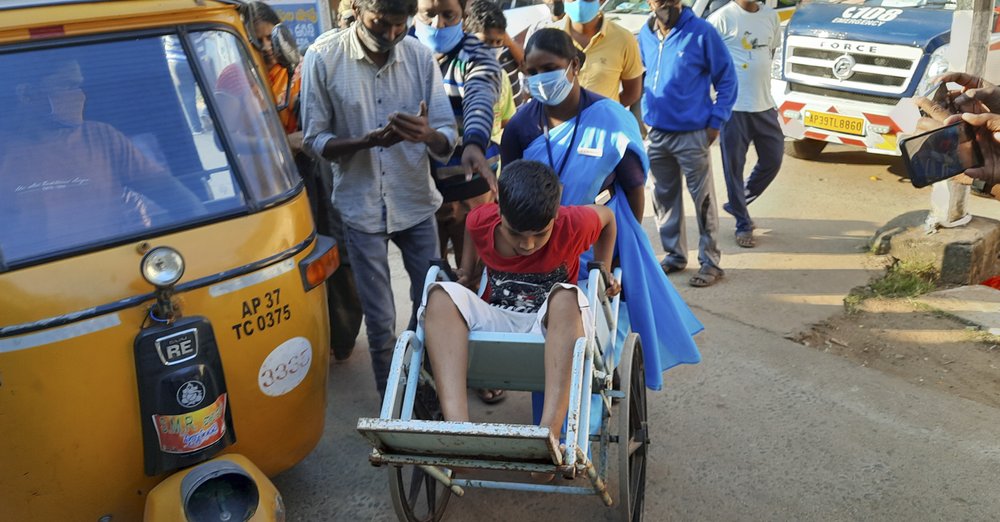 A young patient is brought in on a wheelchair to the district government hospital in Eluru, Andhra Pradesh state, India, December 6, 2020. /AP

The unknown illness has infected more than 300 children, with most of them suffering from dizziness, fainting spells, headache and vomiting. They have tested negative for COVID-19.

Federal lawmaker GVL Narasimha Rao, who is from the state, said on Twitter that he had spoken with government medical experts and that the "most likely cause is poisonous organochlorine substances."

"It is one of the possibilities," said Geeta Prasadini, a public health director in Andhra Pradesh state, adding they were awaiting test reports to ascertain the cause.

Organochlorines are banned or restricted in many countries after research linked them to cancer and other potential health risks. It was not immediately clear how extensively the chemicals are used in India, though it is found in DDT applied for mosquito control.

The illness was detected Saturday evening in Eluru, an ancient city famous for its hand-woven products in southern India. Since then, patients have experienced symptoms ranging from nausea and anxiety to loss of consciousness.

So far, one person has died and more than 400 have been hospitalized, a senior health department official said on Monday.

A 45-year-old man who was hospitalized with symptoms similar to epilepsy and nausea died Sunday evening. The patient who died had reported similar symptoms to the others, but then had a fatal but unrelated cardiac arrest, said Dolla Joshi Roy, the district surveillance officer of Eluru's West Godavari District.

"All patients have tested negative for COVID-19," said Roy. She added that about 180 patients have now been discharged, while the rest are "stable."

India has recorded 9.68 million COVID-19 infections, just behind the United States in the global tally.

Andhra Pradesh state is among those worst hit by COVID-19, with over 800,000 detected cases. The health system in the state, like the rest of India, has been frayed by the virus.

Officials are trying to determine the cause of the illness. So far, water samples from impacted areas haven't shown any signs of contamination, and the chief minister's office said people not linked to the municipal water supply have also fallen ill. The patients are of different ages and have tested negative for COVID-19 and other viral diseases such as dengue, chikungunya or herpes.

India's federal health ministry has sent a team of three medical experts to investigate the outbreak on Monday. A door-to-door survey was also underway.

"We have taken the patients' blood samples for serological investigation and bacterial investigation to rule out any type of meningitis," Geeta Prasadini, a public health director in Andhra Pradesh state, told Reuters.