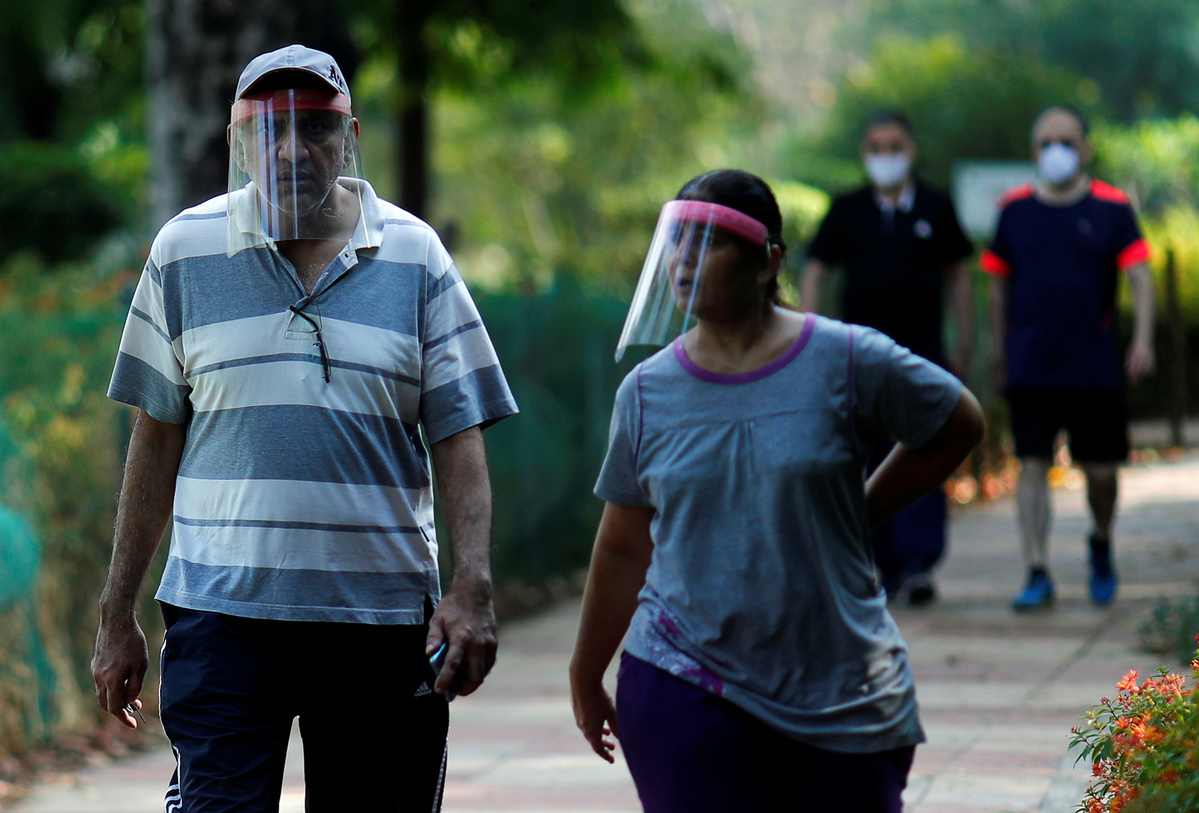 People wearing protective face shields walk inside a park after few restrictions were lifted, during an extended nationwide lockdown to slow the spread of the coronavirus disease (COVID-19), in New Delhi, India, May 31, 2020. [Photo/Agencies]

India extended its coronavirus lockdown until June 30 in high-risk zones but permitted restaurants, malls and religious places to reopen elsewhere from June 8 despite a record high number of cases detected nationwide on Saturday.

The home ministry ordered state governments and local authorities to identify "containment zones", or areas that should remain under lockdown, as they continue to report high numbers of infections.

The government said hospitality and retail sectors and places of worship would be allowed to open from June 8 and expected authorities to ensure physical distancing rules and staggered business hours.

India reported a record daily jump of 7,964 infections on Saturday and has so far recorded 173,763 positive cases and 4,971 deaths, making the world's second-most populous country ninth on the list of most infections.

In the Middle East, Iraq on Saturday imposed a weeklong curfew to curb the latest increase in infections in the country, as the total number has risen to 6,179, with 195 deaths.

The decision was made after a meeting of the Higher Committee for Health and National Safety, which took several measures, including imposing a full curfew in Baghdad and the Iraqi provinces from May 31 to June 6.

The committee ordered the security forces to tighten control of implementation of the health restrictions through preventing all forms of gatherings that contribute to the spread of the virus.

In Israel, schools will remain open despite a COVID-19 outbreak at a high school, the health ministry said on Saturday, but Prime Minister Benjamin Netanyahu warned that coronavirus curbs would be reimposed if infection rates increase.

Israel has lifted many restrictions over the past few weeks as infection rates have dropped. But they rose sharply on Friday with more than 100 new cases－the majority of which originated at one Jerusalem high school－up from only four on May 23.

Turkey on Saturday announced that it will resume domestic flights as part of measures toward normalization. The first flights will be resumed from Istanbul to some major provinces and other cities will be resumed gradually.

In Africa, Egypt reported its biggest daily rise in cases on Saturday, as the government began to gradually ease the lockdown measures.

Starting from Saturday, the curfew was reduced to 10 hours for two weeks, and then the government will consider easing the restrictions and gradually resuming some suspended activities.

Egypt's Health Minister Hala Zayed said on Saturday that the ministry has increased the number of hospitals tasked with receiving coronavirus patients to be 376 nationwide.

The first phase of the recovery for the sector will be driven by domestic tourism, followed by regional tourism and international tourism next year, said Mmamoloko Kubayi-Ngubane, the country's tourism minister.