A recent report in the Hindustan Times claimed that Bangladesh had to turn to India for help as Chinese vaccine producer Sinovac asked the Bangladeshi government to share cost of clinical trials. However, the report is different from what the Global Times has learned, and experts condemned Indian media for hyping what would be normal international cooperation on vaccine development. 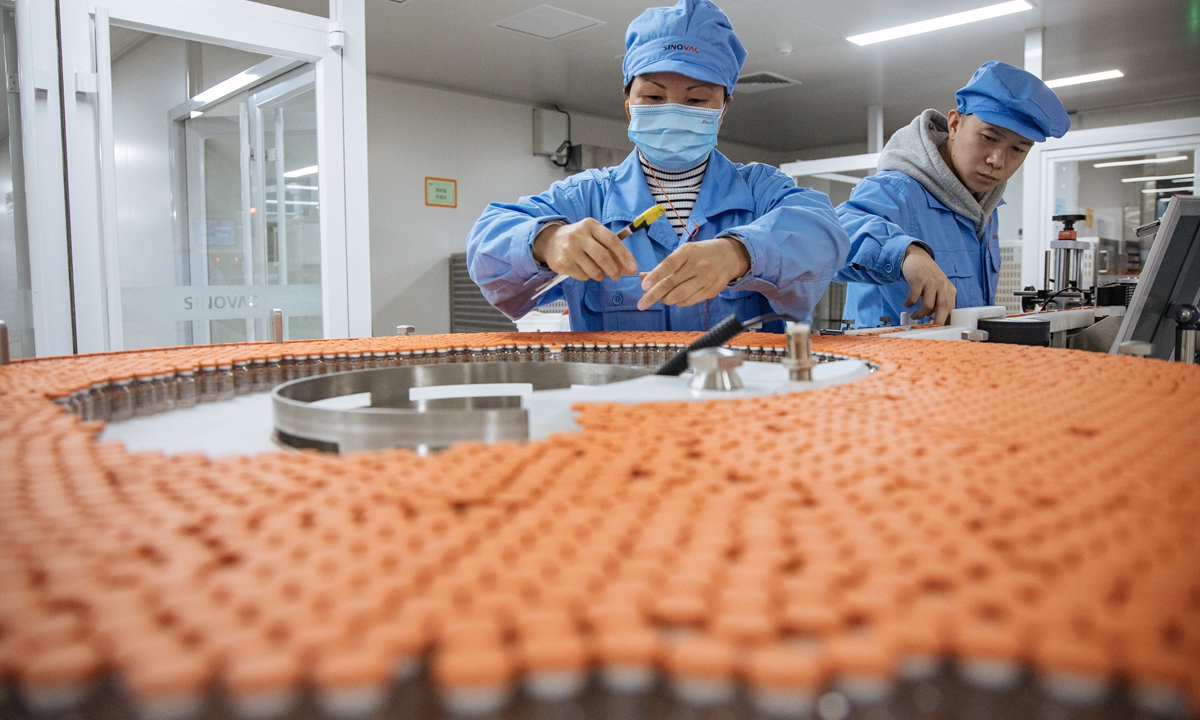 A Sunday report of the Hindustan Times claimed that Sinovac in October 2020 wanted to sign a contract with the Bangladeshi government to supply the latter with the CoronaVac vaccines developed by Sinovac.
The report said Sinovac asked the Bangladeshi government to share the cost of the clinical trials on CoronaVac scheduled in Bangladesh and said that the same condition has been put in other countries where clinical trials had been carried out. Bangladesh refused such a condition and turned to India for free vaccines, the report claimed.
However, based on previous reports and some sources, the Global Times learned that the Bangladeshi government had agreed that Sinovac conduct clinical trials on CoronaVac in Bangladesh as early as July and planned to implement the trials since August.
At that time, Bangladesh did not need to share the cost. But the clinical trials were delayed until October due to the Indian government allegedly meddling in the two sides' cooperation during the period, according to some sources reached by the Global Times.
As of October, Sinovac had kicked off clinical trials in some other countries, such as Brazil and Turkey, and could not find external financial support for the clinical trials in Bangladesh, so the company had to negotiate with the Bangladeshi government about sharing the cost to launch the clinical trials. The company had promised to provide free vaccines to Bangladesh for compensation but was refused, according to what the Global Times has learned.
In international cooperative clinical trials, it is normal for partners to share the cost based on negotiations. Usually, vaccine producers will offer to donate vaccines, or transfer some technology or help the partners build production lines as compensation, Feng Duojia, president of the China Vaccine Industry Association, told the Global Times on Tuesday.
It is normal for international partners to reach cooperation after reaching agreements, as well as normal for them to cancel cooperation if an agreement is not reached. No one should use this as an excuse to smear any of the partners, Chinese experts said.
India has been smearing China's cooperation with countries in South Asia in cooperation on the anti-epidemic fight as the region is traditionally under India's influence, Tian Guangqiang, assistant research fellow with the National Institute of International Strategy at the Chinese Academy of Social Sciences, told the Global Times on Tuesday.
"India always treats China as a simulated enemy that can affect its influence in South Asia and reduce South Asian countries' reliance on India," Tian explained.
From an economic perspective, India probably also wants to monopolize the vaccine market in South Asia, so it would like to see Chinese vaccines step out of the regional market, Tian said.