India and Pakistan signed an agreement on October 24, introducing visa-free access to Indian pilgrims to a border Sikh shrine in the Pakistani town of Kartarpur. 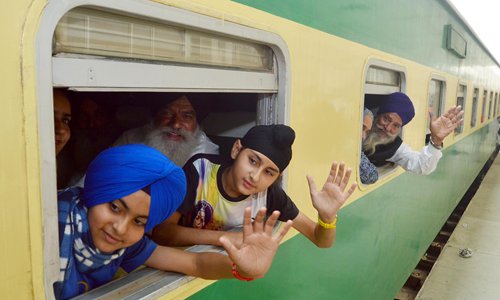 This step taken by the two rivals, amid unceasing tensions and clashes at the border, deserves high praise from the international community. It is an exchange of goodwill and progress in mutual trust, and also shows other countries how to manage differences.

The two nuclear-armed South Asian countries have been mired in long-standing territorial and religious disputes, which have led to constant conflicts.

However, the neighbors also share so much in common. Finding common ground and enhancing mutual trust is a great way and an urgent need for the two to resolve problems.

Since border disputes must be settled by governments through a long process of negotiations, non-governmental means, especially religious and cultural exchanges between the peoples, should be utilized.

A great number of Sikhs reside in India, while Pakistan's Kartarpur is believed to be a town where Guru Nanak, the founder of Sikhism, established the first Sikh commune. Opening the Kartarpur border will make it more convenient for pilgrims and strengthen exchanges.

China supports this move, and hopes that other conflicts, including the Kashmir issue, can be handled through such peaceful measures.

China has always regarded strengthening mutual trust as the basis for solving problems and applies this spirit. For example, regardless of border disputes with India, China has opened a special passage - Nathu La Pass - to receive officially organized groups of Indian pilgrims since June 2015. Over 900 Indians have entered Southwest China's Tibet Autonomous Region through this pass.

Not only that, China has adhered to such a principle in getting along with all its neighbors. On Tuesday, China invited 14 countries, including most of its neighbors and other Asian countries, to discuss boundary cooperation, in the hope of ironing out differences.

The South Asian sub-continent is of great geopolitical significance, and border issues between the South Asian neighbors are one of the major sources of regional instability. Settling border disputes between China and India, and between India and Pakistan, will be a significant foundation for the rebuilding of stability and peace in Asia in the new century. We are already making progress. If all parties can continue to enhance mutual trust, impetus for sustained peace in Asia will be injected, and the region will certainly move toward peace and prosperity.