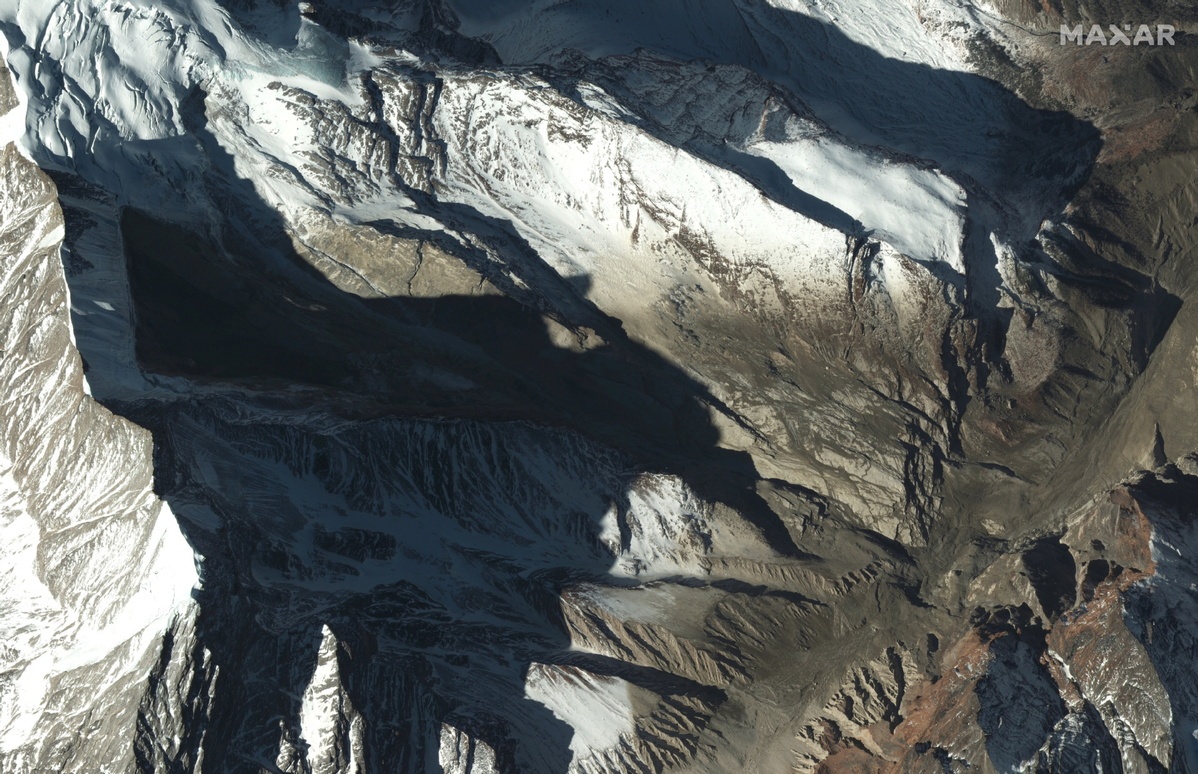 A satellite image shows a glacial area after it collapsed in the Uttarakhand region of India Feb 10, 2021. (Photo: Agencies)

A special department will be set up by the government of Uttarakhand state in India to "monitor and study all the glaciers through satellite", according to the local authorities. The move can help probe the cause of the glacier burst on Feb 7 which has claimed the lives of 67 people at least.

Over 140 others are still missing from massive flooding caused by the Nanda Devi glacier burst on Feb 7 in the Chamoli district in Uttarakhand state which borders China. Most of them are hydro projects workers and local villagers.

It also has threatened safety of the houses and lives in the neighboring areas. Nanda Devi is the second highest mountain in the country, and Nanda Devi National Park was recognized as UNESCO World Heritage Site in 1988.

Several teams of National Disaster Response Force, members of the military, paramilitary groups and police were in deployment to conduct rescue and research operation for the burst. The cause of the burst is under investigation.

United Nations Secretary-General Antonio Guterres was saddened by the loss caused by the disaster. "The secretary-general expresses his deep condolences to the families of the victims and to the people and government of India," said Stephane Dujarric, the spokesman, in a statement on Feb 13, adding that UN's ready to make effort in rescue and relief if needed. 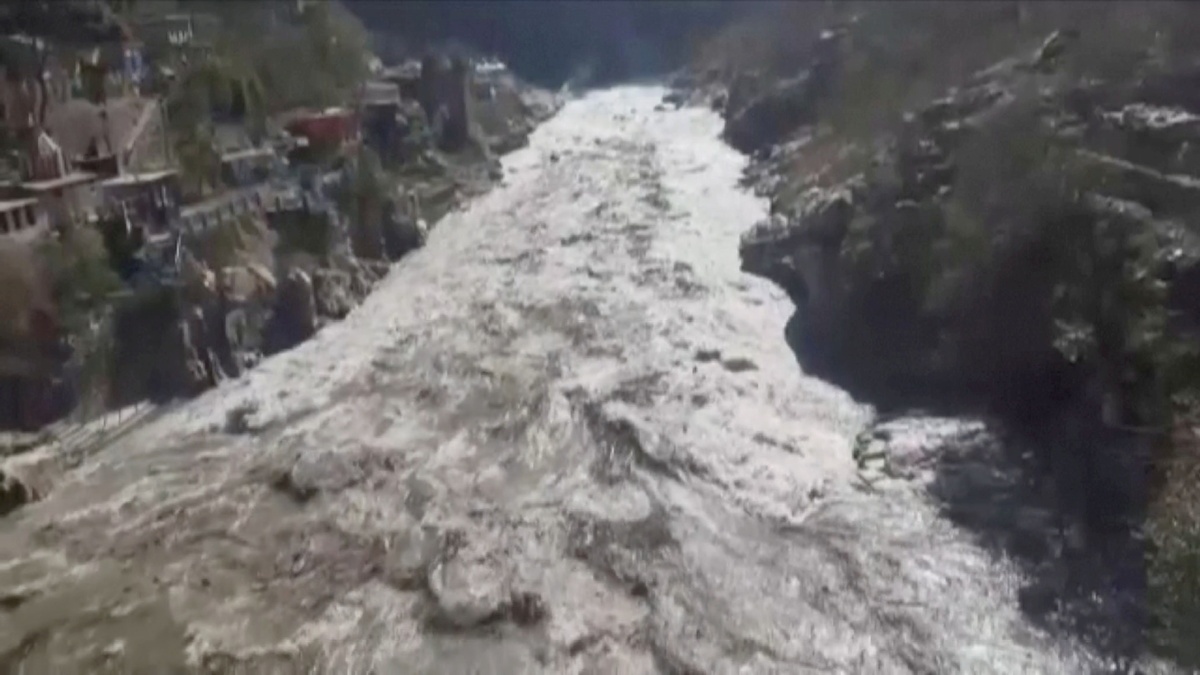 General view during a flood in Chamoli, Uttarakhand, India Feb 7, 2021 in this still image obtained from a video. (Photo: Agencies)

Dr Anjal Prakash, an environmental expert in India, said the impact of global warming on glacial retreat is well documented. The special report of the United Nation's Intergovernmental Panel on Climate Change on oceans and cryosphere, shows that climate change has altered the frequency and magnitude of the natural hazards, mentioned Prakash who was the report's coordinating lead author in 2018.

"We do not have the data now to give you information on what has caused the avalanche in the Chamoli district," he said, "But what we know, at the first sight, is that this looks very much like a climate change event as the glaciers are melting due to global warming."

The recent Hindu Kush Himalayan (HKH) Monitoring and Assessment Programme report shows that temperatures are rising in the HKH region and the rise in global temperature will have more impact in the Himalayan region due to the phenomenon temperatures are warming faster in high elevation regions than the global average.

"If the world can keep the temperature rise to below 1.5 degrees Celsius, in the HKH region it would translate to at least a rise of 1.8 C, and in some places, above 2.2 C. Himalayan regions are area also least monitored and this event actually shows how vulnerable we could be," illustrated Prakash, research director and adjunct associate professor, Indian School of Business.

"I would request the government to spend more resources in monitoring the region better so that we have more information about the change process. The result would be that we are more aware and could develop better adaptation practices," he said. 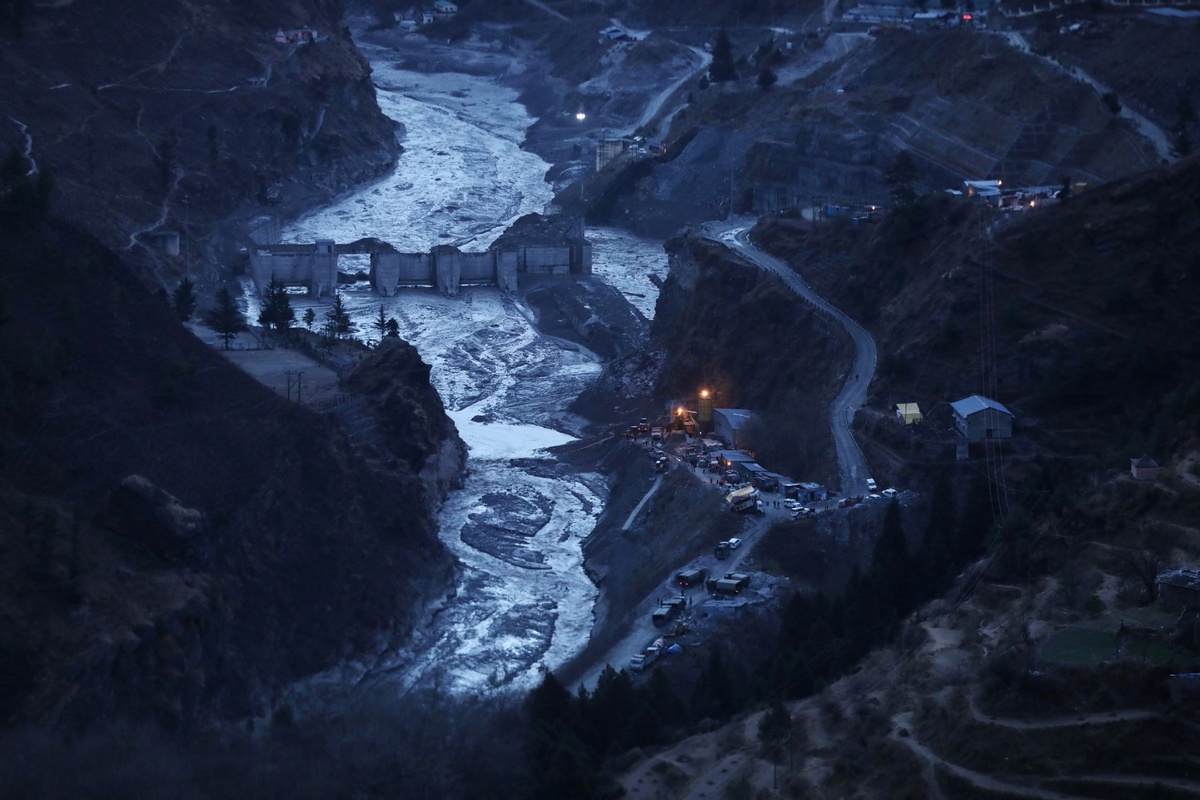 Rescue teams work during a rescue operation outside a tunnel after a part of a glacier broke away, in Tapovan in the northern state of Uttarakhand, India, Feb 11, 2021. (Photo: Agencies)

The real causes of the Indian glacier collapse could be various and complicated, according to Li Dewen, a professor at the National Institute of Natural Hazards under China's Ministry of Emergency Management. Li noted that global warming has had an effect all over the world, although the impact can be more readily seen in some areas, where the impact could be double what it is elsewhere.

"Nonetheless, the particular geography of that part of India where the glacier collapse hit made it more vulnerable to climate change's effects, where more frequent faults might be predicted," he concluded.

Li suggested the use dynamic monitoring with advanced sensor technologies, since he finds that the incident has demonstrated it is important to oversee the glacier activities in areas sensitive or prone to hazards.