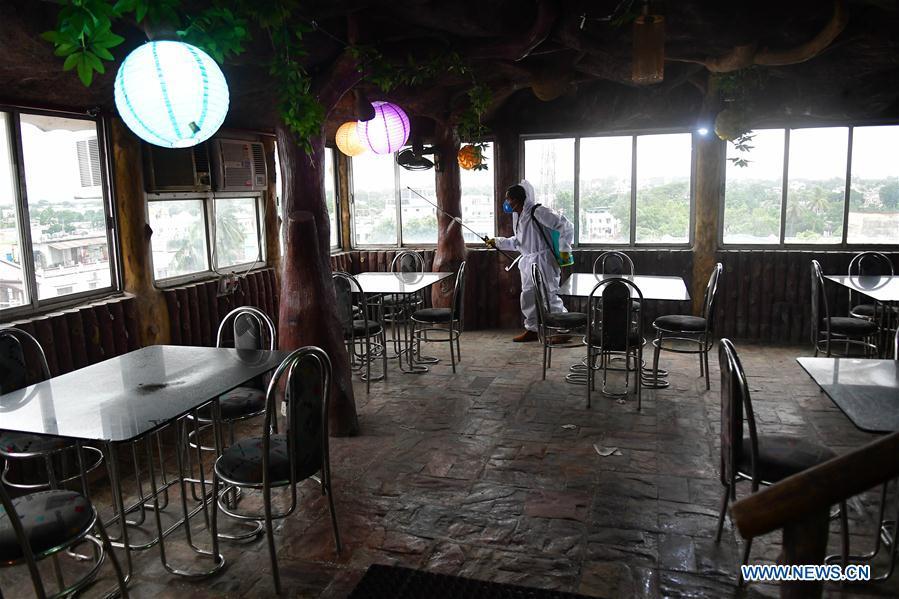 A worker sanitizes a restaurant of a hotel before its re-opening in Agartala, Tripura, India, July 10, 2020. [Photo/Xinhua]

The total number of COVID-19 cases surpassed the 800,000-mark in India on Saturday, reaching 820,916, as the total deaths stood at 22,123, according to the data released by the federal health ministry.

According to the ministry data, 519 new deaths due to COVID-19 besides fresh 27,114 positive cases were reported during the past 24 hours across the country.

This is the highest single day spike in terms of new cases in the country so far.

At the present pace, the total COVID-19 cases in India are expected to cross the one-million mark in the next week, experts said, who attributed the sudden increase in the number of cases to an increase in daily testing, and also because the country decided to open up the manufacturing and trading activities, following the lockdown beginning March 25.

As per federal health ministry's record, so far as many as 11,307,002 COVID-19 samples had been tested through the collective public and private labs under a diagnostic network of 1,180 labs in the country.

Besides 841 government-run labs, there are 339 private labs. The per day tests are demonstrating a steep upward trend, even as over 282,500 samples are tested every day. As on date, the test per million (TPM) for the country stands at 8,193, according to the federal health ministry.

Dr. Dhruv Chaudhary, the nodal officer for COVID-19 in northern state of Haryana, told Hindustan Times that the increased tests are vigorously conducted for active surveillance. "For this the central government conducted the sero-survey," he added.

"Sero-survey" involves testing blood serum of people to check for the prevalence of antibodies against coronavirus infection.

Another reason cited for the sudden spurt in cases is carelessness among the people in adopting precautions like wearing face-masks, maintaining social distancing, and regular use of hand-sanitizers.

Only on Friday, a large religious congregation was reported from the western state of Gujarat where social distancing norms were thrown to the winds.

In a bid to make it compulsory for people to wear face masks, the government of northern state of Uttar Pradesh increased the fine from 100 Indian Rupees ($1.43) to 500 Indian Rupees ($7) on anyone found roaming at a public place without face mask.

Presently the country has entered the Unlock 2.0 phase, though restrictions remain in full force inside the COVID-19 Containment Zones. Due to the reopening of several manufacturing and economic activities across the country, people have started moving out of their houses, even as usual crowds are once again visible at the market places.

Meanwhile, according to the federal health ministry, across the country the fatality rate has improved to 2.72 percent, which though is said to be lower than that observed in many other countries.

A day ago, federal health minister Dr. Harsh Vardhan was quoted as saying that community spread of the virus hasn't been reported yet from any part of India.

The focus of COVID-19 management in India has been to keep the fatality rate low.

Last week, the country's civil aviation watchdog, the Directorate General of Civil Aviation (DGCA), announced that commercial international flights to and from India shall remain suspended until July 31.

Uttar Pradesh, the country's biggest state in terms of population, is observing a weekend lockdown from Friday night till Monday morning, to cut the chain of transmission of the virus.

Local governments at several other areas have too decided to impose a lockdown amid increasing incidence of the virus cases.