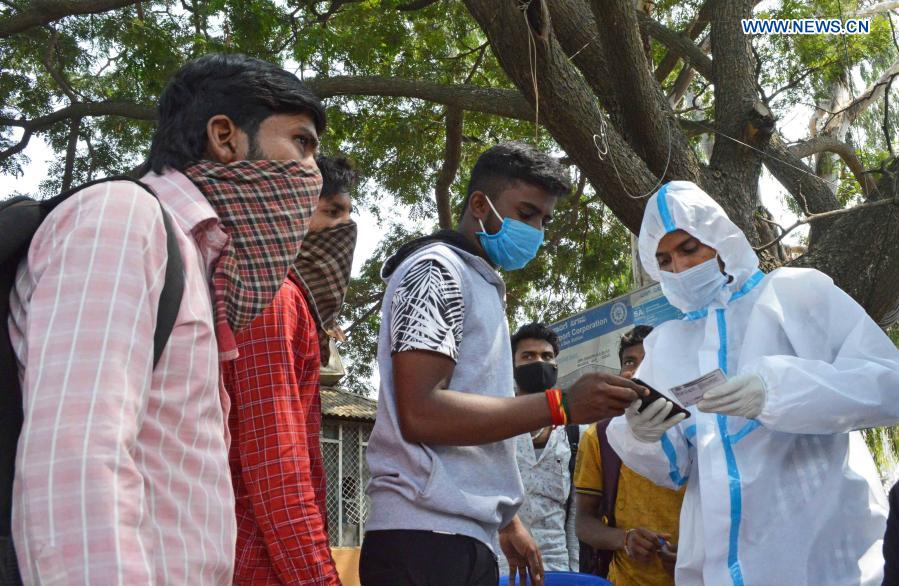 Travellers register themselves with a health worker before getting swab testings for COVID-19 outside a bus station, in Bangalore, India, Feb. 17, 2021. (Str/Xinhua)

According to the official data, the death toll mounted to 156,385 as 83 COVID-19 patients died since Sunday morning.

There are still 150,055 active cases in the country, while 10,699,410 people have been discharged so far from hospitals after medical treatment.

There was an increase of 4,421 active cases during the previous 24 hours. The number of active cases in India have been on the rise for the past five consecutive days.

India's nationwide vaccination drive was kicked off on Jan. 16, and over 11 million people, mainly health workers, have been vaccinated across the country.

Meanwhile, the federal government has ramped up COVID-19 testing facilities across the country, and nearly 211 million tests have been conducted so far.

The national capital Delhi, one of the most COVID-19 affected places in the country, has been witnessing comparatively fewer cases over past several months. As many as 145 new cases and two deaths were registered in the national capital through Sunday.

So far as many as 10,900 people have died in the national capital due to COVID-19, confirmed Delhi's health department.

Two types of vaccines are being administered to the people in India. While the Covishield vaccine, made by the Serum Institute of India (SII), was supplied to all states, the Covaxin vaccine by the Bharat Biotech International Limited was supplied to some states.