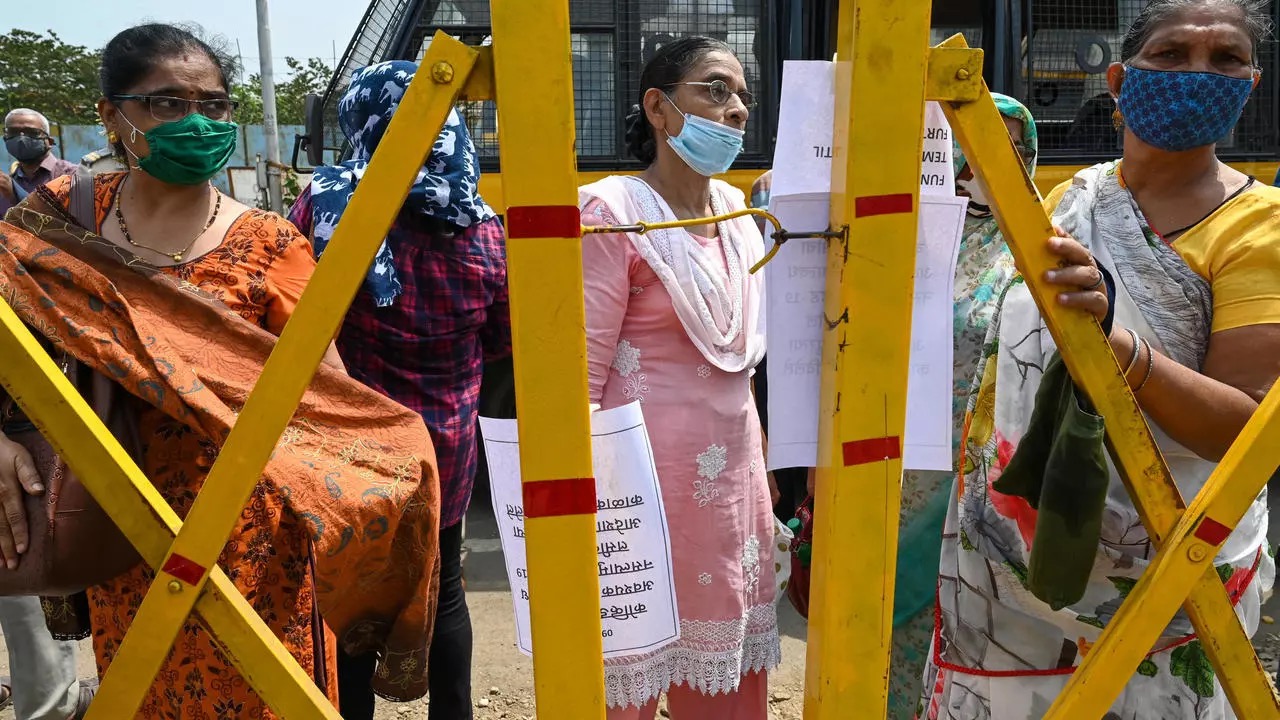 People in Mumbai stand behind a barrier outside a COVID-19 coronavirus vaccination centre after jabs were stopped due to shortage. (File photo: AFP)

The nation of 1.3 billion is confronting a ferocious second wave that has brought the fastest infection rate since the pandemic began, with nearly 132,000 cases recorded in the past 24 hours.

In the financial and film hub of Mumbai, one out of three private hospitals administering jabs ran out of supplies Thursday, city authorities said.

The situation at government-run inoculation centres was not much better, with a giant 1,000-bed field hospital turning away people arriving for their first dose on Friday morning.

"There is a shortage of vaccines so the programme has been halted," Heeba Patwe, a doctor at a facility inoculating 5,000 people daily, told AFP.

The Times of India reported that states on average had just over five days of stock left, according to health ministry data, with some regions already grappling with severe shortages.

The health minister of Maharashtra state, the epicentre of the pandemic, warned on Wednesday that it would not be able to continue vaccinations beyond the weekend unless stocks were replenished.

In the state's badly hit city of Pune, two leading private hospitals told AFP they had run out of vaccines and would be unable to inoculate anyone until fresh supplies arrived.

"We halted vaccinations yesterday and we expect to remain shut for the next two or three days," an official at Pune's Noble Hospital said Friday.

Deepak Baid, president of the Association of Medical Consultants in Mumbai, told AFP the situation was becoming increasingly dire.

"Vaccination is the need of the hour, it is the best weapon we have against Covid," he said.

As infections have soared, authorities have imposed fresh lockdowns in a bid to contain the crisis, with Maharashtra set to enter a weekend lockdown Friday evening.

The eastern state of Chhattisgarh on Friday announced a 10-day lockdown in Raipur district, home to the regional capital, warning that no one would be allowed to enter the area unless performing essential services.

Poorer countries, as well as some rich nations, have relied heavily on Serum for supplies of the AstraZeneca vaccine, but last month New Delhi put the brakes on exports to prioritise domestic needs.