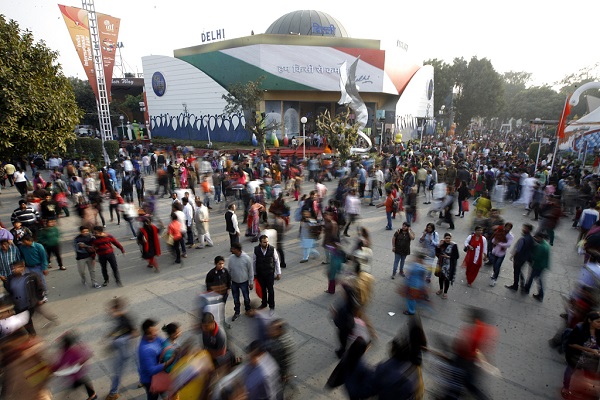 India on Saturday night officially announced to hike import taxes on as many as 28 American goods following the United States ending preferential trade treatment for India.

By imposing the hiked tariffs, India would earn about 217 million U.S. dollars additional revenue from such imports, which is equivalent to what the United States would pocket by imposing higher tariffs on imports of steel and aluminum from India.

In a "Notification" issued by the Department of Revenue of the Ministry of Finance late Saturday night, the Indian government said that customs duty was hiked on as many as 28 American products, thus making these items costlier in the Indian market.

The items include almonds, apples, acids and chemicals, official sources from the ministry said.

Earlier, the list comprised 29 items, "but one item has been dropped," an official from the country's Ministry of Commerce and Industry said. India removed "Artemia," a kind of shrimp, from the list.

Amending its earlier notification issued on June 30, 2017, the Central Board of Indirect Taxes and Customs (CBIC) under the Finance Ministry's Department of Revenue said last night that the fresh Notification will implement the imposition of retaliatory duties on 28 specified goods, originating in or exported from the United States, and preserve the existing MFN (most favored nation) rate for all these goods for all countries other than the United States.

The Indian government on June 21 last year decided to impose these duties in retaliation to the U.S. decision of significantly hiking customs duties on certain steel and aluminium products.

In March 2018, the United States imposed 25 percent tariff on steel and 10 percent on aluminium products. Earlier, there was no duty on these goods. This had pushed India to impose retaliatory tariffs on U.S. products in a bid to come at par with the United States in terms of additional custom duty "earnings."

According to official sources from the government, the country had delayed imposition of customs duty at least eight times in the hope that the U.S. administration would budge.

Finally, India decided to "implement the imposition of retaliatory duties on 28 specified goods originating in or exported from U.S.," the official sources said.