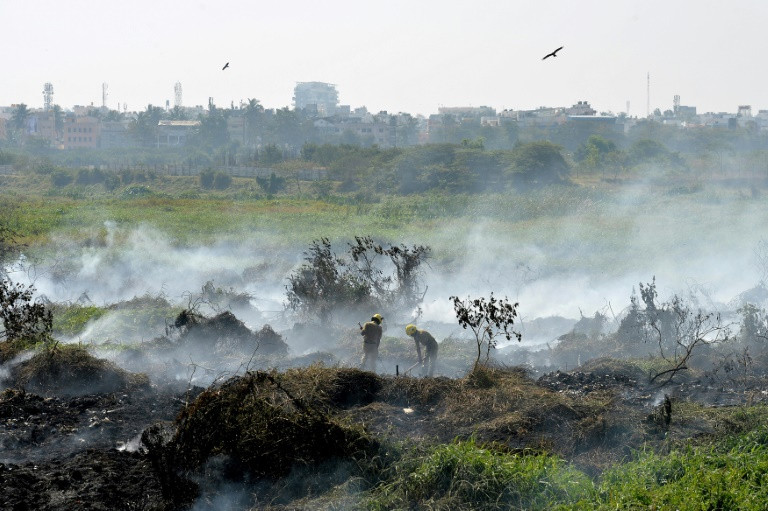 Firefighters work at the polluted Bellandur Lake that has become so toxic it spontaneously catches fire.(Photo: AFP)

Every day more than 1,000 water tankers rumble past Nagraj's small plywood store in Bangalore, throwing up clouds of dust as they rush their valuable cargo to homes and offices in India's drought-stricken tech hub.

Gleaming new apartment blocks are still springing up all over the city known as India's Silicon Valley -- even though there is nowhere near enough mains water to supply those already living and working there.

Many rely entirely on supplies shipped in by tankers filled from giant borewells that have caused groundwater levels to plummet, sparking predictions Bangalore could be the first Indian city to run out of water.

"There is a severe scarcity of water here," said Nagraj, 30, who moved to the suburban neighbourhood of Panathur a decade ago and has seen it transformed by rampant construction.

"The future will be very difficult. It is impossible to imagine how they will find water, how they will live. Even if we dig 1,500 feet (450 metres) down, we are not getting water."

Panathur lies next to Bangalore's biggest lake, Bellandur, which provides a poignant reminder that things weren't always like this.

Once known as India's garden city for its lush green parks, Bangalore was built around a series of lakes created to form rainwater reservoirs and prevent the precious resource from draining away.

Many have now been concreted over to build apartment blocks with names like Dream Acres and Strawberry Fields to house the workers who have flocked here during India's outsourcing boom.

Many of those that remain are heavily polluted. Bellandur has become so toxic it spontaneously catches fire, and emits clouds of white froth so large authorities have had to build barriers to keep it from spilling onto the road.

"The city is dying," says T.V. Ramachandra, an ecologist with the Indian Institute of Science who has predicted the Karnataka state capital could be the first Indian city to follow Cape Town in running out of water.

"If the current trend of growth and urbanisation is allowed (to continue), by 2020, 94 percent of the landscape will be concretised."

Already, more than half of Bangalore's estimated 10 million inhabitants have to rely on borewells and tankers for their water because there isn't enough mains supply to go round.

Most of the city's municipal water is supplied by the Cauvery river, whose waters flow through Karnataka and neighbouring Tamil Nadu state before emptying into the Bay of Bengal, and have been bitterly disputed for more than a century.

Two years ago, an order to release extra water from the river to ease a shortage threatening crops in Tamil Nadu sparked deadly protests in Bangalore that forced hundreds of companies to close.

Ecologist Ramachandra says Bangalore has enough annual rainfall to provide water for its estimated 10 million people without resorting to borewells or rivers -- if only it could harvest the resource more effectively.

"If there is a water crisis, we should not think about river diversion. We should think about how to retain the water," he said, blaming "fragmented, uncoordinated governance" for the crisis.

As in the rest of India though, there is little incentive for citizens to save water.

Despite years of drought, the government still provides clean water to citizens at heavily subsidised rates and access to groundwater is largely unregulated.

"In Bangalore 1,000 bottles of the cleanest treated water comes to our doorstep and we pay only six rupees (about nine cents)... the incentive is not there," says A.R. Shivakumar, a senior scientist with the Karnataka State Council of Science and Technology.

Despite this, Shivakumar and his family have not used a single drop of mains water in the 23 years they have lived at their home in Bangalore.

Instead they rely entirely on rainwater collected through gutters and stored in large tanks under the house, which Shivakumar designed with water efficiency in mind. Even the cement used to build it was made with recycled water.

His work setting up rainwater harvesting at bus stops, in slum housing and even along the city's metro system proved so effective that city authorities now require all new housing developments to have inbuilt systems.

"This crisis will force everyone to take up measures like rainwater harvesting and water conservation measures," he told AFP.

"The new generation have shown a lot of concern toward the environment and conservation measures. That will definitely take it forward. Awareness is already on the increase."